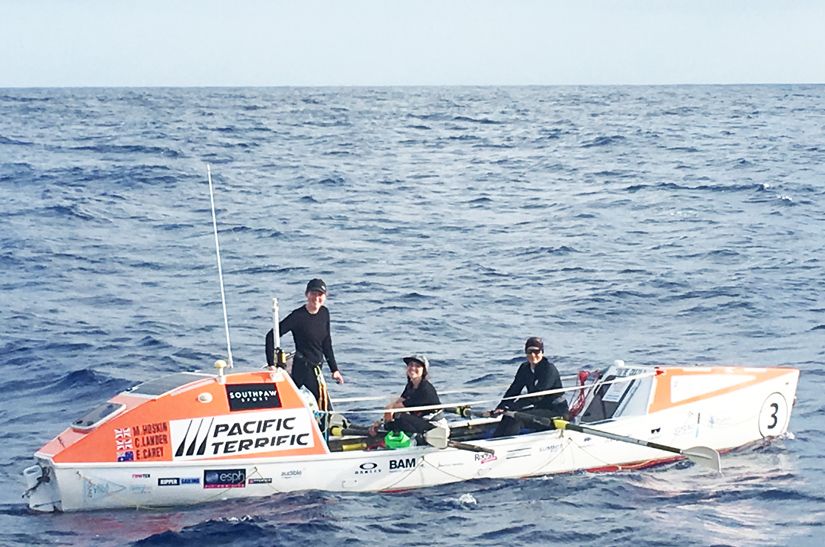 Two years ago, I stepped onto a seven metre ocean rowing boat with two fellow crew mates. We spent the next 62 days at sea, rowing in shifts of three hours on, three hours off non-stop, 24 hours a day making our way by human power the 5000km from Monterey, California to Honolulu, Hawaii. It was a gruelling experience where I struggled with sea sickness for the first seventeen days. We rowed through a tropical storm and two hurricanes. I grew up in country Queensland and had only seen 40 foot waves on movies until I found myself facing them in real life. By combination of hard work and a dash of luck, we succeeded in our journey and set two world records in the process.

Since then, I have spent my time delivering talks based on my adventures, focusing on the elements of high performance, resilience and decision making as there are so many applications to everyday life. The part of the row that I never thought would be applicable to the wider community was being in isolation and how to function in that environment for an extended period of time. Now as we find ourselves in the midst of this global pandemic this has been the new focus of my attention.

One of the things that has stood out to me the most is the phases of adapting to an extreme adventure are exactly the same as adapting to life in isolation. The thing to note is, everyone will move through these phases at a different pace. What is right for one person isn’t necessarily what’s right for the next. As I see it, these are the phases that we have been moving through and are yet to move through as things continue to develop on our real life, current journey.

Phase one: Overwhelm and shock

Phase one is characterised by the shock and overwhelm of the new environment, as well as a myriad of other emotions. The most important thing to note is that whatever the reaction, it is valid and justified and there is no right or wrong way to respond. I remember this feeling well when I set foot onto that boat and my entire world had changed. All of the ways I usually did things were gone. All of the people I usually saw and had access to weren’t there anymore, and I had no idea how long it would last for. I had no idea if I was capable of handling this new environment and living in it. I was overcome with anxiety and overwhelm, and these are also the hallmarks of what many people have experienced when the initial lock down and restrictions came into place in mid to late March.

Phase two commences when the initial overwhelm of the sudden change in environment have calmed down somewhat. For me in our ocean rowing journey, the rigorous shift patterns, lack of sleep and sea sickness meant it took me about three weeks to progress from phase one to phase two - adaptation. In that stage, we are able to somewhat accept the new state of being. On the boat, it meant getting my head around the demands and schedule of our daily life, but doing those new tasks and processes still took an increased amount of thought and effort. In present times, this expresses as trying to sort out and understand how to get our work done from home, how to share our physical space with others, learning new platforms and technology, figuring out how to socialise with friends and loved ones without seeing them. It is the phase where everything is getting figured out one step at a time, as each situation arises and responding to it on an as needed basis. This phase can still be highly emotional and challenging, but for different reasons than in phase one.

Phase three is characterised by having found the rhythm. It is more calm. We gain some of our head space back. On the boat, it took me six weeks to get to this stage where everything felt routine and familiar. Six weeks to have gone through the motions over and over again until getting ready for a row shift was automatic, making a meal was easy and my body had completely adapted to rowing for twelve hours a day every day. My mind was then free and able to return to big picture thinking and more easily able to relax. This is the phase that many people are entering into now after a significant period of time in isolation. Many of us might feel like we are just starting to figure it out and get good at it when there begin to be talks of restrictions easing!

Along with this, come another wave of emotions and feelings. Whether you are elated at the prospect of returning to normal or whether it makes you feel anxious - they are both valid. Perhaps you even feel guilty for having the thought that you wish the isolation period wouldn’t come to an end so soon. If so, let yourself off the hook. Many of these feelings, I believe, are due to having successfully progressed through these phases and along with the easing of restrictions, you know that the work begins all over again.

Phase one will occur when the majority of the restrictions have eased, though it is likely this will come in waves rather than all at once. This moment is like when we got to step off the boat, onto the dock in Hawaii for the first time in 62 days. It was emotional. We were relieved, but also I remember being a bit overwhelmed and scared. We hadn’t seen anybody for two months, hadn’t had our phones or the internet or real food. So alongside the rush we got from having access to all these people again - it was extremely loud and noisy. On a number of occasions, I did wish I could be back on the boat again in what became a quiet, comfy (of sorts), cave of solitude. Much like our homes are for us now. In this time, I just took things slowly and re-assimilated at the pace that suited me. I retreated often and had my phone off a lot. However you respond in this time isn’t right or wrong, it’s just your way of dealing with it. Be kind to yourself no matter your response.

Phase two is adaptation again. Learning how to function again in your workplace, in your social life, in your home. Reclaiming those spaces and adjusting to the hour long commute again, and all the positives and negatives that come with each and every aspect. Maybe the adaptation will be fast, maybe it will be slow, but we will all get there. This period of adaptation will also be an exceptional opportunity, if taken advantage of correctly, to be able to blend the two versions of your life. Your iso life and your regular life, to keep the elements that you value the most and eliminate the ones that don’t serve you. It is an opportunity to re-calibrate and have a version of your life that is better than ever before. For me, adapting to regular life after the boat was very much about trying to maintain the mental clarity and calmness that had been achieved out there, through keeping high levels of physical activity and still spending as much time as possible in the outdoors.

Finally, there will be the return to normal, phase three. This is when the period of isolation and lock down will seem like a strange dream and you might wonder if it even happened at all. Life will be back to your usual, mostly, save for the active changes you sought to keep in the re-assimilation and adaptation phase. Living on the boat was such a beautifully bizarre and abstract experience, that if it weren’t for the photos and records of that journey, I probably wouldn’t have believed it was my real life for a period of time. I believe a similar sentiment may occur in this instance as well.

So then, wherever you are among these phases, know that your response is normal, valid and that there is light at the end of the tunnel. May you and your loved ones stay safe and sane through these times.