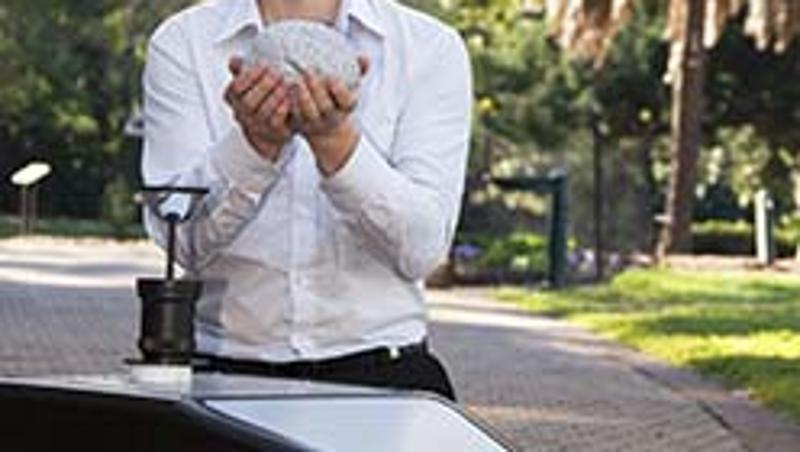 Computer modelling of the human eye, the brain of a rat and a robot could revolutionise advances in neuroscience and new technology, says a QUT leading robotics researcher.

"This is a very Frankenstein type of project," Dr Milford said.

"It's putting two halves of a thing together because we're taking the eyes of a human and linking them up with the brain of a rat.

"A rodent's spatial memory is strong but has very poor vision while humans can easily recognise where they are because of eyesight," he said.

"We have existing research, software algorithms in robots to model the human and rat brain.

"We'll plug in the two pieces of software together on a robot moving around in an environment and see what happens."

The research has been published in the British journal Philosophical Transactions of the Royal Society B.

Dr Milford said the research would also study how the human brain degrades, in particular how it fails to recognize familiar places.

"The brain's spatial navigation capabilities degrade early in diseases like Alzheimer's," he said.

"So it has relevance as a potential study mechanism for studying mental disease as well."

He is one of Australia's leading experts on developing technology to visually recognise locations and is chief investigator at the QUT-based headquarters of the Australian Research Council Centre of Excellence in Robotic Vision.

Dr Milford said place recognition is a key component of navigation but the technology to date is limited.

"Current robotic and personal navigation systems leave much to be desired," he said.

"GPS only works in open outdoor areas, lasers are expensive and cameras are highly sensitive but in contrast, nature has evolved superb navigation systems."

Dr Milford said drivers could miss or take the wrong exit because personal navigation systems didn't work in tunnels because there was no satellite signal.

"That's an example of one of many ways we'd like to create really cool, useful technology," he said.

He said the research project could have benefits for manufacturing, environmental management and aged health.

"We have very sophisticated models of human vision and a rat's brain, which are already state of the art.

"We've got all the ground work there but plugging them altogether is the massive challenge we have.

"I don't know exactly how it's going to work and that's why it's research."

The interdisciplinary research project involves collaborations between QUT and the University of Queensland and other top international institutions including Harvard, Boston and Antwerp universities.

The future fellowship is worth $676,174 over the next five years.