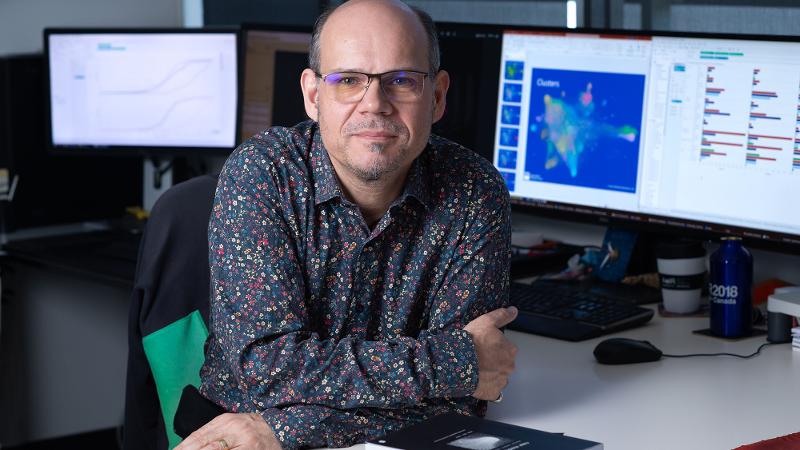 A project inspired by nature and robotics to give Australia greater GPS satellite autonomy, and another examining the impact of polarisation across online environments have earnt each of the QUT lead researchers a prestigious Australian Laureate Fellowship.

Announced today (7 July) by Federal Education Minister Alan Tudge, Professor Axel Bruns from QUT’s Digital Media Research Centre will receive $3,518,080 from the Australian Research Council (ARC) for his project Determining the Drivers and Dynamics of Partisanship and Polarisation in Online Public Debate, while Professor Michael Milford from QUT’s Centre for Robotics has been granted $2,716,041 for his Re-Evolving Nature’s Best Positioning Systems for People and Their Machines project.

"They are a testament to the excellence of each researcher and their respective research teams, both of which are embedded in two of QUT’s flagship research centres, underpinning our position as a leading institution with real world impact."

Professor Bruns said escalating partisanship and polarisation, particularly via online and social media platforms, presented an urgent challenge for western democracies including Australia and a threat to cybersecurity worldwide.

The five-year Laureate Fellowship project will conduct the first-ever assessment of the extent and dynamics of polarisation in the contemporary online and social media environments of six nations - Australia, the US, the UK, Germany, Denmark, and Switzerland.

“We aim to enable an urgently needed defence of our society and democracy against the challenges of polarisation,” said Professor Bruns, a recognised world leader in media, communication, and journalism studies, with a particular focus on the evolution of online communication practices.

“Australia has so far been less affected than other leading democracies, but we are not immune to creeping polarisation and subsequent destabilisation. We must understand the threats we face.

“By developing the evidence base for the dynamics of polarisation in news coverage, audience engagement, public discourse, and social networks, we will identify avenues for avoiding and reducing it in Australian society, safeguarding national cohesion.

“Much recent debate still looks for the drivers of polarisation in all the wrong places. Such perspectives see platform algorithms as creating ‘echo chambers’ or ‘filter bubbles’ that lock users into partisan communities with diametrically opposed views and ideologies.

:But as I showed in my recent book Are Filter Bubbles Real?, this ignores the fact that even extremely polarised groups follow mainstream debate very closely and in fact exploit the very absence of echo chambers to maximise the reach of their messaging.”

Professor Milford, meanwhile, will use his Laureate Fellowship to transform positioning technology for Australia’s key industries using automation and robotics, as well as reduce our reliance on GPS satellites owned by other countries.

“We hope to create positioning technologies which complement GPS and are widely applicable, from an autonomous vehicle on our streets all the way to a robot roaming our fantastic natural environments,” said Professor Milford, Acting Director of QUT's Centre for Robotics, and known for his interdisciplinary research at the boundary between robotics, neuroscience, and computer vision.

“The natural world is full of amazing examples of superb navigators – from insects to animals to people. By taking inspiration from the best of the natural world and combining that with new algorithms and robotic techniques, we are looking to create new breakthrough positioning capabilities which will boost our country’s economy and security.

“We plan to re-evolve, re-engineer, and blend the best performing and best understood components of nature’s best positioning systems with new technological advances in sensing and computation to create more efficient, cheaper ways to move people and things around.

“The expected outcomes are focussed on improving the competitiveness of Australia’s leading industries and providing the positioning reliability required by the defence sector to keep Australia secure.”

Professor Milford also plans to leverage the Fellowship to increase his award-winning outreach and engagement activities with the Australian and international public.

“Receiving this Australian Research Council support is incredibly important, not only because it supports me but because it enables me to further grow the critical mass of Australian-based research talent and industry collaborations,” he said.