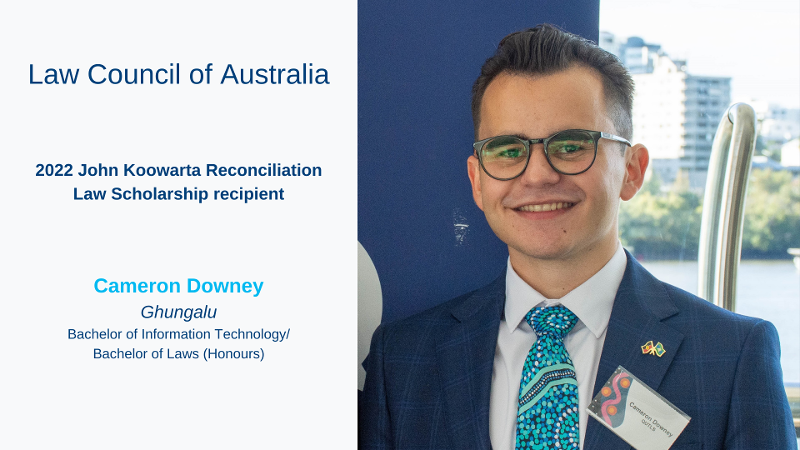 The John Koowarta Reconciliation Law Scholarship is a national scholarship dedicated to promoting the study of law and legal practice to Aboriginal and Torres Strait Islander people.

The scholarship honours John Koowarta, a Winychanam Elder from the Queensland Indigenous community of Aurukun and a traditional owner of the Archer River region on Cape York Peninsula, who pioneered Aboriginal land rights in Australia during the late 1970’s and early 1980’s. He was described by former Commonwealth Minister for Aboriginal and Torres Strait Islander Affairs, as “an Australian hero who was a courageous fighter against Governments which discriminate against people on the basis of race.”

“It is a privilege to present the 2022 John Koowarta Scholarship to Mr Downey and Ms Burchill,” Dr Brasch said.

“Cameron and Michelle are exceptionally talented law students who show great promise. I look forward to watching their professional careers develop over the coming years.”

A proud Ghungalu man, Cameron Downey is currently studying a double degree, Bachelor of Information Technology/ Bachelor of Laws (Honours). With less than two years to go until he graduates, Cameron plans to combine both disciplines in his career. Cameron’s goal is to create and design digital systems that will give rural and remote Indigenous communities better access to the justice system.

Cameron spent his childhood moving around Queensland and understands what it is like living in remote parts of the country. From small central Queensland town Capella to far-north Georgetown then Queensland’s south-west Roma. Graduating from Roma State College in 2016, Cameron was determined to make it to university. Only 11% of the students from Roma State College in his graduating year went onto tertiary study, and only 10% of Indigenous students received an OP.

“To be a recipient of the 2022 John Koowarta Reconciliation Law Scholarship is a tremendous honour, not just for me personally, but my family, community, and university. This scholarship will serve as a useful foundation for my career in the legal profession and I hope that one day I can make a valuable contribution to the Australian legal landscape,” said Cameron.

Highly involved in university life, Cameron has travelled across the country and the globe representing QUT attending the National Indigenous Legal Conference in Perth in 2018, and the Global Legal Forum in The Hague, Netherlands in 2019.

Cameron teamed up with Wyatt Cook-Revell in the Aboriginal and Torres Strait Islander Students’ Moot in 2019. They finished as runners up and won an award for best written submission.

In 2021, Cameron served as QUT Law Society’s First Nations Officer and participated in the Vacation Research Experience Scheme (VRES). Supervised by Professor Dan Hunter and Professor Kieran Tranter, his VRES experience led to the publication of ‘Review of Roger Brownsword’s Law 3.0: Rules, Regulation and Technology’ in the academic journal, Law, Technology and Humans.

Professor Dan Hunter, Dean of Law, and Cameron’s supervisor for his VRES project said Cameron’s research on the intersection of technology and legal regulation for automated marine drones, “promised to help us find the way forward in this important topic.”

Adding that the QUT Law School is, “thrilled for his win.”

“He is a worthy recipient and a rising leader. We couldn’t be prouder of him, congratulate him on the recognition of this award and look forward to all his successes.”

Cameron says the scholarship will provide him with the financial support that will enable him to work less and focus more on his study. As one of only a few recipients from QUT to be awarded the scholarship Cameron says has made the achievement more meaningful, “Given not only the Scholarship’s namesake but what previous recipients have gone onto achieve, to be considered in the same league as those other recipients is incredible.”

Cameron's advice to students is to apply, apply again if you are unsuccessful and not to be dissuaded from applying if their results aren’t perfect, “opportunities like this are too good not to try again.”