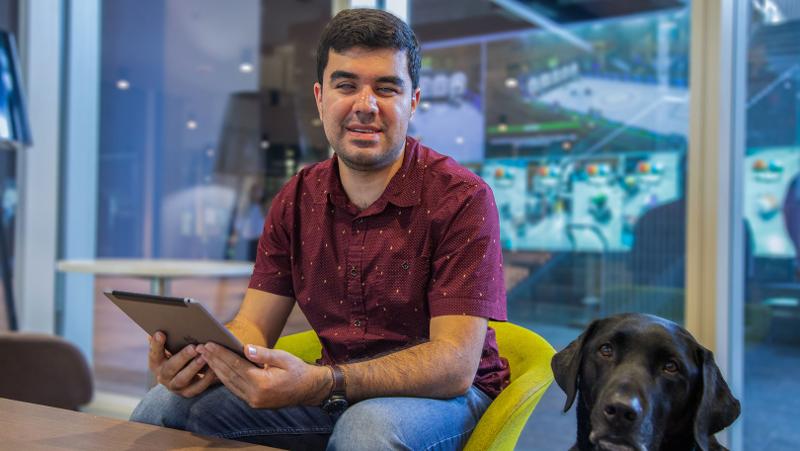 On any given week Santiago Velasquez is a QUT electrical engineering student, entrepreneur, researcher - and Australian representative to the United Nations advocating disability rights.

This week he is also a budding philanthropist helping people achieve independence.

Santiago was born in Colombia with impaired vision, immigrating with his family to Australia where he could better access education and independence.

Twenty years later, he is paying it forward – helping others around the world find education, independence and greater opportunities through technology.

Santiago worked with the QUT Science and Engineering Faculty to identify disability-accessible technology (32 iPads) from stock turnovers and donate these to Comfenalco Quindío - a social support service in his Colombian home town.

“In Colombia if you went to where I'm originally from, Quindío, there is no school that has any resources to assist people who have a vision impairment,” Santiago said.

“There is only one centre that has a few pieces of equipment that can print out Braille, and magnifiers for people to see documents, but it's all up to the teacher, student and parents to figure it out if they want something.

“It's a developing nation and because the income isn't as good as it can be, then the resources - because of their price - most people don't have them.”

By donating the iPads, which have built-in screen readers, Santiago hopes Colombians with impaired vision will also have access to more choices.

Outside of his studies, Santiago works on projects that address daily tasks most of us take for granted – such as using public transport or looking at pictures.

In partnership with MIT alumni, he drives project Hailo – which aims to develop a system that remotely alerts the bus driver when a visually impaired person wants to board the bus.

Through a separate project, EyeSyght, he focuses on developing a tactile visual display to help the vision-impaired access graphical content.

“The problem we're solving has to do with accessing information if you're blind and if you want to work with anything that is graphical.

“We've been working with the support of QUT, Vision Australia, Google, MIT and other companies and organisations around the world to develop this technology that hopefully will enable people with vision impairment to access the digital and physical world independently and efficiently.

“At the moment the biggest problem when talking about disabilities is that if you don't have access to the information, well, how are you supposed to work with it?

“I need a solution like this and there are more than 285 million people around the world who also need it, so I thought it would be a good problem to tackle.”

In recognition of the extraordinary challenges Year 12 students are facing due to COVID-19 disruptions, QUT will now accept VET qualifications (Certificate IV and above) for entry in 2021 for any student who completes Year 12.

If you know a high-achieving Year 11 or 12 student who would like to get a taste of university life while in high school, they can apply to take part in START QUT. Applications for Semester 2, 2020 are now open and will close on 31 May, 2020.