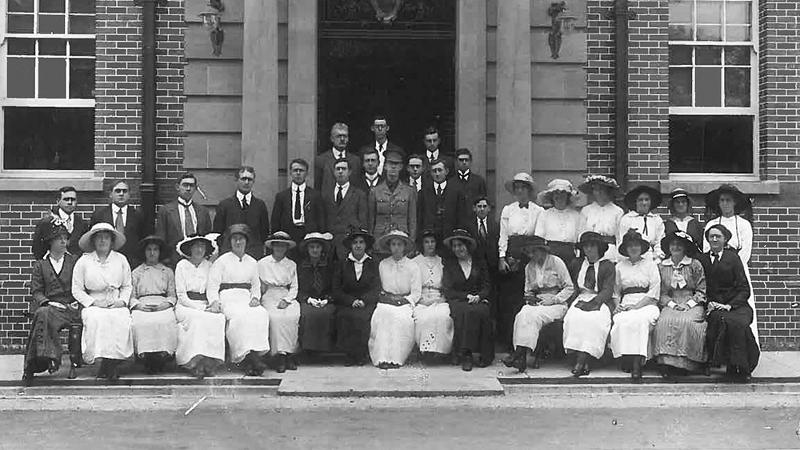 There’s bravery, sadness and determination hidden in this war-time photo that was taken outside A Block at the Central Technical College (now QUT) at Gardens Point in Brisbane in 1914.

World War I was raging, but education carried on.

Among the staff and students pictured are a young soldier who would go on to capture an enemy tank in France, and a man who would lose his son at Gallipoli.

The photo is preserved in the QUT Digital Collections and was taken in November 1914 by Hollingsworth Studios.

The man in uniform in the middle is James Alexander Robinson, a young teacher who’d just started work at the Queensland Teachers’ Training College, but would soon ship out overseas on war service.

The college was one of QUT's predecessor institutions, and began training teachers in 1914 from a temporary location in the Central Technical College at Gardens Point.

According to QUT research, 460 teachers from across Queensland enlisted during World War I and, of these, 174 were either killed or wounded in action. The war started just after Queensland opened its first high schools in 1912 and started training secondary teachers.

Lieutenant Colonel Robinson survived the war – and played a key role in a memorable incident in France.

Just days after he took command of the 26th Australian Infantry Battalion (raised at Enoggera), he led its Queensland and Tasmanian soldiers in salvaging the German army’s Mephisto tank, which had been stranded in a shell crater near Villers-Bretonneux.

The famous tank is now on display at the Queensland Museum in the ANZAC Legacy Gallery.

Lieutenant Colonel Robinson survived frontline battle, including being shot in the arm in 1918 shortly before the Armistice.

He returned to Australia and his job at the Queensland Teachers’ Training College in 1919 and devoted his life to education and learning.

His distinguished career would see him become principal of the college in 1935 and hold the role until 1954.

The Robinson Place laneway was named after him, and a sandstone sculpture of him (by Rhyl Hinwood) is affixed to an outside wall of QUT’s Kelvin Grove Library.

The grainy black and white 1914 photo of teachers and students also shows the very first principal of the Queensland Teachers’ Training College – Dr John Shirley, who stands on the left of the back row, in front of the imposing A Block door.

He was another highly-regarded figure in Queensland’s proud teacher training history.

"Given the teachers’ college was founded the year war broke out, he had a challenging start to his job as principal," she said.

"In college reports in 1918 and 1919 [in the 1999 history book A Class of Its Own), Dr Shirley noted how the war and its effect on funding and staffing had led to a reduction in student enrolments and the loss of some of his best staff to the war effort.

"And, like so many families, he suffered great personal loss during World War I, with his son Raymond killed at Gallipoli on April 25, 1915, aged just 22."

The Queensland Teachers’ Training College continued to train teachers throughout World War I and World War II, first at Gardens Point and later at Kelvin Grove.

The QUT Digital Collections is an online archive of history related to QUT, as well as wider Brisbane and beyond.  This historic resource is managed by QUT Library and can be accessed by the public for free.