In-built safety apps that already exist on mobile phones – but most drivers don’t know about or use – could be a key to safer driving and avoiding ‘tech temptation’ and new $1000 fines, according to QUT research. New penalties kicked in at the start of February for Queensland motorists that will see drivers fined $1000 and lose four demerit points if caught handling their phone while behind the wheel.

“The problem is most people don’t know about them or have never tried them,” he said.

Do Not Disturb While Driving is in-built on new iPhones and ‘Android Auto’ is pre-installed on new Android phones, or can be downloaded for Androids operating on older systems.

Both block most phone functions while still allowing incoming hands-free calls, Bluetooth music and voice commands for some tasks.

QUT's eight-week driver behaviour study involved 40 motorists – aged 18 to 56 – who literally test-drove the apps to see if they reduced their phone use, what their experiences were like and what app functions needed to be improved to encourage greater use.

“We found using these apps reduced driver distraction by 25 to 30 per cent – even if drivers only used the app 70 per cent of the time while driving,” Dr Oviedo-Trespalacios said.

“Our message is simple: smart drivers should use these apps if they want to keep themselves and others safe – and avoid a big fine.”

Prior to the experiment, only 18 of the 40 drivers knew that the safety apps existed and only five had ever used them. QUT’s Centre for Accident Research and Road Safety-Queensland (CARRS-Q) asked the drivers to use the apps for eight weeks and record their experiences, including how much they had used their phone.

This was then compared with the confidential answers they provided before the study about their phone use while driving.

While the study found the apps reduced driver distraction, it also found participants thought performance improvements were needed to encourage greater use.

Some people also voiced privacy concerns at allowing the apps to read their messages and access their contacts. 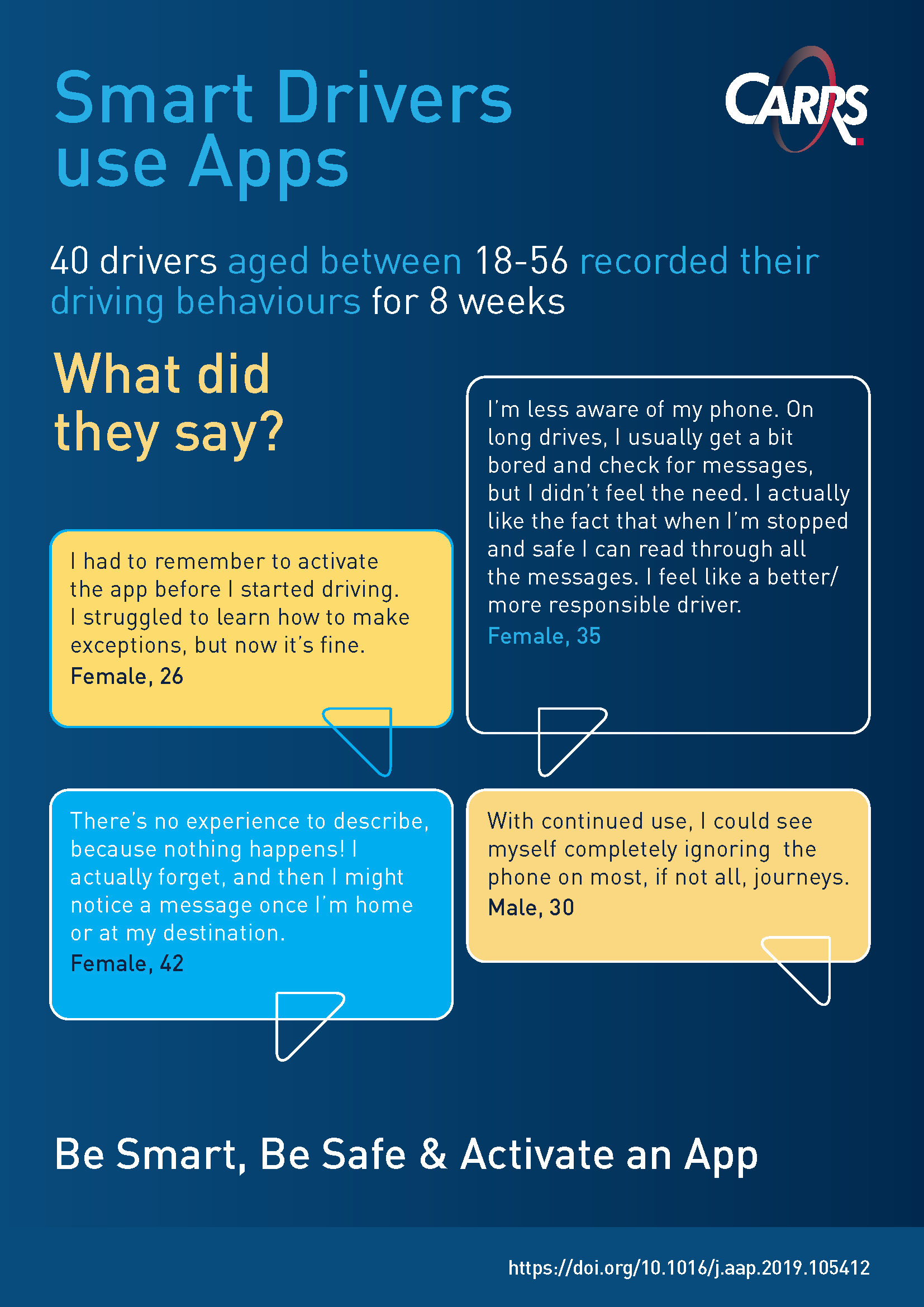 Dr Oviedo-Trespalacios said the apps were an easy and accessible solution for a big problem.

“It sounds simple but it’s really about having a tool to help you avoid temptation,” he said.

“You have to activate them prior to starting your journey and make sure your Bluetooth is on. If possible, you should allow the app to connect automatically with your car every time you drive.

“We found the people who were the least impressed with using the app were those who were frequent users of their mobile phones while driving prior to the study.  These people were the least likely to want to persist in getting used to the app and continuing to use it after the study.

“Overall, we found these apps were a great way for people to avoid the temptation of looking at their phone.  One of the best things they do is not allow notifications to come through – so if you don’t know a text message is there, you’re not tempted to look at it.  Instead they flow in when you reach your destination and turn the app off.

“But, like all apps, they can sometimes fail so it’s important to stay strong and not look at your phone if a notification does slip through.”

Dr Oviedo-Trespalacios said the study had revealed ‘visual-manual’ phone use (looking at and touching a phone) was strongly linked to using music apps.

“This highlights the need for app designers to make sure their apps integrate well with music functions or people will turn them off,” he said.

He said getting used to driving with the app had proved to be a challenge in itself for some drivers, and thus potentially distracting.

“I would recommend people try the app out at home a few times first sitting in the driveway – activate it, turn on Bluetooth, and work out if you will use the app on your phone or through your car’s touch screen if it has one.”