Would you want to live on a floating city to escape rising sea levels driven by climate change?  Or maybe you’d contemplate moving to one as a tax haven or just visiting for a holiday? 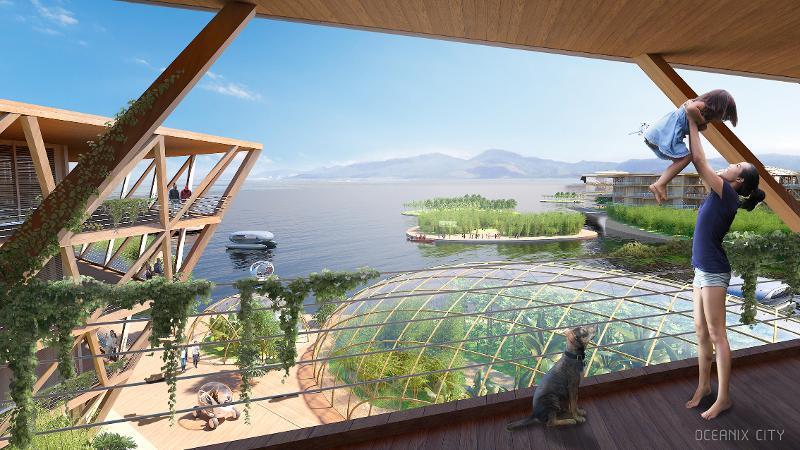 QUT law researcher Brydon Wang says technology is no longer a barrier to creating floating cities in international waters.  Rather, he says they haven’t taken off so far because of political and commercial barriers.

The United Nations has expressed support for more research into floating cities in response to rising sea levels and held its first Round Table on Sustainable Floating Cities in April this year.

The meeting included the unveiling of an amazing concept for Oceanix City – a utopian vision of a sustainable marine metropolis incorporating communal farming and a sharing culture.

Mr Wang is a technology and construction lawyer – and an architect – who is currently researching smart cities at QUT, with his PhD focusing on how much humans can trust machines to administer construction contracts.

He also co-edited the book Large Floating Structures, which looked at floating structures that had already been built around the world, as well as proposals for future ones.

“Apart from the United Nations, few organisations have the economic and political influence or reason to deliver a satellite floating city in the ocean,” Mr Wang said.

“In my view, the future of ocean cities in in technology campuses and in tourism.

“The first opportunity is in floating tech campuses where large technology companies set up floating data centres and campuses in international waters.

“Situated outside national jurisdictions, these campuses could circumvent increasingly onerous privacy regimes or offer innovative technological services without having to negotiate regulatory barriers.

“The second prospect is a return to the seaborne leisure colonies of the past. Companies like Disney could expand on their cruise offerings to build floating theme parks. These resorts could be sited in international waters or hosted by coastal cities.”

In his new article on The Conversation, Mr Wang provides a brief history of floating city proposals, looks at new contenders, and outlines the concept of sovereign floating cities and micro-nations where inhabitants can circumvent tax laws or regulatory restrictions.