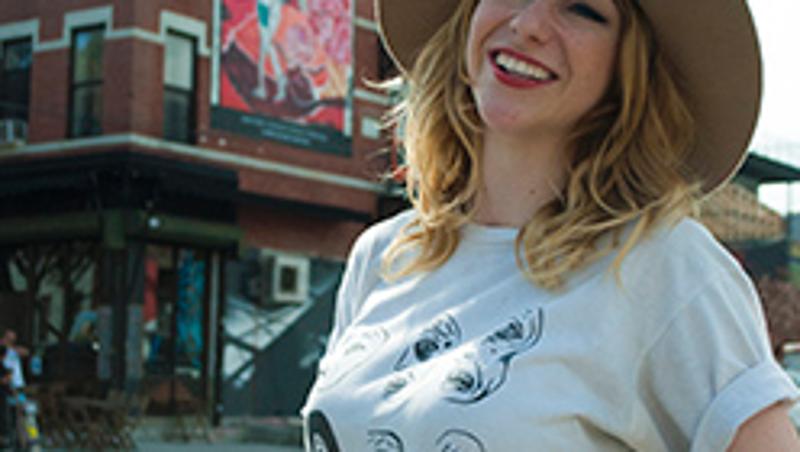 A 21-year-old QUT Interactive and Visual design student with a powerful message on gender equality is one of just 10 female students worldwide to travel to New York as a finalist in the Adobe International and Colossal Media 'World's Biggest Student Art Show'.

Up and coming Brisbane designer, Jessie Hughes, was the only Australian chosen in the global competition with her winning artwork being unveiled this week in a giant, six by four metre-high hand-painted mural, complete with QUT logo, on a building in Brooklyn, New York.

Over the coming weeks the work, which is called 'Being Female' and explores the female form while making connections to the Australian landscape, will be seen by millions of people every day in the city that never sleeps.

With only 11 per cent of creative directors being female, Adobe's initiative was designed to give opportunity to women who have been historically underrepresented in the arts. By creating an all-female, world's biggest student outdoor mural exhibit in the heart of NYC, Adobe aimed to empower and elevate the next generation of female creatives.

"Gender equality is such an urgent issue that is finally, gradually getting the attention it deserves. This competition has allowed the topic of gender equality to once again be raised, this time specifically to the field of the creative industries," said Ms Hughes who one day aspires to be a creative director herself.

"I strongly believe that equality for all is the most important quality for us to foster in society today. My personal artistic style often follows and explores the female form and supports female empowerment. QUT has given me every opportunity to pursue my chosen career and I am pleased to represent the university on the world stage."

Ms Hughes and the other students were flown to New York to see their walls being transformed and meet the team of Colossal painters before their mural was unveiled.

Each work of art was made with the Adobe Creative Cloud suite of mobile and desktop products, and was hand-painted by world-renowned mural and outdoor advertising company, Colossal Media.

According to Adobe International and Colossal Media, the collective of the 10 student's walls will together make it the largest student art show ever based on sheer scale.

"This has been an absolutely amazing opportunity for me and I believe my success really highlights the quality of QUT's School of Design. Not only will my name be visible to the city of New York but so will QUT's. I am ever-grateful to Adobe for this opportunity," Ms Hughes said.

On returning to Brisbane, Ms Hughes is looking to make her break in the Brisbane creative scene. Her portfolio can be viewed at jessiehughes.com.au

"Hopefully the competition will also serve to give more women opportunities in the design sphere."

More information on the competition can be found at https://www.behance.net/gallery/29541073/Colossal-Jessie-Hughes