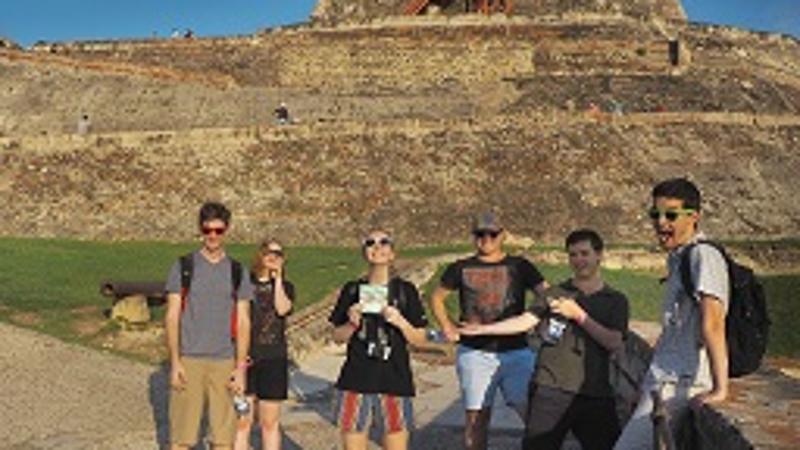 A team of QUT students, including Queensland's 2015 Rhodes Scholar Brody Foy, has worked with students from Bogota's Universidad de Los Andes and Universidad del Norte to keep a Colombian gold mine in the hands of traditional owners and prevent them from getting mercury poisoning.

Project supervisor Dr Richard Medland said The Colombia Project involved students from the QUT's Science and Engineering Faculty and was supported by STIMulate (the QUT maths, science, and IT support for learning program).

"Despite working the mine for 35 years the artisanal gold mining community in Quinchia was under pressure from the government which was seeking to take away their rights to work their traditional land and sell it to foreign mining conglomerates," Dr Medland said.

"The main issue the community faced was their polluting of the local water supply with mercury used in the mining process, as well as the growing need to justify their historic connection with the land.

"Our team included seven QUT undergraduate students from a range of disciplines - a mathematician, engineer, scientist, and four IT specialists.

"Leonardo Parra Agudelo from QUT's School of Design and I were lucky enough to be awarded a QUT mobility grant of $10000 and another $4000 from EECS and ISS ($2000 each), to support our aims.

"Two major projects went ahead over 13-weeks: a water filtration system for use by the community on the ground; and an ambitious real-time 3D mapping of the mine in colour using a purpose built computer in a backpack.

"The water filtration system was built using components sourced locally, including plastic drink bottles, and built by the community with training materials provided. The water filter was able to successfully filter out in-organic and organic mercury, and after two filtrations make previously tainted highly-toxic water drinkable.

"The 3D mapping of the mine was also successful and we are now working with UniAndes to print 3D models of the mine, and to also make it traversable and annotatable in a virtual space. Another positive is that the team built the 3D mapping computer and sensor that go in the backpack when in use, for a fifth of the price of similar systems."

Dr Medland said throughout the project the students also took in a range of culture and undertook extensive visits and workshops at UniAndes and Uni del Norte, sharing their experiences with academics and students alike.

"Projects like these expose our young minds to the wonderful diversity present around the globe. Their research puts them in the driver's seat where they're the ones delivering the resultant tools and services into the hands of communities that struggle with very real problems," Dr Medland said.

"The QUT students have benefited from the process of working with and for a foreign community, while being thoroughly immersed in Latin American culture. It was a unique opportunity for them to be exposed to challenging, and diverse, social situations, and the differences of working within a stable economy versus an emergent one.

"From a technical perspective, it has helped them understand the logistical challenges involved in defining, producing and deploying real-world projects, in real-world environments. It has also shown them the possibilities of how their future work could exist beyond local borders.

"The strong links we forged with Uni del Norte while we were in Colombia will be long-lasting and we plan to work with them to offer scholarships for PhD students to study at QUT in future.

"The project was also successful at integrating both Science and Engineering and Creative Industries, and included support by Dr Jaz Choi from QUT's School of Design."