New fossil timeline database opens for the tree of life 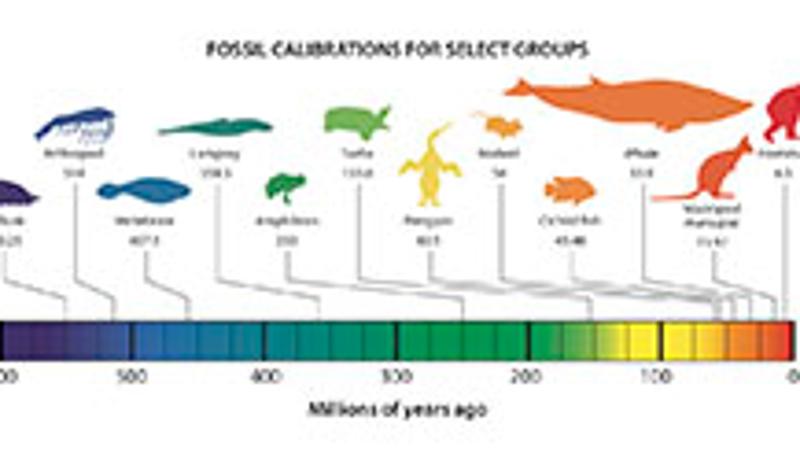 Data on the origins of Australia's unique platypus, echidna and kangaroos have been added to a new open-source database that will help researchers more accurately estimate when all species first arose.

Dr Matthew Phillips, a senior lecturer in evolutionary biology at QUT, is part of a global team of 20 paleontologists, molecular biologists, and computer scientists who launched today the open-access Fossil Calibration Database which synthesises data from the fossil record to enable 'molecular dating' studies.

"Molecular dating uses fossils as calibrations to inform our models of how the rate of DNA evolution varies among species, to estimate the time key groups of plants and animals evolved," said Dr Phillips, who is an expert in molecular dating and mammal evolution.

"It is important for understanding the origin and evolution of biodiversity which has been hindered until now by inconsistent use of fossil record data.

"There has been a lot of disagreement between fossil and DNA researchers on the timing of major events in life's history, but the new database will help them find common ground by providing molecular biologists with carefully vetted fossil data for organisms right across the tree of life."

Dr Phillips said that his molecular dating analyses with new fossil calibrations confirmed that echidnas were descended from ancient platypuses and not a separate much longer line, but it was still poorly known when marsupials first appeared.

"However, it's still a big unknown as to when marsupials arrived in Australia."

Dr Phillips said that by comparing changes between the DNA of species alive today we could work out life's family tree. Then by merging some fossils into this picture to provide a timescale we could use the DNA to date all of the branching points on the tree of life.

"For example, the DNA tell us echidnas are as close to platypuses in evolutionary terms as we are to baboons. But to get the real time for the divergence of these groups we need to calibrate the DNA data with the fossil record."

"As an example, recent molecular dating has suggested that bats appeared 65 million years ago, but there are no bat fossils from this far back. Using these methods to integrate the two types of data, I estimated the origin of modern bats to be 53-58 million years ago, which provides a better fit to the known fossil record."

Dr Phillips said that as palaeontologists continued to contribute to the Fossil Calibration Database, integration of fossil and DNA evidence would provide an increasingly accurate timeline of the evolution of life.