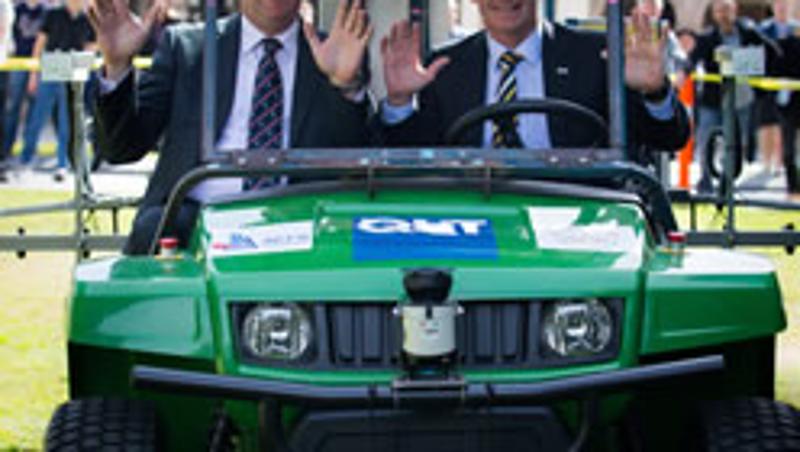 QUT will fast-track research that will see robots planting, weeding, maintaining and harvesting crops thanks to a $3 million State Government injection of funds announced in today's budget.

Head of QUT's Farm Robotics project, Professor Gordon Wyeth, said Australian farming needed to be more globally competitive to be viable in the long term and robots would be a big part of this transformation.

Professor Wyeth said QUT, which had world-class capabilities in robotics R&D, had already developed an 'AgBot' prototype that was being trialled with industry partner Swarm Farm near Emerald.

"This research is needed by the sector and this funding will enable it to be boosted now, when it's needed," he said.

"AgBot is a light-weight, golf buggy-sized robot that has been specifically designed to reduce the environmental impact of weeding.

"It can navigate around a 4000 hectare wheat farm using low-cost sensors, targeting weeds with spray while they are still very young plants.

"Currently farmers have to use their tractors to weed but because fields are naturally wet and boggy after rain it can take some time before the tractor can be brought in.

"This means the weeds are taller and require more spray to be eradicated.

"With AgBot, weeding can happen instantly which means less spray will be used and this is better for the environment and better for the farmer's budget.

"We estimate that robots would save the wheat industry alone $620 million per year just in relation to weeding."

Professor Wyeth said the funding would be used to develop solar-powered farm robots fitted with technology to provide a wealth of information for the farmer.

"Robots will be able to tell farmers how ripe their crop is, for example, and this will be of great assistance during planning of the harvest," he said.

"Because information on the state of all aspects of the crop is being provided to the farmer, they will be able to send their robots to those parts of the farm that need the most attention."

Professor Wyeth said robots would enable farmers to save on labour costs which comprised 40 per cent of production costs in some horticultural sectors.

He also said up to 80 per cent of some horticultural crops could be destroyed by birds and that it would be possible for robotic 'scarecrows' to track and shepherd birds away from crops.

"We can easily envisage that within the next decade robots will play a vital role in the day-to-day operation of farms across Australia.

"With a cost of around $20,000 per AgBot, a farmer on a 4000 hectare wheat farm could realistically have up to 100 robots working their property replacing their tracor and other equipment."