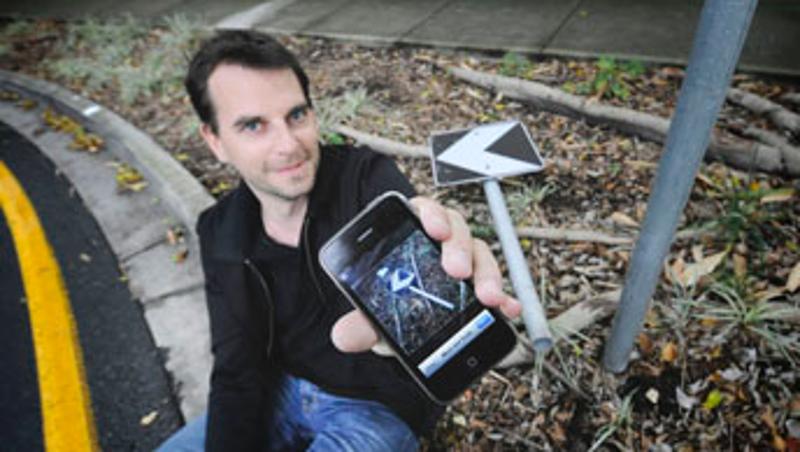 iPhone-using Brisbane dwellers can now point, snap and submit a visual report on the spot to Brisbane City Council about anything that needs fixing, thanks to FixVegas, a free iPhone app developed and released by the QUT Urban Informatics Lab.

Whether it's blocked drains, fallen lamp posts, rubbish, or fresh graffiti, anyone with an iPhone can download FixVegas and send a photo complete with the GPS coordinates to Council's maintenance team, says Ronald Schroeter from Queensland University of Technology's (QUT) Urban Informatics research group.

"FixVegas works in conjunction with Council's long-running Fix-o-gram program," said Mr Schroeter who is a PhD candidate in QUT's Institute for Creative Industries and Innovation.

"iPhones automatically detect the GPS coordinates so people can just take a photo and describe the problem, and send it to Council right there and then.

"FixVegas means there's no need to take the photo and then access your laptop to download it to send or to phone or write to Council. It's the fastest and easiest way to alert them to work that needs doing. It's even easier than sending a conventional fix-o-gram MMS, because the app adds the address automatically."

"Our team is already working on the next version of FixVegas which will allow Brisbane residents not only to lodge maintenance requests, but also to submit other, non-maintenance issues, such as an idea on how to improve the city. We want to encourage place-based civic discussions," Professor Foth said.

"Version 2 will gather people's thoughts and bright ideas about ways to improve or enhance use of an area by combining the mobile phone interface with urban screens that make the discussions on urban planning matters visible to a larger audience.

"People can use their personal mobile device to SMS or tweet their feedback. By displaying it directly on public screens for others to read, residents know they are being heard by their community, and their views might trigger a new idea from someone else.

"It's a way of capturing bright ideas from the residents or users of a city area - right when and where the idea hits them."

The study is funded by an Australian Research Council Linkage grant with support from the Queensland Government, Brisbane City Council, Optus, and 4UTV.