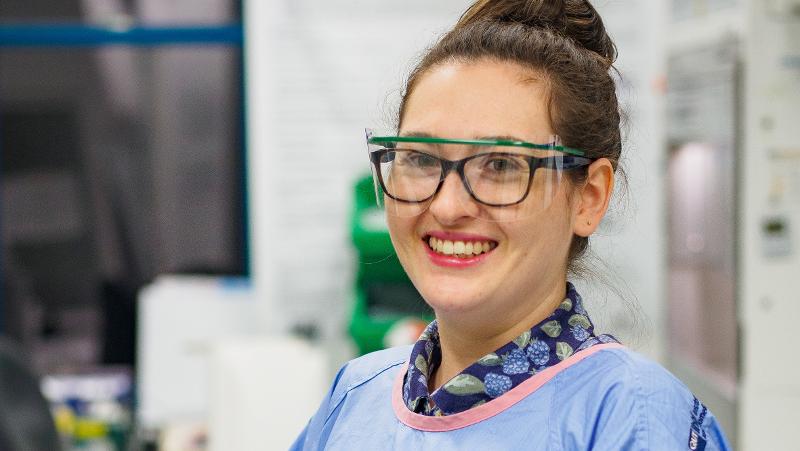 QUT researcher Dr Emily Bryan will walk into pubs in Brisbane and Darwin this week to discuss male reproductive health, in the name of science and breaking down barriers.

She is one of five QUT researchers taking part in the Pint of Science Festival at talks in Brisbane, Cairns and Darwin, to serve up science to thirsty minds and make research more accessible for the public.

Dr Bryan (pictured above) will return to her home town of Darwin on Tuesday to deliver the first half of a mixed night of science – Sex and beer: talking about reproductive health and the science of brewing – at the Darwin Railway Club.

On Wednesday, she’ll be back in Queensland speaking on the same topic at Mars and Venus: discussions on fertility at The Charming Squire at South Brisbane.

Both events are open to the public, with $8 tickets available online.

Dr Bryan researches sexually transmitted infections (STIs), such as Chlamydia, and how they affect male infertility.

After graduating from Darwin High School, she moved to Brisbane to do a Bachelor of Biomedical Science at QUT, followed by an honours year and then completed her PhD on how Chlamydia affects testicular health.

Her current research involves unravelling the effect of STIs on sperm health and male fertility.

“I’m used to talking about my research with other scientists, but Pint of Science will be a very different audience and venue,” she said.

“I’m excited about speaking at both events though, because having these discussions is so important for breaking down the stigma surrounding male infertility.

“The Pint of Science Festival gives scientists a platform for people to join in and experience this small snapshot of our research.  It’s a fantastic way to promote an interest in science and encourage learning and discovery, which everyone deserves to have in their life.”

The QUT researchers taking part in Pint of Science are:

May 9 – Dr Vithya Saahar Sethu Madhavan, From the earth, for the earth: Innovation towards stretchable devices @ Brisbane Brewing Co., Woolloongabba

May 10 – Dr Emily Bryan, Sex and beer: talking about reproductive health and the science of brewing @ Darwin Railway Club

May 11 – Dr Patrick Thomas, Finding hope in the dark diagnosis @ The Paddo, Paddington

Dr Bryan, who is with QUT’s Centre for Immunology and Infection Control and the School of Biomedical Sciences, said she had loved science since being a school student in Darwin.

She moved to Brisbane because QUT had the biomedical science degree that she wanted to do.

Dr Bryan ended up researching Chlamydia after becoming interested in host-pathogen interactions and how bacteria can impact fertility during her honours year.

“I met many incredible people at QUT while doing honours, and Professor Ken Beagley was a real standout as an excellent researcher and group leader … he agreed to take me on as a PhD student and offered me a project on understanding how Chlamydia contributes to male infertility,” she recalled.

“Nearly eight years later, I’m working with an amazing team and we are dedicated to understanding and finding ways to prevent chlamydial infertility.

“Research is intriguing, complex, and sometimes all-consuming, but the potential to help a huge number of people is always there and there’s nothing else I’d rather be doing.”