Mapping the evolution of the universe 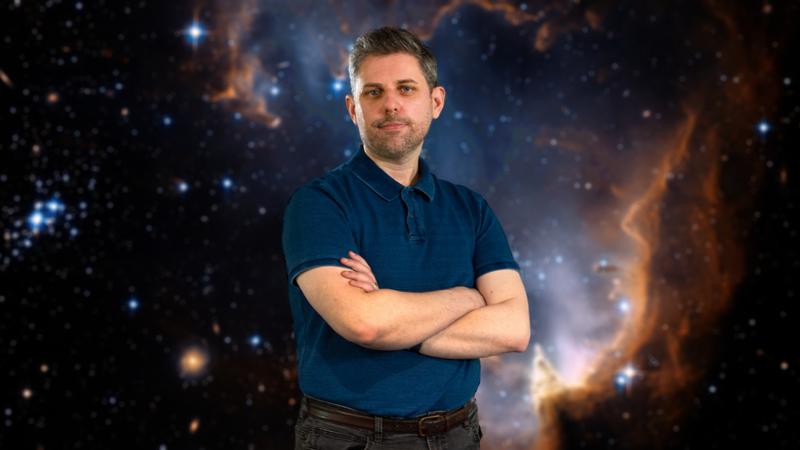 Work has commenced on calculating the distance to astronomical objects from Earth in preparation for mapping the evolution of the universe.

From 2022, about 400 researchers from around the world will use data from the new ASKAP radio telescope, owned and operated by Australia’s national science agency, CSIRO, to conduct the Evolutionary Map of the Universe (EMU) survey.

A key requirement of EMU, being coordinated by astrophysicist Dr Michael Cowley from the QUT School of Chemistry and Physics, is understanding how far away stars, galaxies, and black holes are.

Dr Cowley chairs the redshift working group, which is tasked with determining the distance to these astronomical objects.

He said ASKAP was suited to this large-scale data collection and could detect radio waves emanating from millions to billions of light years from Earth.

“Our universe is expanding, so light from distant objects is stretched as it makes its way to our telescopes.

“Originally in the visible part of the spectrum, distant light is stretched to longer and longer wavelengths out of the optical into infrared and even radio waves – the longest wavelength of light.

“By measuring this redshift - how much an object’s wavelength has stretched - we can approximate its distance from us.

“Certain astronomical processes, such as quasars, also emit radio waves. So, the ASKAP radio data will also provide us new insight into these exotic objects."

Dr Cowley said he and his team will use different techniques, including machine learning, to work out the redshift.

He said the EMU project was the first of its scale and, over the next decade or longer, aimed to observe about 40 million galaxies over the whole Southern sky – millions more than ever before.

“This work contributes importantly to the ability to derive new scientific results from the EMU value-added datasets," Professor Hopkins said.

After completing the redshift analysis, Dr Cowley will join an EMU science group to locate and study supermassive blackholes, like the one in the centre of the Milky Way galaxy.

“The first ever picture of a black hole was unveiled using radio telescopes,” Dr Cowley said.

“Our galaxy’s supermassive black hole is dormant, but it wouldn’t take much to kickstart. I'd like to understand how it could potentially influence our galaxy in the future.

“The EMU survey will allow us to do that, as well as better understand other cosmic mysteries, such as dark energy and dark matter.

“The more that we understand the fundamental nature of the universe, the more we can be a part of it and manipulate it in ways that help us.”

Dr Cowley said there were opportunities for postgraduate students to join the redshift working group and the full EMU science program.

“We now have access to upcoming surveys so there's an opportunity to help mould the direction of the science program, but also get involved in brand new sciences as well,” Dr Cowley said.

The Evolutionary Map of the Universe (EMU) survey will help us understand how the first stars and galaxies formed + more @CSIRO @SKA_Australia @CSIRO_ATNF https://t.co/LWpqDIdUhc pic.twitter.com/2zP3ET0DQa