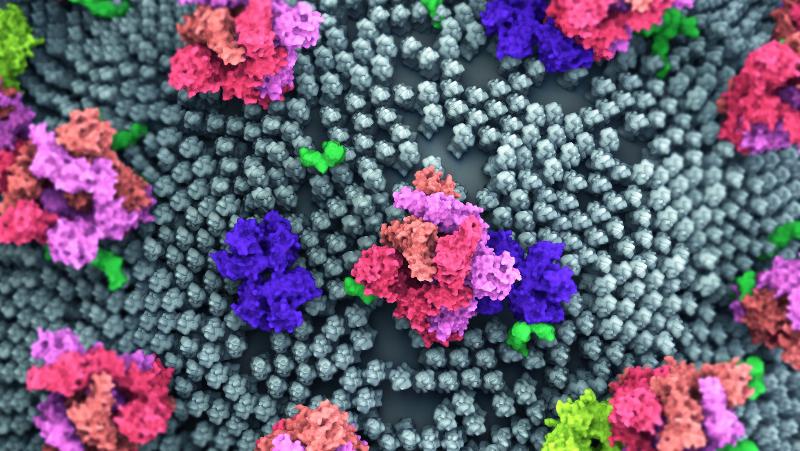 Molecules from the same family as the anti-coagulant drug heparin may interfere with the ability of the COVID-19 virus’s spikes to bind to human cells. This could be used to treat people with severe effects of the virus and any emerging variants.

“Binding of the CoV-2 spike protein to heparan sulphate (HS) on cell surfaces is generally the first step in a cascade of interactions the virus needs to initiate an infection and enter the cell.

“Most research has focused on understanding how HS interacts on the receptor-binding domain (RBD) and furin cleavage site of the SARS-CoV-2 virus’s spike protein, as these typically bind different types of drugs, vaccines and antibodies.

“We have identified a novel binding site on the N-terminal domain (NTD), a different area of the virus’s spike that facilitates the binding of HS. This helps to better understand how the virus infects cells. The NTD is also a part of the spike protein that frequently mutates.

“Some antibodies in the blood that neutralise the viruses bind to the same region of the NTD.

“Therefore, targeting the NTD site with molecules like heparin (or heparin mimetics), a known anti-coagulant drug similar to HS, is a possible strategy to stop the virus binding to cells and infecting them.”

Dr Neha Gandhi, from the QUT Centre for Genomics and Personalised Health, said COVID19 vaccines, although achieving success worldwide, were still far from being widely accessible.

“Epidemiologists believe that persistent low-vaccine coverage in many countries will make it more likely for vaccine-resistant mutations to appear.

“Variants of concern have already emerged in South Africa, the US, India and Brazil. In this regard, alternate antiviral strategies are strongly needed to prevent the spread of COVID-19 and to treat people with COVID-19. “Most SARS-CoV-2 variants have acquired a positively charged mutation in the spike protein. Molecules like heparin and its mimetics are negatively charged and therefore, these molecules could be used to treat people with severe effects of the virus and any emerging variants.

“Our research indicates that molecules that mimic the 3D structure of heparin with different sulphur chemistry, might be potential broad-spectrum antiviral drugs for COVID-19 and other emerging viral threats via direct interaction with the virus itself.”

The multi-national study, “Evidence of a putative glycosaminoglycan binding site on the glycosylated SARS-CoV-2 spike protein N-terminal domain” published in the Computational and Structural Biotechnology Journal, used both computational and experimental techniques to confirm their finding.

The researchers used NCI Gadi and QUT Lyra supercomputers to model how HS and its inhibitors like heparin would interact with the spike protein.

Various researchers from the University of Queensland (Glycochemistry), Curtin University (Immunology), Zucero Pharmaceuticals and QUT conceptualised the study. These computational molecular simulations run by the QUT research team tested and confirmed the hypothesis that heparan sulphate could form a bridge between the newly identified binding site and another site on the spike important in the virus’s infection.

Collaborators from the National Institute for Biological Standards and Control in the UK and the Istituto di Ricerche Chimiche e Biochimiche “G.Ronzoni” in Italy conducted bioinformatics to support the computational studies.

Collaborators at University of Liverpool and Keele University in the UK conducted laboratory experiments which confirmed the hypothesis.