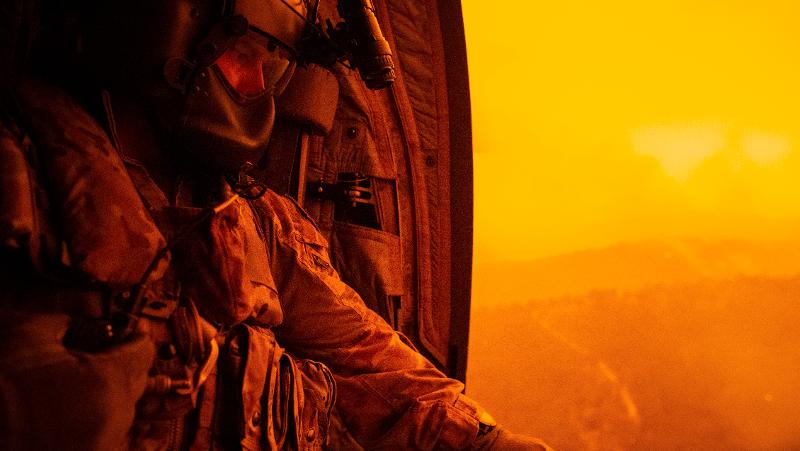 Defence has a budget of $575b over the next decade which includes approximately $270b for capability investment.

QUT and Defence developed a model based on bushfire threat responses that quantified uncertainties in complex engagements, simplified analysis of capability requirements, and provided a methodology on how to communicate risks to decision-makers.

"This project focused mainly on technology system purchases-if weapons are needed for a defence response, analysts can follow this methodology to figure out what to buy," said project leader Professor Jason Ford, a researcher with the Australian Research Council Centre of Excellence for Mathematical and Statistical Frontiers (ACEMS), and the QUT Centre for Robotics. Main image caption: Bushfire and defence systems have a lot in common—threats, defendable assets, team hierarchies and complex interacting networks. QUT developed a simulation model based on bushfire responses to examine how to communicate analysis of such interconnected systems and aid the Australian Defence Force (ADF) with defence planning and asset purchases.
Image © Commonwealth of Australia, Department of Defence.

"Uncertainties like fuel and wind are factors that make fire behaviour difficult to predict and can impact fire-fighting strategies to protect homes and other defendable assets.

"When applied to defence scenarios uncertain factors may include the number of enemies, their location, their manoeuvrability, the type of weapons they have and the capabilities of these weapons."

To develop the bushfire response simulator, Ford worked with senior researcher in simulation design and analysis Dr Troy Bruggemann from the QUT School for Electrical Engineering and Robotics.

"We aimed to answer response team design questions such as what number and combination of truck types we should purchase, and what rules these should operate under," Dr Bruggemann said.

"To model bushfire scenarios, we pretended to be uncertain about bushfire responder capacities such as water-firing range, truck speed and fire behaviours, as a proxy for similar types of uncertainty in a military context.

"After quantifying uncertainties, we ran more than 3000 simulations to measure the impacts on response efforts and developed a model that simplified analysis and predicted the likelihood of mission success.

"Based on simulations, we could predict within 95 per cent confidence the success rate of a threat response-the likelihood of saving a home or other asset from a bushfire, for example, as well as the likelihood that a response unit would survive," Dr Bruggemann said.

The bushfire threat response scenario also helped QUT researchers and Defence analysts develop a methodology for communicating the risk of uncertainties to decision-makers.

Using the new methodology, initial dialogue aimed to define what information personnel needed and how they wanted information communicated to them before moving into data analysis.

"Defence analysts are responsible for generating information for purchase decisions-which collection of assets to buy for a military objective-and presenting meaningful information to people with a range of technical backgrounds and expertise without distorting the outcome," Professor Ford said.

“If someone asked you to spend billions of dollars in three years’ time on a weapons system that needed to survive for 15 years, for example, you would want to spend some time on that—get experts in and as much information as you can—in order to spend the money well.”

The ADF is undergoing a step-change in complexity with the introduction of capabilities like the F-35A aircraft, integrated air and missile defence and others, according to senior Defence scientist Wayne Power.

"These capabilities are characterised by high-dimensionality, complex dynamical interactions and will operate in scenarios with high-levels of uncertainty.

"Understanding uncertainty and complexity and the interdependence between different systems is an important problem for decision-makers.

"We will use the new methodology to help improve the ability of decision-makers to understand the impact of the decisions being made and to make choices that are more robust to highly uncertain futures; whether developing tactics or shaping future capability in 2030 and beyond."

Although not intended as a real bushfire response simulation model, with some modifications, Dr Bruggemann said the model could potentially inform decision-making and policy regarding bushfire response matters such as force design, command and control strategies, sensing, fire-fighting equipment, response unit type and equipage.

"The model represented only what we needed it to represent to simulate a surrogate for Defence projects-it's not supposed to be a very realistic bushfire model, but we could modify it to suit," Dr Bruggemann said.

In 2019–20, the Australian 'Black Summer' bushfire season saw hundreds of fires burn more than 18.6 million hectares. The fires killed 33 people and more than a billion animals and destroyed or damaged thousands of homes and other buildings.

Current software, according to Bruggemann, can inform risk assessments by simulating bushfire spread and quantifying the impact of uncertainties like wind and fuel, but no current system simulates responses.

"Our system simulates bushfire response outcomes, not just the bushfire spread, so this is a unique capability," Bruggemann said.

"Predicting the outcome of emergency response simulation is complicated by the need to perform many computationally intensive simulations that generate large amounts of data-more than 1 TB," Bruggemann said.

"It's further complicated by the lack of knowledge regarding uncertain inputs and outputs-like threat behaviour, the number of threats, natural environment and fire-fighting capability.

"All this information can be crucial for the design of a bushfire response task force, and also tactical operational decisions."

Researchers compared the response simulator with existing bushfire models, and it contained additional features that could potentially be useful in bushfire planning and response.

"We tested it using uncertainties that could be easily quantified using standard computer-based simulation, but further work would consider more sources of uncertainty. It's an avenue we're investigating but that would be the subject of future projects," Bruggemann said.

Bushfires and defence have a lot in common

Researchers found adding more response units to a bushfire reduced the likelihood that all of them would survive.

"We considered the dynamic interactions between a firefighting team, support assets and a bushfire threat to simulate and analyse different operational, tactical and strategic management decisions," Bruggemann said.

"The likelihood of all response units surviving actually decreases at a certain point when there are too many involved, or if units are too close to the threat.

"On the flip side, units can also be too far away from the bushfire to maximise the impact of available water," Bruggemann said.

Researchers also modelled the likelihood of success depending on when and where responses started.

"By using cells to simulate distance we could determine if a bushfire response would successfully defend an asset based on the response unit's sensing, water range capability or strategy," Bruggemann said.

"Among other factors, success not only depends on where firefighting starts in relation to the asset but when the response started.

"This information would help in planning any response but may be especially useful when there are multiple threats in the same location."

Current Defence processes focus primarily on the information analysis, but a new methodology resulting from the simulation process also focuses on how people communicate uncertain information with each other, according to Ford.

"We investigated what sets of vehicles might do, the strategies used to fight the fire, as well as the impact on the outcome. And we measured things like the probability that the assets and vehicles would survive," Ford said.

"This project was about how to honestly communicate uncertainty to a decision-maker so that they know it exists and they don't assume the information is perfect. They might make a hedge decision if they know that information is uncertain.

"If there were two similar options-one with slightly better numbers but high uncertainty versus a certain option with slightly lower numbers-at least by giving that information to a decision-maker, they are able to take it into account."

Ford said this year's pandemic had seen decision-making like this rollout at a national level.

"Completely different decisions were made around the world, perhaps for a range of reasons and with different outcomes.

"It's an interesting example of how people have to make important decisions in the face of not having all the information, and how analysts might better present information to aid decision-making."