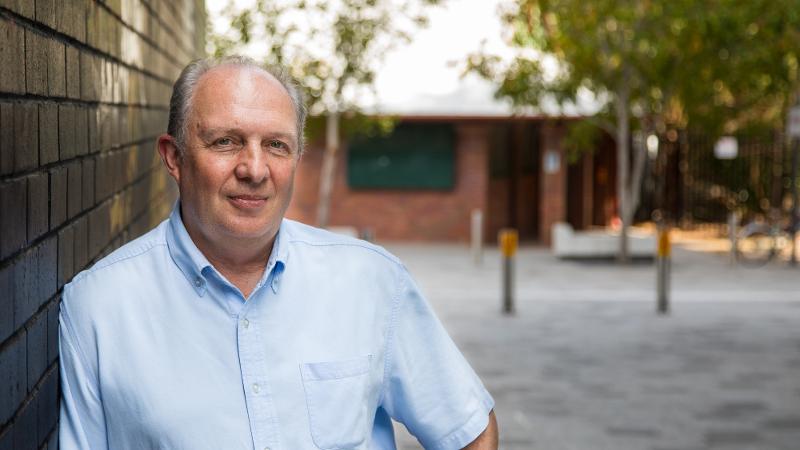 In a step towards the goal of shrinking electronic devices to the molecular scale, an international team of researchers has developed a stable silver wire that is just one atom wide.

For the past two decades, researchers wanting to develop nanodevices have rarely been successful in creating long atomic wires assembling into a coherently oriented array, in addition, such wires have been unstable in anything outside of a vacuum.

In this project, as QUT’s Professor Dmitri Golberg explains, the researchers found they had surprising success when they did not try to create a wire, atom by atom, within a vacuum.

The researchers put nanoparticles of silver onto the outside of tiny nanorods that have channels inside. “When we do this in a vacuum, or in some inert atmosphere as people usually do, nothing happens,” Professor Golberg said.

“But we did it in air. The atoms from silver particles diffused very fast and they diffused inside the channels.”

The expected result, Professor Golberg said, on an experiment like this would be that the silver would react with the oxygen in the air and form silver oxide.

“Instead, the atoms go inside the channels to accommodate themselves and make these small strings.

“It wasn’t intentional, it wasn’t planned to make wires,” he said.

Professor Golberg said the process was like water drops going through a sieve, and the result was that wires, as thin as just one atom, formed inside the channels in a self-organization process, with up to 200 strings in each channel.

The researchers then attached the nanowires to electrodes and ran a current through the wire, expecting it to behave like a metal in that current should increase as voltage was increased.

“But at some temperature, the material became an insulator. This is not common for silver and is called metal insulator transition,” Professor Golberg said.

“This is quite an interesting transition in physics.

“And this is a major point, because it means the silver wire could be used as a thermal switch. Depending on the temperature, you change the properties of the material by changing the temperature.”

In the work towards building nanodevices, the wire is considered quite long – although to put it in perspective the wire is as long as about one fiftieth of the width of a human hair.

“It’s still pretty small but for me it’s quite long. In the electron microscope, it’s very big.”

Professor Golberg is a material scientist and physicist with more than 30 years of hands-on experience in working with nanomaterials.

His primary area of research is to find the champion materials in each category of the green energy technologies - thermoconducting, thermoelectric, structural, battery and solar materials - under deep analysis of all possible candidates put into real-life harsh environments, from vacuum conditions similar to space and from very high temperatures of 2000 Celcius down to -195 Celcius, modelled inside the electron microscope.

“With an electron microscope one can clearly see things happen to individual atoms, which is the unique possibility that still fascinates and excites me,” Professor Golberg said.

“For example, when looking at materials for ultra-efficient electrodes of the future, I can see, and even video record, how ions insert themselves into materials.