The beauty of real-world experience 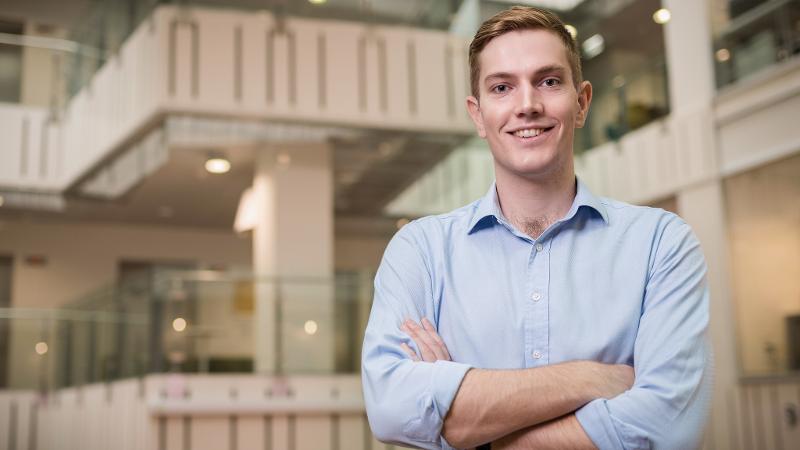 Lashes and brows and a $700 billion industry have taken QUT business graduate Angus Mitchell from Brisbane to Melbourne to Tokyo and back.

Angus has worked for L’Oréal for the past four years in Australia and Japan and has progressed up the ranks to become their Australian brand manager for Maybelline – the world’s number one cosmetics brand.

The beauty industry is big business, with around $700 billion spent globally by consumers last year.

Angus’s work at L’Oréal has included successfully launching new mascaras in Australia and plumping up the company’s brow business in Japan.

He credits the real-world learning of his QUT degree – including opportunities to do internships and compete in international competitions – for getting his foot in the industry door.

Angus graduated from QUT in 2016 with a business degree majoring in public relations and joined L'Oréal's marketing graduate program in January 2017.

For a new graduate, his credentials were impeccable.

Along with a University Medal (awarded to the year’s top graduate), a 6.5 course GPA, and Dean’s Honours Scholarship, he had represented QUT in international business case competitions and completed three internships.

“Case competitions involve going head-to-head against some of the world’s best business schools, such as Wharton and Berkley, to crack a business case that involves complex challenges and opportunities for a real company,” he said.

“As a member of the QUT International Case Competition team, I travelled to Malaysia, Singapore and Canada to compete in competitions. A highlight was winning the world’s largest competition for the expansion and brand awareness strategy we pitched for a Canadian hotel.”

“It meant I could constantly be searching for a potential area of research throughout my undergraduate degree and led to my honours thesis on digital influencers and sponsored social media posts,” he said.

“The scholarship funds I received also allowed me to complete a semester exchange abroad at the University of Leeds in England and be part of a study tour to Hong Kong.”

The Hong Kong trip in 2015 involved 10 QUT students and was the School of Advertising, Marketing and Public Relations’ first study tour.  It included visits to top agencies to gain insight into Hong Kong’s public relations and advertising industry.

Angus also completed three internships while at uni, with the Nine Network, Suncorp and a Brisbane PR agency.

“In terms of real-world experience, my lecturers and tutors were often working in industry, which provided amazing insights into how university work can translate to the real world and meant I graduated with a network of connections,” he said.

“I was lucky enough to secure my first internship at Suncorp through one of my tutors, which is not uncommon at QUT.

“I also made valuable business connections through AMPed, which is QUT’s student society for advertising, marketing, public relations and international business students.”

After graduation, Angus’s real-world experience at home and abroad helped land him his first position with the L’Oréal Group’s Australian headquarters in Melbourne – a management trainee in marketing.

“I then relocated to Japan for seven months where I led the strategic direction and product development for Maybelline’s brow business in Asia, focusing on our 2020 launch plan,” he said.

With that valuable international experience under his belt, he then returned to Melbourne last year and was promoted to his current role as brand manager for Maybelline.