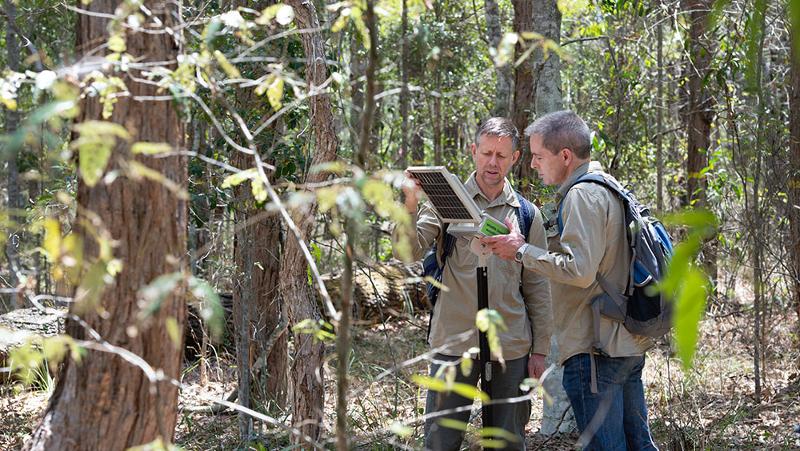 You won’t see stars at the Australian Acoustic Observatory but you will “see” a galaxy of sounds from around Australia.

Wild and remote areas around Australia are part of the Australian Acoustic Observatory, the world’s first ‘Google maps for sound’ – hundreds of solar-powered sensors that continuously record the sounds of wildlife for five years.

“All told, 400 listening stations will be placed at 100 sites in seven distinct ecoregions across Australia and will record a massive two petabytes of data equal to 2000 years of sound, over the five-year period,” Professor Paul Roe, from QUT’s Ecoacoustics Research Group, said.

“The observatory aims to record, monitor and map Australia’s biodiversity over time.

“The sensors will capture every frog croak, bird call, animal noise, and weather event to create a soundscape for each ecoregion.

“This sound data will be stored in the cloud and made freely available to researchers, citizen scientists, artists and the general public. “We can analyse recorded sound in three different ways:

“Our sound map will allow users to zoom in on an area at a particular year, month or day and, in a few seconds, listen to the sounds of that particular moment in time.

“We are expecting these soundscapes will be used and reused in many creative ways.

“Many areas of Australia are remote and visited by perhaps one ecological expedition for a few days each year.

“These expeditions are now deploying acoustic sensors and will collect and replace sensors’ memory cards each year.

“This will allow us to hear what is happening in remote areas when, for example, rain makes the area inaccessible but interesting ecological events such as desert frogs emerging from the ground are occurring. “The Acoustic Observatory will reveal these events and show us what is happening to the environment; how the environment is changing in response to climate change, land use change and the arrival of feral species.”

Professor Roe said the Australian Acoustic Observatory was funded by a $1.8million ARC Linkage grant and was a collaboration with QUT, James Cook University, University of Queensland, the University of New England and Charles Sturt University.