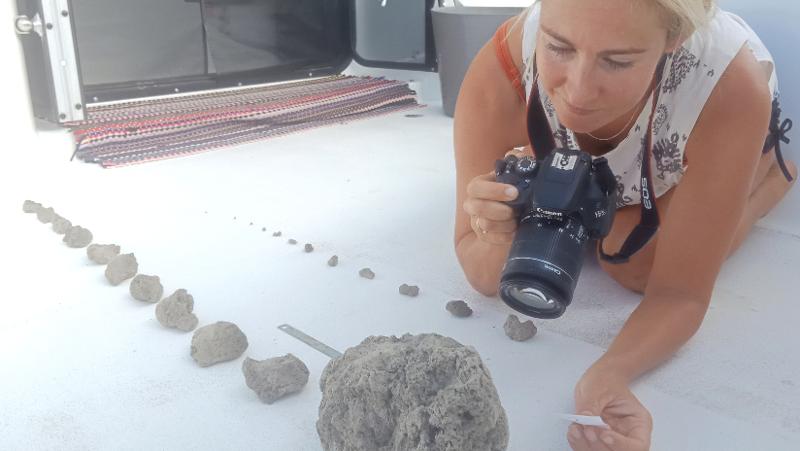 The Great Barrier Reef is set to receive a restocking of new coral from a pumice raft, the size of more than 20,000 football fields, now on its way to Australia following an underwater volcanic eruption near Tonga.

QUT geologist Associate Professor Scott Bryan will be studying samples of the pumice recovered by passing sailors shortly after the eruption. He will continue to study the impact as the pumice raft, which is already more than 150sq km, hits Australian shores in about seven or eight months time, bringing with it billions of marine organisms who attach themselves along the way.

Professor Bryan has been following the pumice raft’s voyage since the eruption with the help of QUT spatial scientist Dr Andrew Fletcher.

“This is some of the newest rock on our planet, only being a few days old. The pumice is from an eruption that no one really witnessed,

“This is a potential mechanism for restocking the Great Barrier Reef.

“Based on past pumice raft events we have studied over the last 20 years, it’s going to bring new healthy corals and other reef dwellers to the Great Barrier Reef,” Professor Bryan said. Although it won’t solve all the problems the Great Barrier Reef is facing, having more corals on hand to help speed recovery will be a benefit.

The pumice comes from an unnamed but only recently discovered underwater volcano that satellite images reveal erupted probably on August 7. This volcano last erupted in 2001.

Pumice forms when frothy molten rock cools rapidly and forms a lightweight bubble-rich rock that can float in water.

The first report of the pumice came when Australian couple Michael Hoult and Larissa Brill from SailSurfROAM, sailing their catamaran to Fiji, encountered the volcanic rock floating on the ocean’s surface.

“We entered a total rock rubble slick made up of pumice stones from marble to basketball size,” the couple said in their Facebook post detailing the encounter.

“The waves were knocked back to almost calm and the boat was slowed to 1 knot. The rubble slick went as far as we could see in the moonlight and with our spotlight.”

The Australian sailors reported the hazard of the rocks and have since been working with Professor Bryan in providing samples and details of their encounter. Professor Bryan, who has been studying similar eruptions like this for 20 years, said this sort of occurrence happens about every five years in our region but the timing of this eruption is good news for the Great Barrier Reef.

“At the moment the pumice will be bare and barren but over the next few weeks it’s going to start getting organisms attached to it,” Professor Bryan said.

“Then they’re going to grow and diversify, to ultimately wash up here in Australia.”

Professor Bryan said the pumice raft would pass New Caledonia, Vanuatu and possibly some coral reef areas in the eastern Coral Sea around the time of the main coral spawning late this year.

“It’s the right timing. So it will be able to pick up corals and other reef building organisms, and then bring them into the Great Barrier Reef,” Professor Bryan said.

“Each piece of pumice is a rafting vehicle. It’s a home and a vehicle for marine organisms to attach and hitch a ride across the deep ocean to get to Australia.”

Professor Bryan published world-first research in 2004 of a previous eruption from the same volcano. The research shows how pumice waves from the south-west Pacific could not only be something that helps the Great Barrier Reef but also possibly be how the reef was formed in the first place.

As the pumice raft comes closer to Australia, Professor Bryan said one of the interesting things to study would be the composition and character of the pumice and compare that to the pumice produced in the 2001 eruption.