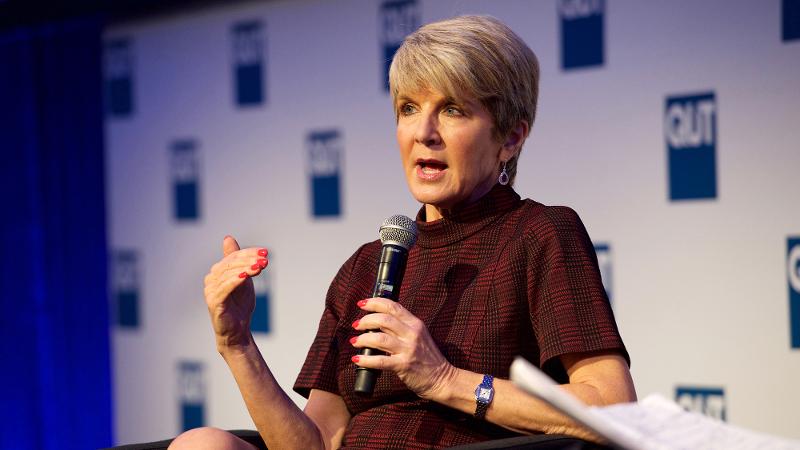 Former Minister for Foreign Affairs Julie Bishop, speaking at the QUT Business Leaders’ Forum today, highlighted the need for more women in leadership roles and explained the key differences between President Trump and Obama in terms of leadership styles.

Ms Bishop, whose political career included serving as the deputy leader of the Liberal Party, told the QUT function of how she had switched from a 20-year career in law to a career in politics after attending a lecture at the Harvard Business School when she had a “life-changing moment.”

Ms Bishop said she had attended a lecture at Harvard on the topic “Australia – lucky or broke?”. At the end of the talk, the lecturer asked the audience of business leaders who would give up their climb up the corporate ladder to serve in public office.

“I put my hand up and the Australians in the room fell about laughing,” she said.

QUT Business School Executive Dean Professor Robina Xavier, speaking at the forum, introduced the QUT Pathways to Politics for Women, a new program in Queensland to help redress the significant under-representation of women in political life in Australia.

Ms Bishop said she had been raised to believe public service was “a contribution worth making”.

“The funny thing about parliament is that you don’t need any qualifications,” Ms Bishop said.

“There is no training, there is no course. Thank you QUT for introducing one.”

Ms Bishop said there was “gender deafness” during her time in Cabinet, when often her ideas were ignored but the ideas were welcomed later when introduced by a male colleague.

“Without doubt, the culture in the Australian parliament is still very male-oriented,” Ms Bishop said.

She said female leadership was much more transformational, with women being more concerned about the needs of individual team members.

“Women are far more collaborative and men are much more adversarial, much more competitive.

“In the decision-making forums, the Australian Cabinet, the United Nations, forums around the world, and business boardrooms, you need that diversity of styles of views and experiences.

“We need more women in those decision-making forums.”

Ms Bishop said she had developed a test she applied to decision making:

Ms Bishop said a good mentor was “one of the most valuable assets in your life” and she made mention of three United States Secretaries of State that had made a particular impression on her: Condoleeza Rice, Madeleine Albright and Hillary Clinton.

She said her favourite piece of advice came from Ms Albright: “There is a special place in hell reserved for women who don’t help other women.”

Ms Bishop said her political career had enabled her to observe many different styles of leadership.

“The most extraordinary contrast in leadership styles that I’ve witnessed over the past decade is that between President Obama and President Trump,” she said.

“President Obama is a very elegant speaker. I found him to be extremely consultative, he would look for alternative views. He sought out differences of opinion.

“President Trump could not be more different. President Trump famously relies on his gut instinct in making decisions. He has built a persona around being unorthodox and unpredictable and confounding his critics, including the mainstream media.”

Ms Bishop said President Trump had made “shooting from the hip with his midnight Twitter feed” into an art form.