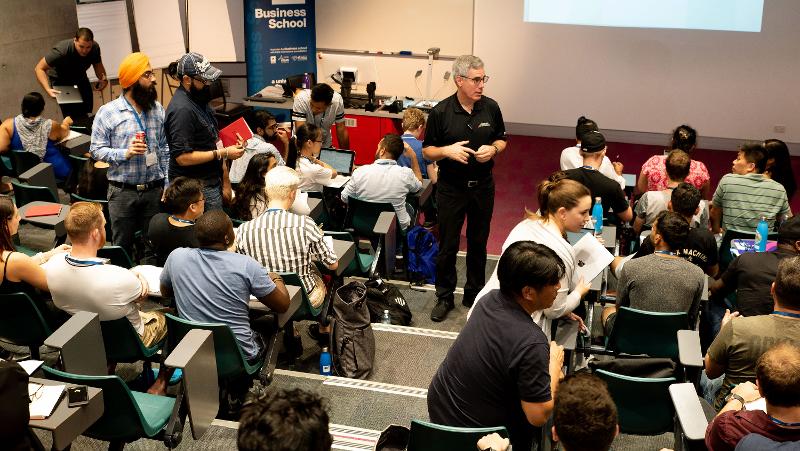 The internationally renowned MIT Innovation and Entrepreneurship Bootcamp at QUT has given more than 90 entrepreneurs from around the world the skills to take their innovative ideas to the next level.

The “bootcamp for brains” was held at Gardens Point campus in February in partnership with the Queensland’s Government Advance Queensland initiative.

The bootcamp saw the innovators from 30 different countries team up with each other to identify a problem and build a start-up business to solve it.

The winning idea for Bootcamp 2019 was a smart wearable device designed to keep travellers safe.

Margarita Camus, from Chile, was the leader of the winning team made up of Bootcamp participants from South Korea, America, Romania and Japan.

“Our project was called Travel Angel and we created a smart safety device bracelet for women traveling to developing countries who are volunteering,” Ms Camus said.

For the entrepreneurs who have travelled to Brisbane for the MIT Bootcamp at QUT, the appeal of the intensive one-week experience is about learning the skills that will arm them to achieve success.

But Ms Camus said the winning team also had the motivation to take their startup pitch and turn it into a real-world product.

“We want to take Travel Angel and make it a reality,” Ms Camus said.

“We’re going to talk to investors, go to these remote countries, really understand the problem that we’re going to solve and then bring Travel Angels to these women so they can feel safe.”

The QUT Business School Award went to a team made up of Bootcamp participants from Brisbane, Sydney, Melbourne and Tasmania who pitched the idea for a product called Legacy.me.

Team leader Phing Lee said Legacy.me was  a solution to the problem that half of Australians did not have a will.

“People don’t want to get a will,” Mr Lee said.

“And why is that? They don’t want to think of themselves dying.”

Mr Lee said the idea for Legacy.me was to flip the conversation from focussing on dying and mortality to the legacy they would leave behind.

“Collectively though all of us on the team when we set out on our journey said we were here to learn. Winning is that validation of the learning.”

A third team received an honourable mention for Miki, a “zero to ready” beauty augmented reality app, powered by artificial intelligence and designed to guide women on how to apply their makeup depending on the occasion.

MIT Bootcamp Director Erdin Beshimov said it was the third year in a row MIT had chosen to host the event at QUT.

“QUT is on the frontier of innovation and how you change the innovation ecosystem in the region,” Mr Beshimov said.

“We love working with QUT as it’s a fantastic campus and the staff are great collaborators where we learn from each other.”

He said this year’s participants realised over the course of the week that they were capable of more than they previously thought.

“It’s essential to be taught entrepreneurial skills so those skills can be applied to a range of different situations that can be transferred across people’s working lives,” she said.

“Our role is to help students shape their ideas, simplify them to be of value to a customer, because successful entrepreneurs are those who have customers.

“It’s a way of pursuing a passion, or solving a problem that creates value for an industry.”