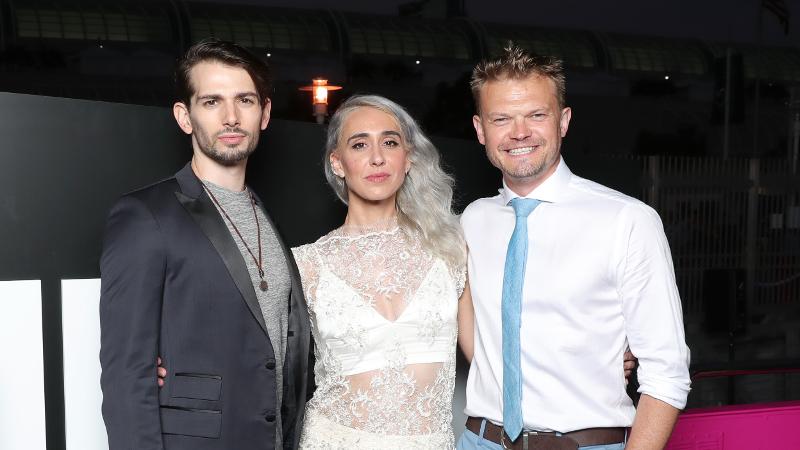 Earlier this year QUT Creative Industries alumni Madeleine Kennedy and Marcus Vanco made Australian history as they launched the first ever independent, sci-fi fantasy television series We Were Tomorrow at the world’s largest Comic-Con convention in San Diego.

We Were Tomorrow follows twin siblings as they navigate through three lifetimes to escape a dying world and an immortal hunter, played by fellow QUT graduate Gyton Grantley.

Madeleine said the launch was an empowering and humbling experience as she shared her story with people who are passionate about science fiction and fantasy content.

“In the hours leading up to our rooftop launch, the WWT cast and Comic-Con Radio hit the San Diego Gaslamp Quarter to meet with fans, talk about the series and award launch tickets to the best dressed Cosplayers.”

Marcus said his highlight were the feelings of pride, excitement and nerves from the cast as they stood on stage and presented the First Look trailer to the crowd.

“The tidal wave of praise we received straight after was immeasurable. People just kept asking ‘you did this independently?’” Madeleine said the series has been a wild ride.

“We Were Tomorrow began as a feature film, was reformatted for television and has been responsible for some of my greatest victories and presented some of the hardest, rock bottom challenges I’ve ever faced.”

Marcus shares this sentiment, stating his work with Madeleine in co-producing a project had been one of the most rewarding experiences of his life.

“It’s definitely not without its challenges, and some days seem like the end of the world, but the trade-off is rich with industry perspective, knowledge and a deep sense of pride in what we’ve accomplished together.”

For both QUT graduates, their love of acting started at a young age.

“My ambition to be a performer and creator has been unwavering ever since I was little,” Madeleine said.

“As cliché as it sounds, I have never wanted to be anything else.”

While at school, Marcus said he “only cared for one subject – Drama.”

Madeleine said she wanted to be surrounded by like-minded creatives who had the tenacity, ambition and skills to create work for themselves. “I realised that if I wanted to be a voice to the stories I thought needed to be told, I would have to create them. So in late 2011, I fused my love for acting with writing and producing, and began my production company Mad Lane Productions.”

“As a young, female filmmaker, I am so proud to have led my team into unknown territory with this project, as we now stand at the forefront of a new wave of Australian artists eager to create high concept stories with humble budgets and innovation.”

When asked what advice they’d give current students, Marcus highlights the importance of staying open minded.

“As much as any university tries to prepare you, there’s nothing quite like making a career for yourself in the real world. So be prepared to sometimes let go of everything you’ve learned and what you think you know.”

Madeleine emphasised the importance of never forgetting ‘you are enough’.

“Your self-value is crucial to embracing and evolving as a student, in art and as a human.”