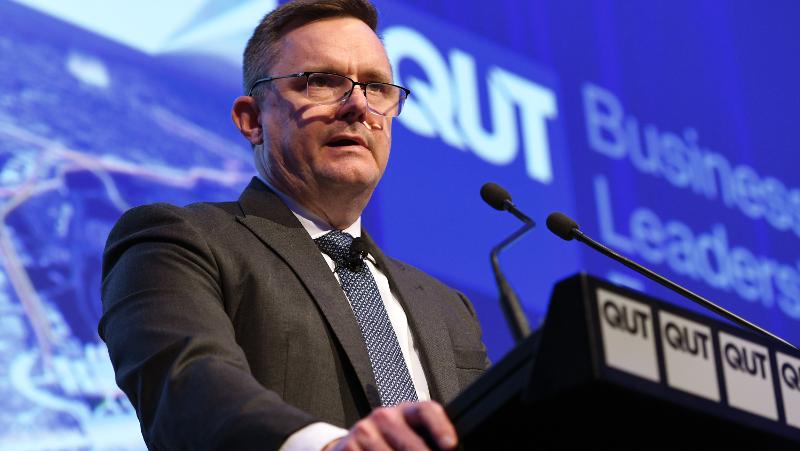 At today’s QUT Business Leaders Forum Mr Johnston, a QUT alumnus, said purpose was replacing the bottom line as the most important consideration for businesses.

“Put purpose at the top, people number two, delivering to customers number three: if you do that all well you will deliver value for shareholders,” he said.

“The value we as a private company create can be measured in profits, dividends and valuations. But it can also be measured in lives restored, communities supported, and futures built and assured.”

He said understanding his business’s purpose meant leaders were obliged to take a stance on social issues.

“Our people are asking us to be involved, to have a position, to drive change or face a backlash,” he said.

He said Australia’s devastating Black Summer bushfires of 2019–2020 caught the world’s attention and highlighted the enormous physical and mental toll of climate change on communities.

He said he saw first-hand the impact the fires had on people’s lives and said governments needed to overhaul planning and development laws to protect Australians from the risk of climate change.

“We have put too many Australians in harm’s way simply through complacency and we have to do better at that and assess some of the mistakes that have been made in the past,” Mr Johnston said.

He said the insurance industry was trying unsuccessfully to encourage government to invest in mitigation measures to ensure people were protected from the effects of climate change such as devastating bushfires and floods.

“On every dollar that is spent on disaster funding, 97 cents go into cleaning up after an event and only three cents go into mitigation, resilience and adaptation: that cannot be the right ratio going forward if we’re to work through the complexity and the challenges associated with climate change.”

Mr Johnston outlined a four-point plan that governments needed to adopt to counter the effects of climate change on communities.

The first was investing in mitigation infrastructure such as levee banks to protect townships from floods.

“We stopped writing insurance in Roma until they put in a $10 million levee bank because we’d spent $180 million in the three years previous. They put a levee bank in, they haven’t had a flood since and insurance premiums have gone down by half.”

The second point in his plan was to improve private resilience by creating subsidies for people to adapt their homes to withstand natural disasters.

“You can get a subsidy to put a solar panel on your roof but not a subsidy to batten the roof down [to protect houses from cyclones],” he said.

Thirdly, he said planning and environment development laws needed to be changed to stop people building in areas prone to natural disasters.

Finally, he said state and federal governments had to cooperate on tax reform to allow the most vulnerable people to access insurance products to protect against natural disasters.

“Forty-five percent of an insurance premium goes in taxes and charges. We put the GST on top of the premium; we put the stamp duty on top of the GST and in some states we put a levee on top.”

Mr Johnston said it was a mistake to think that climate change was simply something we had to act on to protect future generations.

“I meet so many people today who have been put into harm’s way by previous generations and we cannot forget these people, and that’s why I argue so strongly for resilience and mitigation.”