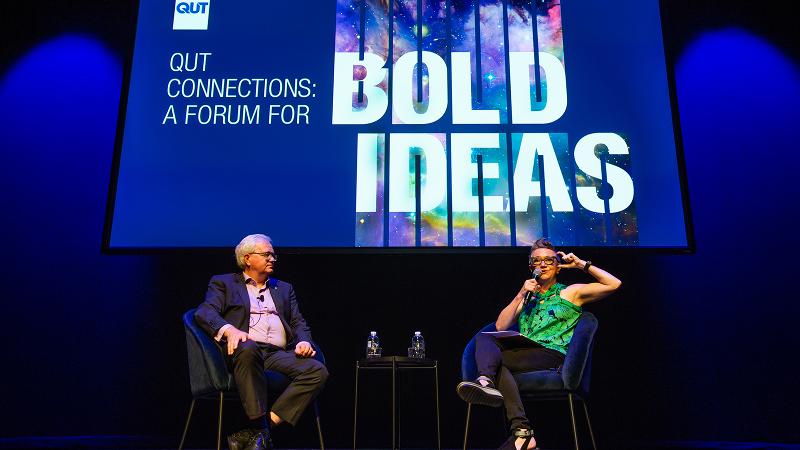 Professor Schmidt told a packed audience at the inaugural QUT event, Connections: a forum for bold ideas, last night that space research contributed to international relations, and to many technologies we take for granted today.

“Understanding the universe is wonderful and we should do it because we’re humans. We also work very well when we collaborate on things like astronomy together and we’re very good at uniting the world,” he said.

Professor Schmidt said a research project by an Australian radio astronomer 60 years ago had laid the foundation for Western partnerships with China.

“He was literally the first Westerner to go to China, and he started working on something like radio astronomy that no one thought was a threat to anyone, and catalysed a relationship that ultimately opened up China.” Professor Schmidt said that in the process of conducting their research, space researchers created technologies that were adopted by wider society.

“The camera on your phone was invented for a mission to Jupiter; the World Wide Web was invented as part of the efforts at CERN [the European Organization for Nuclear Research, a research centre that operates the largest particle physics laboratory in the world], as was the touch screen. GPS is based on general relativity and going through and understanding the details of that physics. Wifi [was] invented here in Australia [for] radio astronomy.”

The forum was hosted by QUT alum and award-winning ABC science journalist Bernie Hobbs, best known as a judge from The New Inventors. QUT researchers Associate Professor David Flannery, Associate Professor Thierry Peynot, Dr Selen Turkay and Dr Michael Cowley were available to talk to attendees before and after the event.

Professor Schmidt makes a significant contribution to public debate through the media, and through his membership of bodies including the Prime Minister's National Science and Technology Council. He is a Fellow of the Australian Academy of Science, the United States National Academy of Sciences, and the Royal Society, and was made a Companion of the Order of Australia in 2013. Professor Schmidt has been Vice-Chancellor at the Australian National University since 2016.