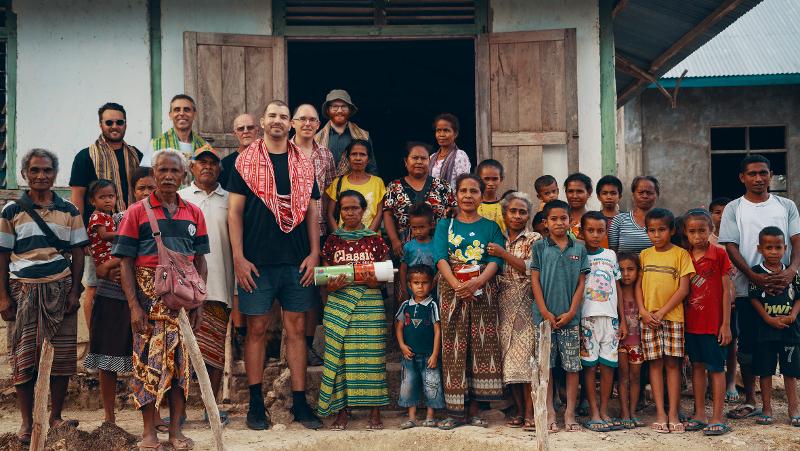 A QUT PhD student who co-founded a social enterprise that uses old laptop batteries and solar panels to bring renewable energy to off-grid communities in Indonesia has been named Queensland’s Young Planner of the Year for 2021.

Nick Kamols is a town planner who worked in local government and private practice before returning to university in 2019 to study a Master of Philosophy in urban informatics at QUT.

This year he embarked on his PhD with the QUT Design Lab, where he is investigating long-term planning frameworks to further integrate regenerative design and circular economy principals into the built environment.

An estimated 800 million people around the world lack access to electricity, including about 27 million people in Indonesia – 10 per cent of the country’s population.

“We use electronic waste and solar panels to provide a basic, reliable power source to people living in remote communities,” Mr Kamols said.

“We have built about 300 ‘PowerWells’ and shipped them to Indonesia – most of them this year.

“We build them by repurposing lithium-ion batteries from old laptops, with enclosures made of perspex from old monitors and TVs, and hook them up to solar panels.  The systems have four lights, four USB ports and a 12-volt output that can be used for laptops and other essentials.

“Originally we thought their most popular use would be powering devices, but it’s the lights that have made the biggest impact in many of the homes that now have them.

“People were using kerosene lamps, which are terrible for indoor air quality. The PowerWells are brighter for night work – like children studying and people working with textiles – and they don’t pose the health risk.”

The idea for PowerWells was sparked when Mr Kamols and Mr Clair attended a start-up weekend at Substation 33, an e-waste recycling facility near Brisbane, and listened to a participant talk about living in a remote part of Indonesia and having to travel to the next village just to charge his phone.

The story and the setting combined to inspire Mr Kamols and Mr Clair, who had never met before, to build upon work that Substation33 had been doing with batteries and design a small-scale solar power system from electronic waste.

“Within 14 days of that start-up weekend, we had flown to Indonesia, made one locally, and installed it in a remote community,” Mr Kamols said.

“We’ve now partnered with NGOs to get the PowerWells into people’s homes.

“They pay off the system in small monthly payments – either in cash or by non-monetary payments such as harvesting bamboo, or in goods like handwoven bags made out of palm leaves.

“We build the PowerWells in Brisbane but eventually we hope to manufacture them in Indonesia.  Next year, we’re also planning to expand to Vietnam, where we have partners already keen to help through donating solar panels and other support.”

At home, businesses like Bligh Tanner and Technology One have also come on board and hosted corporate workshops for staff.

“We go in and talk about the PowerWells concept and get people to help make them – they literally break apart batteries and build the PowerWells, and they get to learn about where they will go and there is ongoing tracking of their impact,” Mr Kamols said.

“It is a fun teambuilding activity that has a tangible impact through repurposing waste and providing basic electricity. They have been received really well and we’re starting to get pretty decent demand for them.”

The Planning Institute of Australia praised the social enterprise in naming Mr Kamols its Queensland 2021 Young Planner of the Year, saying he was helping inspire other young planners to pursue entrepreneurial ventures.

Mr Kamols’ current PhD project is taking his entrepreneurial skills to the next level by investigating how cities can employ regenerative design to provide the infrastructure for circular economies.

He said he had wanted to be an urban planner since early high school.

“It’s a great career for young people to consider because of the big picture impact you can have,” he said.

“The impact you have through the built environment flows in to all aspects of our world.  One of the most important things we do is think about and plan for the future.  Our work is about being deliberate in where we are going, not reactive.”