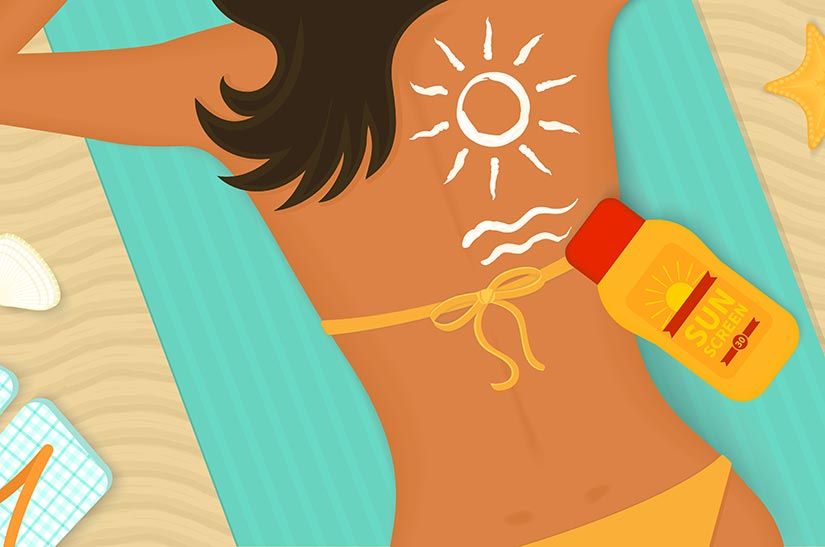 Do you remember the song “Wear Sunscreen”?  The words to “Wear Sunscreen” were originally written as a hypothetical commencement speech by columnist Mary Schmich, originally published in June 1997 in the Chicago Tribune.  It became the basis for a successful spoken word song released in 1999 by Baz Luhrmann, “Everybody’s Free (To Wear Sunscreen)”, also known as “The Sunscreen Song“.

If you remember this song, then like me, you are probably a Gen X. You are also likely to be learning to appreciate the unique characteristics of Gen Y (also known as the Millennials, the Tech/Net/Digital Generation or Echo Boomers). Gen Ys are the demographic cohort following Gen X. There are no precise dates for when the generation starts and ends, but most agree that they range from the early 1980s to around 2000.

I have had the pleasure of coaching many Gen Y, and my observations of them are that that they are energised, creative, crave stimuli and continually seek that ‘something new’. After all, they have been born into the information age, where the world is constantly connected and technology is integrated into our way of life. Therefore I would like to share some of my observations and thoughts about Gen Ys, based upon my own personal experiences in coaching, leading and working with them. My hope is that this might bridge the generational gap and assist my fellow Gen Xers to better understand and leverage our experiences to help guide Gen Ys as future leaders. However, in the spirit of the song “Wear Sunscreen”, I make the following disclaimer:

“If I could offer you only one tip for the future, sunscreen would be it. The long-term benefits of sunscreen have been proven by scientists whereas the rest of my advice has no basis more reliable than my own meandering experience. I will dispense this advice now…” 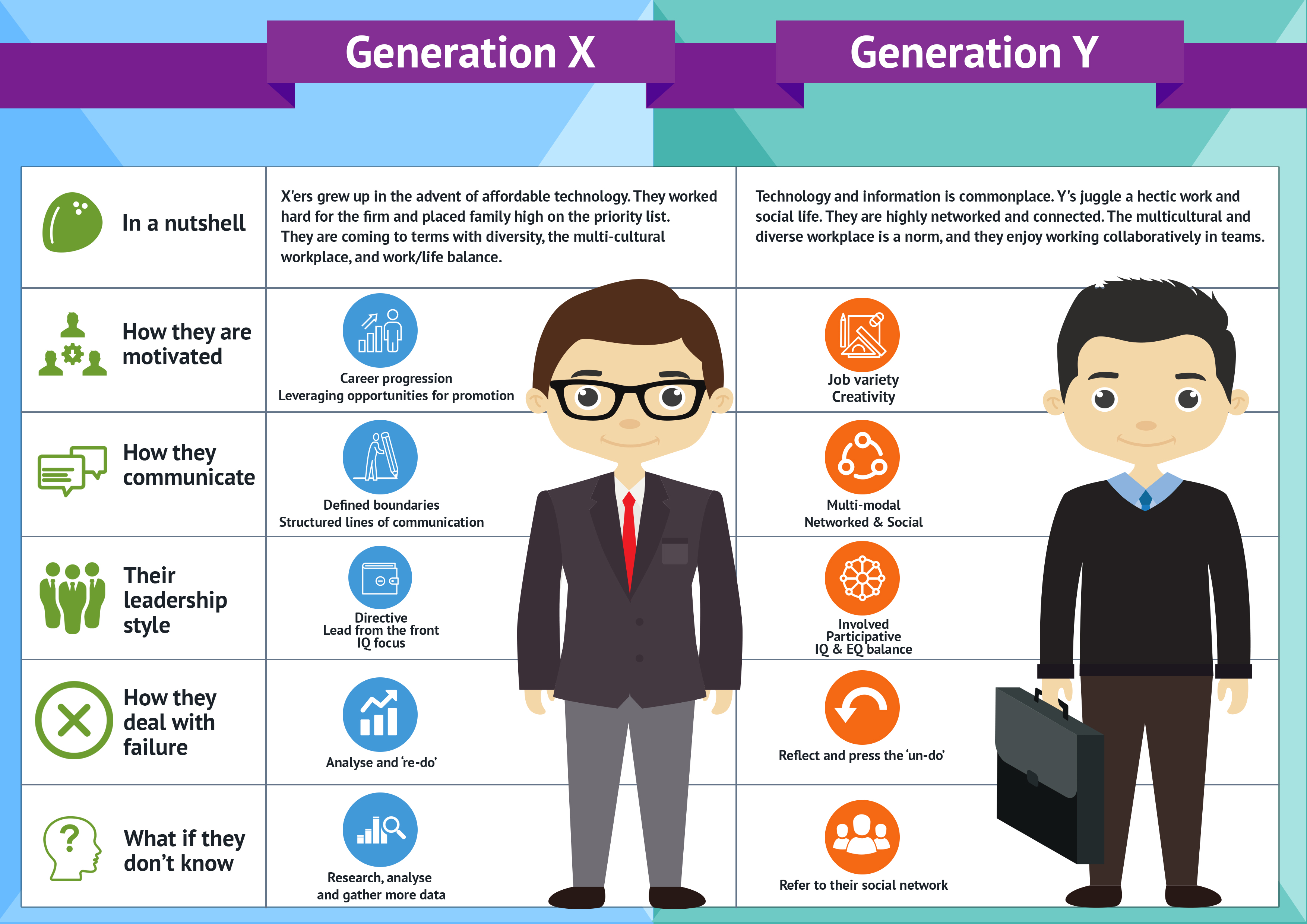 For Gen Ys, their jobs matter…and so do their social lives. They are committed to their jobs and they are loyal to their employers, providing that this doesn’t impact the quality of their lives outside work. As many are not tied up with family commitments just yet, they enjoy the richness of experiences and adventures that life has to offer, often seeking friends and colleagues to share these with. At work they respond well to a challenge providing that they are offered the flexibility and freedom with which to experiment, collaborate and be creative. Constraining Gen Ys with tight boundaries and rules is the quickest way to disengage them. I believe that Gen Xers would do well to undertaking reverse mentoring from Gen Ys as a glimpse into the future by learning about what motivates the next generation of leaders and possibly pick up a few tips and tricks about how to keep the future workforce interested and engaged.

Gen Ys enjoy travelling and connecting with people, and consequently they have very large social networks. The ease, the speed and the multi-modal nature of modern communications is a given, never having to wait to get home to connect with family and friends in far away places. Being raised and educated during the technology boom, they expect instantaneous access to information (no more library trips to search for the answers in Encyclopedia Britannica). Gen Ys have made multi-tasking an art form. They are the proponents of digital integration, with the smartphone representing the incorporation of telecommunications, notebooks, applications and utilities in a streamlined and portable device. Texting appears to be the most favoured form of communication for Gen Ys, often replacing speech or face-to-face interaction.

Gen Ys have grown up in a time where Gen Xs were coming to terms with the differences between management and leadership. Alongside this, we invested our time coming to understand the different styles and models of leadership as we gradually evolved out of our industrial era thinking. Consequently Gen Ys have spent many of their formative years influenced by the advent of Goleman’s concept of emotional intelligence (EI), where the importance of a leader’s relational skills was touted be to as important, if not more important than their intellectual abilities.

For Gen Ys, leadership is about connecting cognitively, where their response to referent power is more influential and compelling than positional power. It has become quite clear to me that Gen Ys do not respond well to a hierarchical style of leadership. Rather, their freethinking nature values a leadership style that is consultative, enabling and collaborative in nature. They seek a balance between EQ and IQ, and respond well to a coaching style of leadership, where the ‘leader as coach’ recognises the value of a participative and co-creative approach.

Gen Ys grew up in an era where they were often told that there was no such thing as a stupid question. They were also told that they could be whatever they wanted to be, and accomplish whatever they set their minds to. Therefore it is not surprising that Gen Ys come armed with an abundance of self-confidence, a ‘can-do’ attitude and a focus on developing themselves professionally and personally. Whilst some Gen Ys that I have coached and worked with are able to accept failure as a part of the learning process, many take it very personally, the latter case reminding me of a term I recently heard: “Millennial Fear of Failure”. Interestingly, many do not hesitate in openly admitting to this.

Failure is a part of life, and I believe the differences in how Gen Ys deals with failure are associated with how it has been framed in their minds. I suspect that many parents of Gen Y children who didn’t want them to live the hard life have shielded them from the difficult experiences and mistakes that are necessary in teaching us to work through challenges and difficulties. They were encouraged to do their absolute best at school every day and to beat the competition, and praised when they won. However, I question how much praise and encouragement is appropriate. Much has been made of the fact that Gen Ys have been one of the most praised and encouraged generations in history, and there is evidence to suggest that too much praise, or at least the wrong kind of praise, can actually be detrimental in learning how to recover from failure.

One of the gifts that I believe Gen Xers can bestow upon the Gen Ys is associated with resilience. The Gen Y response to failure might be to figuratively press the ‘un-do’ button and subsequently find a different idea that is more likely to succeed. I have found that positive support offered to Gen Ys in a collaborative way can turn an ‘un-do’ into a ‘re-do’, and lead them to more successful outcomes based on their original ideas, or modifications to their original ideas.

One of the great strengths that I believe Gen Ys bring to the table is how they navigate uncertainty and an uncertain future. Many are in a process of managing the transition from education to work in a period of global volatility and ambiguity. They undertake this transition by exercising their flexibility, adaptability and responsiveness to the environment. They engage in a world that is powered by information from a variety of sources, and they want to exchange this information in a way which is authentic, open, trusted and in real-time. It follows that the space between the Gen Ys social and professional networks is blurred, as it collectively represents a multi-faceted support system that they turn to when they are unsure, hesitant or simply need reassurance.

Gen Ys have taken networking events, mastermind groups, think tanks, collaboration spaces and the like to new levels. These spaces are highly interactive and collaborative, and where opinions are sought, chewed over and given credence. I believe that Gen Ys possess innate skills in being sensitive and adaptable to our ever-changing environment – something that Gen Xers could learn a great deal from.

“Wear Suncreen” became one of the first viral sensations to hit the Internet in the late 1990s. No doubt the advent of the Internet has become one of the greatest influences on society, offering us a wide range of new opportunities. Having grown up in this era, Gen Ys have been quick on the uptake, continually leveraging technology to push the realms of possibility into new territory. However, like sunscreen (the real SPF50 type), research has demonstrated the vital role that parents have in influencing their children’s sun smart behaviours, despite the myriad of awareness campaigns. Similarly, Gen Xers have the ability to influence Gen Ys as future leaders just as much as technology, information and their own networks. They are the generation who will lead Gen Xers’ children, the Gen Zeds, in the future workplace and in our community. I firmly believe that Gen Ys have a desire to make a positive difference and it is in our interest to guide them in their aspirations.

“Be careful whose advice you buy, but be patient with those who supply it. Advice is a form of nostalgia. Dispensing it is a way of fishing the past from the disposal, wiping it off, painting over the ugly parts and recycling it for more than it’s worth…but trust me on the sunscreen.”