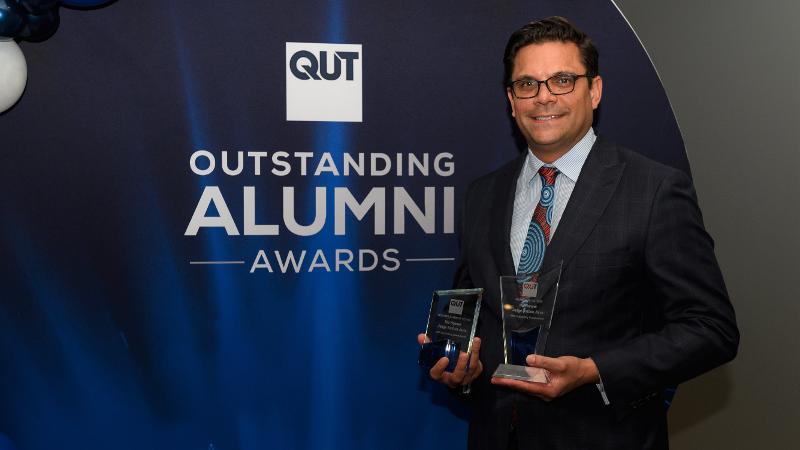 QUT’s 2020 Outstanding Alumnus of the Year is His Honour Judge Nathan Jarro, Queensland’s first Indigenous judge appointed to the District Court of Queensland in 2018.

His Honour Judge Jarro graduated from QUT in 2000 with a Bachelor of Laws and Bachelor of Business (Accountancy) and was called to the Bar in 2004 after practising as a solicitor.

In 2009 he was appointed to the Queensland Civil and Administrative Tribunal (QCAT) and the Children Services Tribunal. He has also served on the Mental Health Review Tribunal.

Excited to announce His Honour Judge Nathan Jarro is the 2020 QUT Alumnus of the Year & winner of the inaugural Indigenous Award! He made history as QLD’s first Indigenous judge & is recognised for his contributions to the legal profession #QUTOAA @qutlaw https://t.co/VHnKNxirOM pic.twitter.com/SYjlkFGXGi

His Honour Judge Jarro, who identifies as Ghangulu on his father’s side and with connections to Bidjara on his mother’s side, was a part-time member of the Aboriginal Land Tribunal in 2015.

He received the inaugural 2020 QUT Outstanding Indigenous Alumnus of the Year award and has continued his association with QUT on the Faculty of Law’s advisory group, as QUT Council Indigenous representative from 2008 to 2012 and as chair of QUT’s Indigenous Education and Employment Consultative Committee for four years from 2014.

Outside law, he has been involved in Indigenous arts, holding board positions in a number of organisations including Queensland Theatre.

“He is a role model for other young aspiring and practising Indigenous lawyers who has demonstrated core values congruent with QUT’s throughout his career and in his commitment to the university, Indigenous and wider communities,” Professor Hunter said.

The Outstanding Alumni Awards recognise graduates of QUT and its predecessor institutions for exceptional professional and personal achievements and contributions to the local, national, and international community.

His Honour Judge Jarro and previously announced 2020 faculty and other award winners were recognised at an event at QUT tonight.