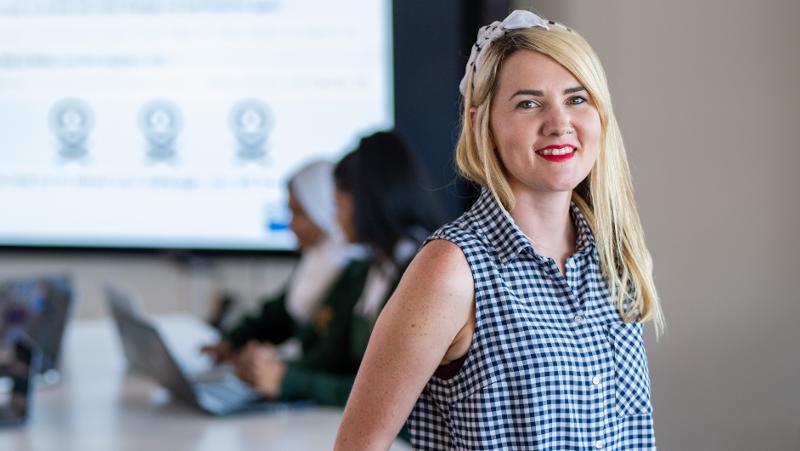 Tammy Butow is really, really good at breaking things.  On purpose.  She’s so good, she’s turned it into a global IT career.

The QUT double degree graduate (Bachelor of IT / Bachelor of Education (Secondary)) and Girl Geek Academy co-founder is one of the world’s best chaos engineers, which means she breaks IT systems to test them – and then works out how to make them stronger.

She has worked for big names like National Australia Bank (NAB) and Dropbox, and now lives in Florida and works as principal site reliability engineer for the Gremlin startup – which was founded by top engineers from Netflix and Amazon.

She also shares her expertise through guest talks for companies like Apple.  (Her speaker profile notes there’s also more to her life than just work … she loves skateboarding, snowboarding, surfing, mosh pits, metal, and hardcore punk).

“I started programming 20 years ago when I was 12 years old – first I made little scripts, then web apps,” Tammy said.

“I had an awesome high school teacher at Riverside Girls High who really inspired me – we are still friends! She also showed us The Net (a cool tech movie).

“My message for girls out there is that you should totally study tech because it’s going to be an amazing career for you. It’s never going to go away, it’s just going to continue to increase and you know why not be there where you can be a pioneer in a really exciting space – that’s the coolest thing to do ever!”

Tammy’s first big job after uni was at NAB in Melbourne where she worked in security in the cybercrime team and also built desktop software and mobile applications.

“Now I specialise in cloud infrastructure and live in America,” she said.

“I absolutely love working on cloud infrastructure because I love working with large scale systems and knowing I am literally helping millions of customers.”

“To me, chaos engineering is preventative medicine,” Tammy said.

“You’re breaking things on purpose with the goal of building more resilient systems.

“It’s a disciplined approach to identifying failures before they become outages.  We proactively use experiments to test how a system responds under stress, and then you can identify and fix the failures before they end up in the news. A lot of these big outages do end up in the press and then your customers are coming at you saying why are you down and when will you be back up.”

While Tammy has built her career in IT, she has also put her education degree to good use as co-founder of the Australian-based Girl Geek Academy.

She founded the academy with fellow QUT graduates to promote tech education and help increase the number of women with successful STEM careers.

Tammy and two of her co-founders, Sarah Moran and Lisy Kane, were recognised for their efforts when QUT named them the 2018 Young Innovation & Entrepreneurship Outstanding Alumni Award Winners.  The trio have also launched a Girl Geek book series for 7 to 12-year-olds.

“The Girl Geek Academy does hackathons, online courses, and workshops on coding, game development, entrepreneurship and startups, and we also work with teachers and schools,” Tammy said.

“We want to see an increase in women in tech, women in games, women who make, female designers and female founders.”

After graduating from QUT in Brisbane in 2008, Tammy was selected for the NAB Technology Graduate program and worked in Melbourne for five years where she learnt the importance of system speed and reliability.

“Mortgage broking systems have to work fast,” she said.

“What you want to do is process faster than all the other banks and then the client chooses you. It’s very competitive so taking longer than 24 hours to process a mortgage application is just not on.”

At NAB, she was also introduced to disaster recovery testing, which led to her interest in chaos engineering.

By 2014, she had decided that her future lay with cloud infrastructure and America’s tech start-up industry and she moved to New York to become DigitalOcean’s platform manager.

A year later, she was approached by Dropbox to lead a hybrid software and systems group at their Silicon Valley headquarters and was then promoted to senior engineering manager, where she led a team of engineers working remotely around the world to keep the platform online.

“For someone coming from a country of 25 million people, Dropbox was amazing because I got to work somewhere where we supported 500 million customers,” she said.

“It was so exciting to be able to build something that so many people use all over the world.

“There are so many artists that use Dropbox too – and I really love music and film.

“While I was working there, Tool (the progressive metal band) did an interview where they talked about how they’d created their album using Dropbox and how they shared the music and lyrics they were writing.  I love metal so much and I thought that was so cool.  It makes you feel good when you are building systems and looking after systems that people are creating really amazing things with.”

At Gremlin, Tammy works as a consultant and also helps create testing software that other engineers can use.

“My job is to be on call and make sure that really important systems stay up and running and don’t lose data so it’s a really big responsibility … But I’m definitely an adrenalin junkie so I am totally okay with that!” she said.

Gremlin is based in California but, thanks to technology, Tammy lives and works 4000km away in Florida (and being able to work remotely at home has been particularly beneficial during the COVID-19 pandemic).

The couple were married in June, after Tammy proposed on a yacht during a trip to Saint Lucia in the Caribbean earlier this year.

“I moved to Fort Lauderdale to live with Colman but it’s also luckily the most Australian place in America – with very similar weather to Brisbane,” she said.

“I love the palm trees, beaches, great food, animals (gators/iguanas!) and, of course, my amazing husband.”

“I grew up in foster care (a group home) and was adopted at eight years old. I had a very different start to life from most,” she said.

“But I think that helped me have the courage to get out there!

“There are so many amazing opportunities, people to meet and places to explore. Living in America it feels like every single day is an adventure. I'm always seeing and learning something new.  And even with so many people stuck home due to Coronavirus at the moment, you can still explore the world through the internet, keep up connections and make new ones.

“I think it's really important to keep in touch with friends.  I'm still very close with my friends from high school and primary school – I speak with them almost every day.  I usually try to visit my friends in Australia regularly, including my Girl Geek Academy co-founders who are all based in Melbourne (Sarah, Lisy, Amanda, and April).

“It's taken me time to figure out what makes me happy and I know I love to be constantly learning, I love being active, and I make time to relax – I love to watch the sunset.  I also stick to my own personal values – to do kind gestures, to make others smile and to volunteer my time to help others. Life is what you make of it.”