Go beyond the sky with a space career 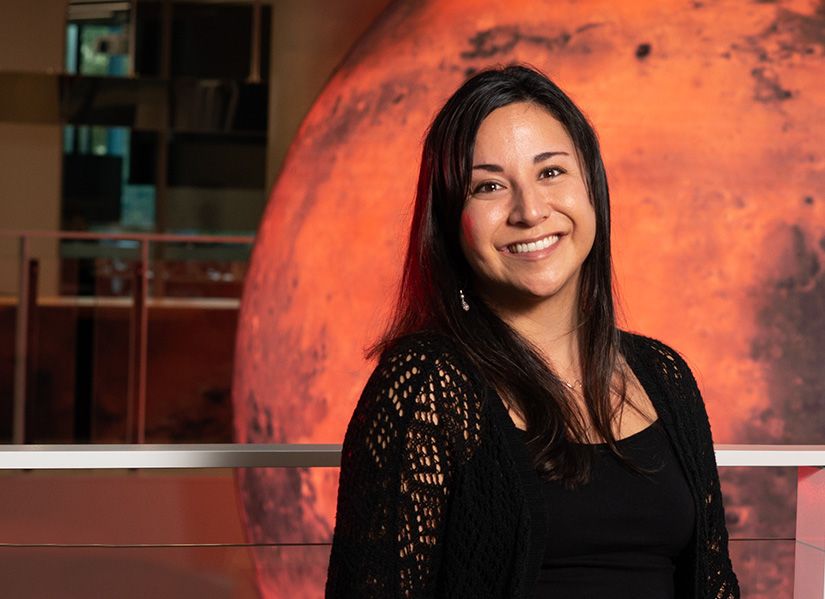 Vanessa Zepeda is a space scientist who has worked at NASA and now looks for signs of life in rocks brought back from Mars as part of her PhD in astrobiology at QUT.

Vanessa, why does space fascinate you?

I think it fascinates everybody, even from childhood. Just the idea of aliens or other worlds out there and whether we're alone in the universe has always fascinated me. My love for biology started here on Earth doing marine biology, and then I became infatuated with the idea of possibly finding life elsewhere other than Earth. That's when I ended up doing astrobiology.

How would you plan for a space career if you were in high school?

There’s so many aspects of different fields of science involved in space, so I would suggest high school students take all of the maths and science classes to get a nice grasp on those. There’s so many things you can do to build up your profile and be introduced into these different areas of STEM, including reading papers and volunteering. It’s never too early to network so try to meet new people, talk to your teachers or reach out to scientists. If you're interested in a space career, science communication is very important. The longer I’ve been at uni, the more I’ve realized that there's this really big gap between the communication of our science to a broader audience. Soft skills such as working with others in groups, being good with communication and just being friendly are all involved as well.

What was the best thing about working at NASA?

When I was at NASA doing my internship, it was before the Rover got sent to Mars so I was actually able to go and see the Rover before it left Earth. It’s quite remarkable to sit in the room thinking ‘wow, I’m looking at something with my own eyes that’s going to be on another planet’. If I was having a rough day, I would just go down to the viewing window and say ‘hi’ to Perseverance. Being able to network with people from NASA and JPL in a collaborative work environment where everybody's working together to accomplish the same goal was great. But seeing Perseverance was probably the coolest thing.

Can you tell us a little bit about what you're doing now and what your current study focus is at QUT?

I work on hydro submarine hydrothermal systems. If you’ve ever seen the deep sea submersibles that go under the ocean on earth, we have these vents that put a lot of nutrients into the water. You have all of these microbes and wild little things living in these environments that would otherwise almost be unhabitable. There's two types: black smokers that are associated with a specific type of tectonics and white smokers that are actually more conducive for life. Here in Western Australia, there's some of the oldest preserved crust left on Earth so it has evidence of hydrothermal systems that were active 3.4 billion years ago. I go out there and collect these really, super old rocks. You can just crush up these rocks and do all types of really high-tech stuff that helps you learn about the environment. You can learn about if there was any microbes present, the composition of the atmosphere, the ocean chemistry, whether or not that hydrothermal system was in a shallow or deep water environment. I study these ancient environments because they could reveal where life might have gotten started here on our planet. I also look for biomarkers - signs of life that have been preserved in the rock record. The idea is that eventually Perseverance is going to bring rocks back from Mars to Earth and we're going to do some of these high-tech advanced techniques here in person that we can't do with the Rovers. To have samples that have been on another planet come back to you to study is amazing.

What's next for you? After your PhD, what would be your ultimate dream job?

The plan has always been to go back to JPL and do my postdoc. I’m a marine biologist first and foremost. I love the ocean. I became fascinated with astrobiology when I learned that there's moons in our own solar system that actually have oceans on them. They're covered with ice but there's oceans underneath. I really want to go to those moons and see what's under the ice. NASA is planning various missions to Enceladus and Europa – these are moons of Jupiter and Saturn where there is evidence of potential for life. So that would be my dream job: to be a mission scientist on some of those missions to do astrobiology related research on those moons.

Published in collaboration with Careers with STEM.