QUT physicist and leading international air quality and health researcher Professor Lidia Morawska has been elected a Fellow of the Australian Academy of Science, an acknowledgement of her outstanding contributions to science and society.

The Director of QUT’s International Laboratory for Air Quality and Health in the Science and Engineering Faculty and an advisor to the World Health Organization, Professor Morawska is one of 24 new Fellows announced today.

Academy Fellows are among the nation’s most distinguished scientists, elected by their peers for ground-breaking research and contributions that have had significant and lasting impact.

The Academy said Professor Morawska was recognised as one of the world’s foremost authorities on airborne particulate matter in the context of atmospheric pollution and its sources, as well as impact on human health and the environment. Her diverse research involves significant applied studies in radiation, environmental and atmospheric physics.

Her research team has delivered new tools to detect and analyse ambient particulate matter, such as the portable and compact KOALA sensor, and provided new insights into human exposure to air pollution, including key emission sources, physio-chemical processes and interactions in both indoor and outdoor environments.

They have expanded scientific understanding of the droplets that humans exhale, their characteristics and how the droplets disperse when someone sneezes or coughs, which is critical in dealing with infection spread. 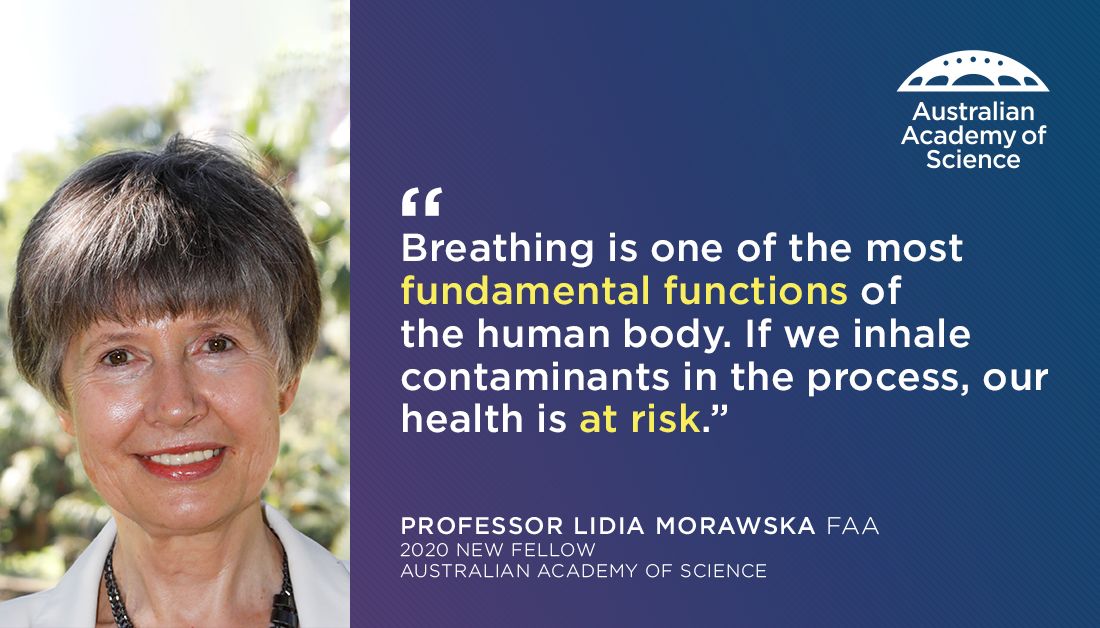 “It’s an area that crosses disciplines and which can serve and benefit people,” she said.

“Breathing is one of the most fundamental functions of the human body. If we inhale contaminants as we breathe then our health is at risk.

“I am proud that my research has helped to make people aware of the health risks of airborne contaminants and provided guidance on how to prevent and to minimise these risks.

“I am also very proud to be admitted to the Australian Academy of Science.”

The Academy was founded in 1954 by Australian Fellows of the Royal Society of London, with the distinguished physicist Sir Mark Oliphant as founding President. It provides independent, authoritative and influential scientific advice, promotes international scientific engagement, builds public awareness and understanding of science, and champions, celebrates and supports excellence in Australian science.