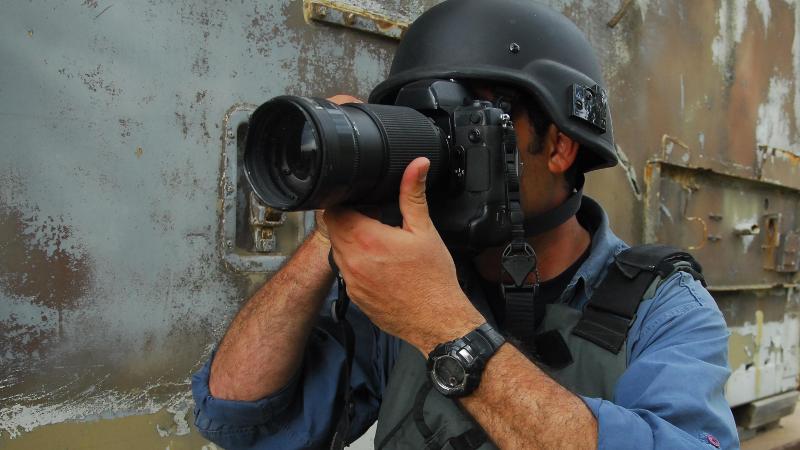 So far in 2019, 27 media workers worldwide have been killed in wars, political unrest and acts of terrorism. Their names join those of thousands of others killed in the past three decades while many more have been imprisoned, kidnapped, beaten or threatened.

The deaths are recorded by the International Federation of Journalists (IFJ) which releases an annual report on journalists and media staff killed in the course of their duties. In 2018, the figure was 95.

On Tuesday September 17, QUT, in association with the Australian Army’s 7th Combat Brigade, will hold a service to commemorate war correspondents and war artists at historic Parer Place in the Creative Industries Precinct on the Kelvin Grove campus, now the site of a permanent memorial for fallen media workers (pictured at bottom). Parer Place is named after the famous Australian war photographer and cameraman Damien Parer (Below right: Copyright: Australian War Memorial. Order 11684903, who was killed in the Pacific Islands campaign during World War II. "QUT has held Remembrance Day observances at the site since 2011. These have been welcomed by the media and university communities, as well as ex-service personnel who had links with the Kelvin Grove campus when it was an important military base,” said Professor Gene Moyle, Acting Executive Dean of QUT's Creative Industries Faculty.

"Parer Place is part of the former Gona Barracks which has historic associations with the despatch of troops to both the first and second world wars. Several former army buildings have been restored and incorporated into the university complex.

“QUT is proud of this heritage and it is most apt considering our role in preparing journalists and other media workers for their careers, including those that end up covering conflicts. Our journalism alumni include award-winning foreign correspondent Peter Greste and the ABC’s Leigh Sales and Connor Duffy.

“QUT’s commitment to training future film and television staff, journalists and artists is as strong today as ever.”

Professor Moyle said the service on 17 September would mark the 75th anniversary of Damien Parer’s death. Attendees will include Victoria Cross recipient and general manager of Seven Queensland Ben Roberts-Smith who will lay a wreath of behalf of the network while reporter Shannon Marshall-McCormack will do the same on behalf of Nine News Queensland.

The event begins at 10am and is free to the public to attend. RSVP by 12 September to ciexternalrelations@qut.edu.au Additional information from the International Federation of Journalists:

The IFJ, the world's largest organisation of journalists, represents 600,000 media professionals from 187 trade unions and associations in more than 140 countries.

The most dangerous countries for journalists in recent years have been Egypt, Iraq, Syria, India, Somalia, The Philippines, Pakistan, Afghanistan, Palestine and the Ukraine. As well as death, journalists, photographers and others trying to report on events risk imprisonment and torture.