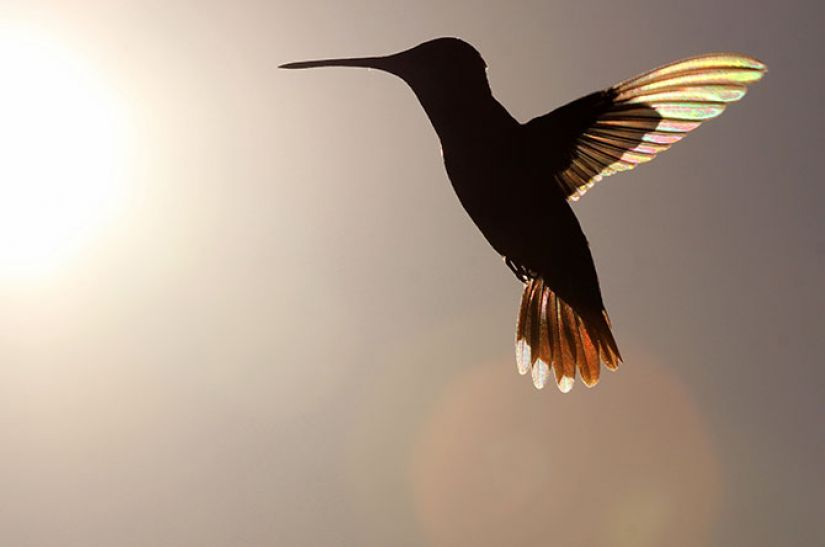 Hummingbirds derive their name from the humming sound created as they beat their wings. They hover in mid-air at rapid wing-flapping rates, typically around 50 times per second, which creates frequencies that are audible to humans: a hum! However, what is truly fascinating about this is how the hummingbird evolved their ability to hover in mid-air.

Sometime during the Cretaceous age (about 100 million years ago), flowers began to evolve colors and scents. This signaled the presence of pollen to insects, which correspondingly evolved sophisticated means to extract the pollen and, inadvertently, fertilize other flowers with pollen. Over time, the flowers supplemented the pollen with even more energy-rich nectar to lure the insects into the rituals of pollination. Bees and other insects evolved the sensory tools to see and be drawn to flowers, just as the flowers evolved the properties that attract bees.

The co-evolution between flowering plants and insects that led to the production of nectar ultimately created an opportunity for much larger animals — the humble hummingbird — to extract the nectar. In order to do this, the hummingbird had to evolve a highly unique form of flight mechanics that enable them to hover alongside the flower in a way that few birds can even come close to doing. In other words, they had to learn an entirely new way to fly.

These complex chains of interconnected events define the hummingbird effect. Although derived from the famous butterfly effect concept from chaos theory – Edward Lorenz’s famous metaphor for the idea that a change as imperceptible as the flap of a butterfly’s wings can result in an effect as grand as a storm far away several weeks later, the two concepts differ in a very fundamental way:

The hummingbird effect demonstrates that an event in one field can trigger completely unexpected outcomes in wholly different domains. This connectivity cannot be predicted or planned, and it is only knowable in retrospect. It represents the characteristics of complexity; its behavior is a non-linear evolution through the interaction of many factors that cannot be planned or controlled, and through which new and novel possibilities are revealed.

Nature loves complexity, and there is a lot that we can learn from it. We live in an increasingly unstable and unpredictable world with a rate of change that is only increasing. Many events we encounter almost always come as a surprise because things these days don’t happen as a planned and controllable process. Connections are made by accident, there are unintended consequences and seemingly unrelated factors come together to form completely new possibilities. Second-guessing the outcomes in a planned or analytical manner is difficult because when people or things or ideas come together in new ways, an evolution occurs. In fact serendipity can serve as a silent partner in the process of emergent change as many notable ideas and innovations have come about as the byproduct of an unplanned and an unexpected set of circumstances. Just consider for a moment…

The microwave oven was conceived from a melted candy bar, saccharin from an accidental chemical spill, and conventional film chemistry was discovered when mercury vapors from a broken thermometer unexpectedly developed a photographic image. Unplanned events happen, and we’re all better off because they do.

Probably the most famous example of accidental innovation is Alexander Fleming’s discovery of the antibiotic properties of penicillin. Fleming unintentionally left a dish of Staphylococcus bacteria uncovered for a few days and returned to find the dish dotted with bacterial growth, except in one area where a patch of mold (Penicillium notatum) was growing. Fleming himself said of this event:

"I did not ask for a spore of Penicillium notatum to drop on my culture plate, and when I saw certain changes, I had not the slightest suspicion that I was at the beginning of something extraordinary."

Innovation can’t always be planned and accidents happen that lead us down entirely different pathways. The key here is to be open-minded to the unexpected and recognise serendipitous opportunity. Here are some suggestions on how to enable innovation to emerge through leveraging complexity:

Sometimes genius arrives not by choice but by chance, and nature has a way to make these seemingly strange leaps of evolution, like when the sexual reproduction strategies of plants end up shaping the design of a hummingbird’s wings. Had there been naturalists around to observe the insects first evolving pollination behavior alongside the flowering plants, they would have logically assumed that this strange new ritual had nothing to do with avian life. And yet this chain of events ended up precipitating one of the most astonishing physical transformations in the evolutionary history of birds. Although the traces of those original influences often remain obscure, they are nevertheless retrospectively detectable with the passage of time. The retrospective knowability of the hummingbird effect offers us insights and learning as to how to manage and navigate our way through complexity and, along the way, reveal new ideas, innovations, and astonishing possibilities to us.

Herein lies the remarkable power and reach of the hummingbird effect.