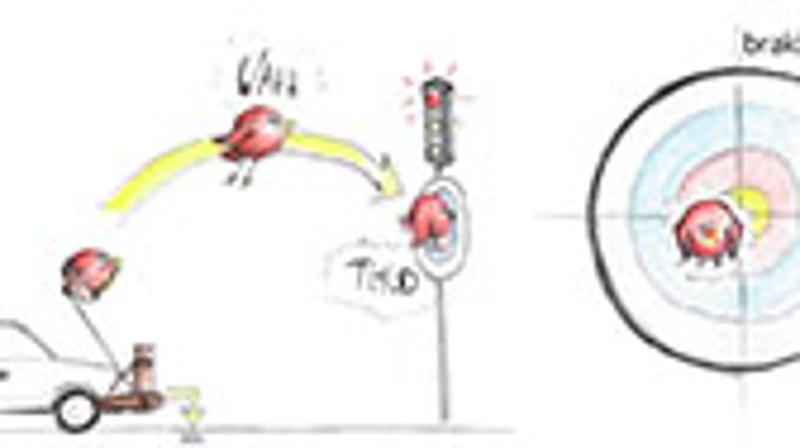 Young males are prone to boredom behind the wheel, according to a QUT road safety researcher who is looking to use gadgets and games behind the wheel to make risky drivers safer on the roads.

"Rather than demonising technologies like smart phones, Google glasses or head-up displays like those used by jet pilots to allow transparent images to be displayed on the windscreen of planes, my research is using these devices to provide fun and engaging stimulation that replaces the urge for risky driving behaviours," Dr Schroeter said.

"For example, imagine an angry birds-type scenario where you have birds on your windscreen hitting or missing a bulls-eye dependent on your driving performance when braking at a red traffic light. This basically turns every red light into a playful driving game."

Dr Schroeter said young males were over-represented in road crashes with young drivers representing a quarter of all Australian road deaths, but accounting for only 10-15 per cent of the licensed driver population.

"One-third of all speeding drivers in fatal crashes are males aged 17-25, compared to females the same age who make up just six per cent of the crash statistics," he said.

"Part of the problem is that many young males are sensation seekers, which also means they are prone to boredom, a hardwired or in-built personality factor that can lead to risky driving.

"So rather than trying to change their personality, which is extremely difficult to change, I am accepting they are likely to always be easily bored and come up with strategies to keep them engaged about the actual driving - in particular mundane or boring driving situations like approaching red lights.

"What my study aims to do is take a new approach to this problem and use technology to make safe driving more stimulating and fun."

As part of his research, Dr Schroeter wants young male drivers from Brisbane aged 18 to 25 to take part in an online survey that looks at how they drive and how prone they are to boredom. The study will also test selected drivers in CARRS-Q's Advanced Driving Simulator.

"Research has shown that if the driving environment is not providing enough stimulation, young male drivers may seek sensations by taking risks," he said.

"This sensation seeking behaviour not only includes increasing speed or other risky driving manoeuvres, but can also lead to diverting attention away from the driving task, for example by using a mobile phone."

"Up until now nobody has ever looked into making driving less boring with the view to make driving safer and that is what my research is aiming to do," he said.

"By using a head-up display that provides exciting driving-related content, it is hoped that we can firstly divert young drivers' attention away from distractions and back towards the road, and secondly by gamifying or rewarding safe driving behaviour, we motivate them to take less risks."

Dr Schroeter is also urging anyone with an idea for an interesting "driving game" that turns a mundane boring driving scenario into a fun experience, to tweet it with the hashtag #riskygadgets

To take part in the study, visit http://carrsq-survey.urbaninformatics.net