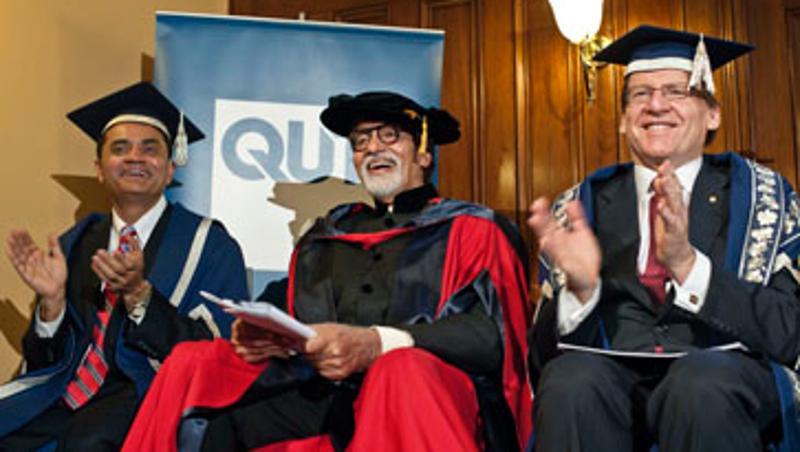 Amitabh Bachchan, who has starred in more than 180 Bollywood films, said he was humbled by the experience to receive the honarary doctorate.

"A good education is the most valuable thing a human can possess. In the world beyond these walls fortune comes and goes but education can never be taken away," Mr Bachchan said.

"Education helps us to strengthen and fortify convictions not to be swayed by preoccupation of caste and creed, race and religion."

Mr Bachchan, who will tomorrow launch a Creative Industries Bursary in the name of his late father Dr Harivansh Rai Bachchan, said he hoped that his trip to QUT would help to strengthen bonds between Australia and India.

"I feel very honoured they have chosen to name this bursary after my father. I think it is a wonderful gesture of inter-country relationships, where students from one country go and share the experience in another country and vice versa. I am happy it's happening between India and Australia," he said.

"Any form of higher education is very useful in today's world... I have many friends in India who send their kids to Australia to study and I know they are very happy.

"I do believe large numbers of Indian students seek education in Australia and I hope that continues to grow."

The intimate ceremony was given a touch of Hollywood with renowned Australian Director Baz Luhrmann appearing via video link to personally congratulate Mr Bachchan, who this week finished filming a scene for The Great Gatsby, alongside Leonardo DiCaprio.

"I've been an admirer of Baz Lurhmann and his films Moulin Rouge and Romeo and Juliet. I think he's magnificent not just in the subjects he picks but his own interpretation of them on film. He has a unique style and each of his works are a piece of art," Mr Bachchan said.

"I hope to come back here one day and work with him again."

The ceremony, which took place two years after Mr Bachchan declined the honour due to the attacks on Indian students in Victoria, said he was satisfied that now was the appropriate time to accept the offer.

"It's been a very warm welcome. I've only been seeing smiling faces and experiencing great hospitality. That was something that was an aberration and it's over now," he said.

"To find myself in a foreign country, and to have this recognition from them is truly amazing. I do not have enough words to thank you for having bestowed on me this great honour. I value it a lot."