Ready for the robotics revolution? You should be. 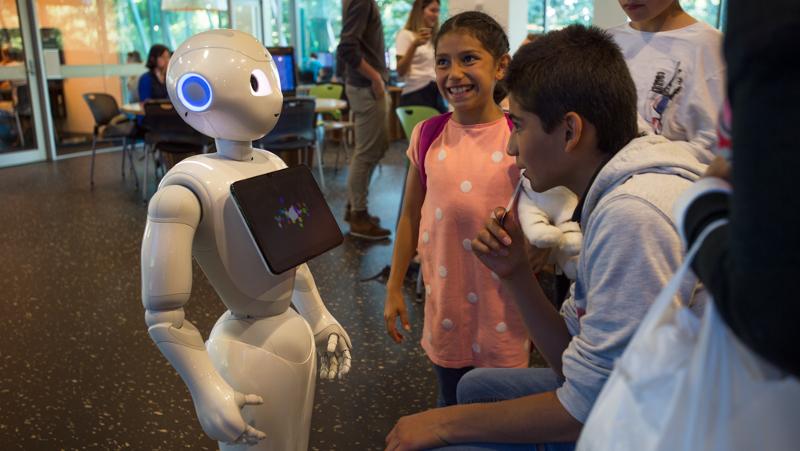 The robotics revolution has arrived - and it’s far friendlier than you think.

It’s working with the Queensland Government and Australia subsidiary of Pepper’s maker SoftBank Robotics, ST Solutions Australia, to explore the different applications and effectiveness of social robots across a range of settings and conditions than until now have been the sole domain of humans.

QUT’s Pepper research program leader Belinda Ward said Pepper gives the impression of intelligence, mimicking human behaviours such as following the conversation around it by looking at whomever is talking.

“Social robots like Pepper have real potential to change society - and by just how much is the basis of our new research program,” said Ms Ward, from the Science and Engineering Faculty and Australian Centre for Robotic Vision.

“Pepper is probably the most ‘personable’ robot on the market in terms of its perceived emotional intelligence, which makes it a fantastic platform to investigate the suitability of social robots, which is still a very new field.

“Pepper’s social behaviours help people to relate to it more easily. You can see that in the way the public is drawn to it when it visits The Cube.

“What we learn from human-computer interactions with Pepper will inform the next generation of service robots, building an effective social component into their task-oriented programming.

“While a social robot in every home is probably a long way off, I see a place for social robots supporting human staff in every hospital, aged care facility and classroom, as companions and helpers – and there are no doubt many more settings we haven’t even considered yet.

“We are currently working with members of the healthcare industry to gather their thoughts on where Pepper could make a real difference.”

Queenslanders will get the chance to see Pepper in action at Robotronica, QUT’s free robotics and AI spectacular on Sunday August 20.

QUT’s Gardens Point campus will be packed with robots - from those that operate on you to those that draw pictures for you.

Robotronica visitors will also get a crash course in robotics coding when QUT launches Code-A-Bot onto The Cube, the world’s largest interactive educational display space.

Code-A-Bot is a two-storey, interactive digital game in which players program robot workers to collect and sort rubbish in a virtual waste recycling plant.

Creator and Cube Studio Manager Sean Druitt said the game could be played individually or in teams, the goal being to create the most efficient recycling plant.

“For most people, Code-A-Bot will be their first chance to play with basic coding so we’ve used a Scratch-inspired simplified coding system to help people pick up the concepts quickly,” said Mr Druitt.

“Our team of game development, robotics and education experts have ensured this installation links directly with the Australian Curriculum and is backed by a series of fun and informative workshops student groups can access.”