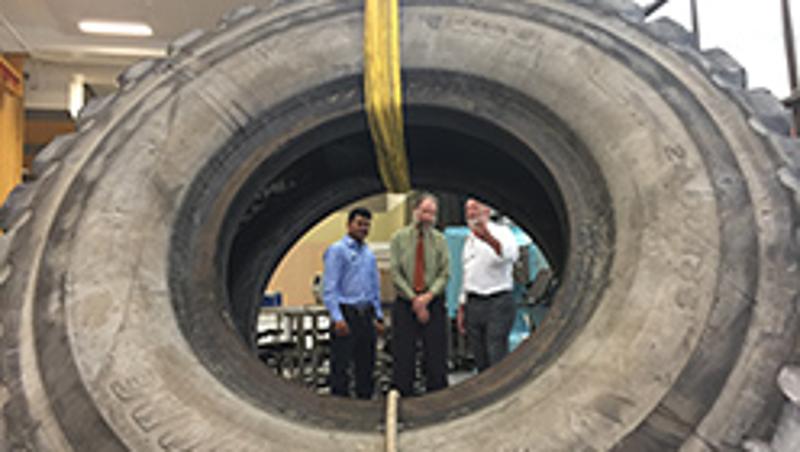 Old tyres can be completely recycled into lower emission diesel engine oil, instead of being dumped in dangerous, highly flammable stockpiles that become breeding grounds for malaria and dengue-carrying mosquitoes.

Professor Brown said that when the oil was blended with diesel it was found to produce a fuel with reduced emissions and no loss of engine performance.

“Getting rid of old tyres in an environment-friendly way is a universal nightmare.

“Stockpiles of used tyres around the world are a health hazard, as demonstrated by the recent Broadmeadows fire in Victoria, which was difficult to put out and generated huge amounts of toxic smoke.”

“We tested the oil which GDT produces from both recycled natural and synthetic rubber tyres in 10 per cent and 20 per cent diesel blends,” Mr Farhad said.

“We tested the tyre oil blends in a turbocharged, common rail, direct injection, six-cylinder engine in the Biofuel Engine Research Facility at QUT.

“The engine is typical of engine types used in the transport industry.

“Our experiments were performed with a constant speed and four different engine loads of 25, 50, 75 and 100 per cent of full load.

“We found a 30 per cent reduction in nitrogen oxide which contributes to photochemical smog, and lower particle mass which means fewer problems for emission treatment systems.”

GDT chief  operating officer Trevor Bayley said the oil could also be used as a heating fuel or further refined into automotive or aviation jet fuel.

“The process recycles end-of-life tyres into oil, carbon and steel, leaving nothing wasted and even uses some of the recovered oil as the heat source,” Mr Bayley said.

“We are delighted at the findings of the QUT research as it will help us promote the sustainable use for end-of-life  tyres.

“The potential of this source of biofuel feedstock is immense, and it is more sustainable than other bio-oils from plants such as corn, or algae.

“GDT plans to have the first fully operational commercial plant delivering eight million litres of oil a year from mid-2017, followed by a world-first mining tyre processing plant in either Qld or WA.”

About Green Distillation Technologies: GDT is an Australian company which has developed world-first technology to recycle end-of-life car and truck tyres into carbon, oil and steel. The company won a bronze medal in the world’s top innovation award, the Edison Awards, last year.