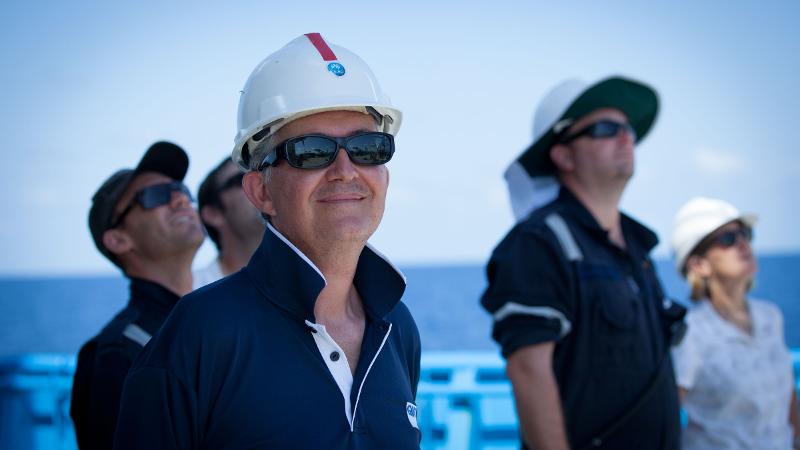 A world-first, scientific voyage to study the air over the Great Barrier Reef aims to determine if coral creates rain.

Professor Zoran Ristovski, from QUT’s Science and Engineering Faculty, is leading the multinational team of scientists on the first-ever study of airborne particles (aerosols) on the Great Barrier Reef, one of the world’s biggest ecosystems.

He said findings from Australian Research Vessel Investigator’s month-long voyage would be crucial to understanding the reef’s role in rainfall and to the development of more accurate climate change modelling.

“A key aim of the voyage is to investigate the role coral plays in emitting cloud-forming particles into the reef’s atmosphere,” Professor Ristovski said.

The RV Investigator is part of CSIRO’s Marine National Facility. It is equipped with state-of-the-art, aerosol analysis laboratories and will be matched with a mobile, land-based laboratory at Mission Beach to capture and compare airborne particles from the reef as they travel over land and interact with North Queensland’s rainforest atmosphere.

“The Great Barrier Reef is the world’s largest coral reef but we still do not know for sure if coral is a significant source of the biogenic particles in the atmosphere over the reef that are instrumental in forming clouds,” Professor Ristovski said.

“Aerosol particles play an important role in regulating global climate by scattering and absorbing radiation from the sun and by taking up water vapour from the atmosphere to start cloud droplet formation.

“Corals produce high concentrations of a compound called dimethyl sulphide (DMS) that is capable of forming cloud-seeding particles but no one as yet has studied their impact on the atmosphere above the reef.

“Our scientific team will gather, measure and characterise these coral-produced particles in the air over both the reef and the adjacent rainforests.”

Professor Ristovski said that until now it was thought that ocean algae and phytoplankton were the main marine sources of DMS contributing to rain cloud formation over the ocean.

“But since the discovery that hard corals themselves also produce large amounts of DMS, as well as that produced by the algae that grows symbiotically in the coral, it is vital to know just how much coral contributes, especially as the reef’s coral is degrading.

“When corals are under stress, such as from increased sea surface temperatures due to climate change, they produce variable amounts of DMS.

“Understanding the part that coral particles play as the coral degrades will allow us to better predict effects of climate change on the reef ecosystem.

“It will also improve our understanding of the process by which ocean water evaporates, rises into the air, becomes part of a cloud and falls as rain to earth.”