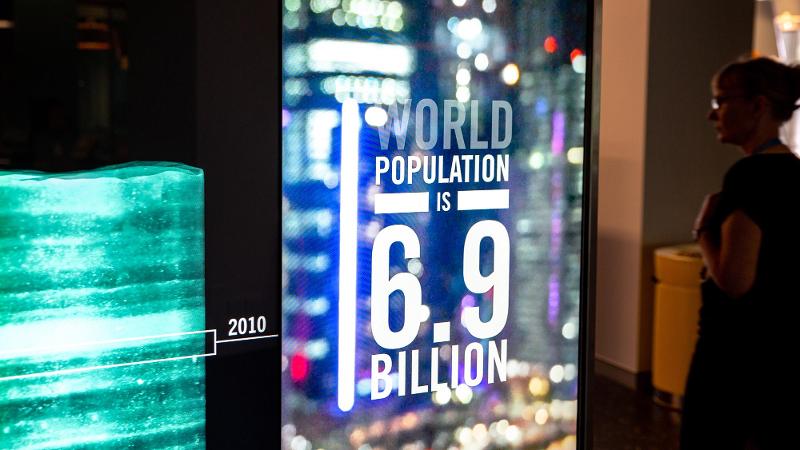 Tasmanian artists Jerome Dobinson and Amanda Kay’s new artwork, commissioned by QUT and featuring the earth’s glacial history, has been a 'life-changing' journey that became very much a family affair.

The couple has created The Great Acceleration using The Cube’s soaring two-storey touch screen as its canvas exploring climate change and the human impact on earth.

By replicating the earth’s ice cores the visual display lets viewers scroll through time using their fingertips to understand changes in atmospheric conditions for the past 200 years.

The display comes as the United Nations warns governments humanity is running out of time to save itself from climate change, at the COP 25 summit is held in Madrid.

“The artwork has a sense of approachability to it that can cut through confusion surrounding climate change,” Mr Dobinson said.

“People can relate on an individual level to what would normally be scientific and heavy-going charts and statistics to find relevant information that affects them as individuals.”

The exhibition has been designed for all ages with scientific information supported by the Hobart-based The Australian Antarctic Division which coordinates and leads scientific research in Antarctica and the Southern Ocean.

A photo library supplied by the US National Science Foundation Ice Core Facility, an organisation that helps explain the effects of global warming, enabled the artists to create a 3D-modelled ice core to match The Cube’s interactive setting.

As QUT’s latest artists-in-residence, the couple said the project had a profound impact on them personally, involving their 12-year-old son Sen, who helped create some of the content and was involved in the creative process.

“At first, we were getting emotionally affected by the information,” Ms Kay said.

“The physical interaction with the work, even though the topics are weighty, can hopefully personalise the experience so people can come to terms with climate change as individuals.”

Mr Dobinson said the family plans to relocate from Tasmania to Brisbane where he will undertake a Doctor of Creative Industries (DCI) at QUT’s Design Lab in 2021.

“It’s been a family affair and it’s been a life changing experience,” Mr Dobinson said.

“I think if people can take one snippet away from the exhibit it is for them to reflect upon their relationship to the planet.”

The Great Acceleration is inspired by 24 global indicators or known as “planetary dashboard”, first published by the international geosphere-biosphere programme (IGBP) in 2004 and reassessed and updated in 2015.

The Great Acceleration will be screened at The Cube regularly on Mondays, Wednesdays and Sundays until 23 December.

Next year the project will go into rotation with the other digital projects. Check Cube screens for screening dates.