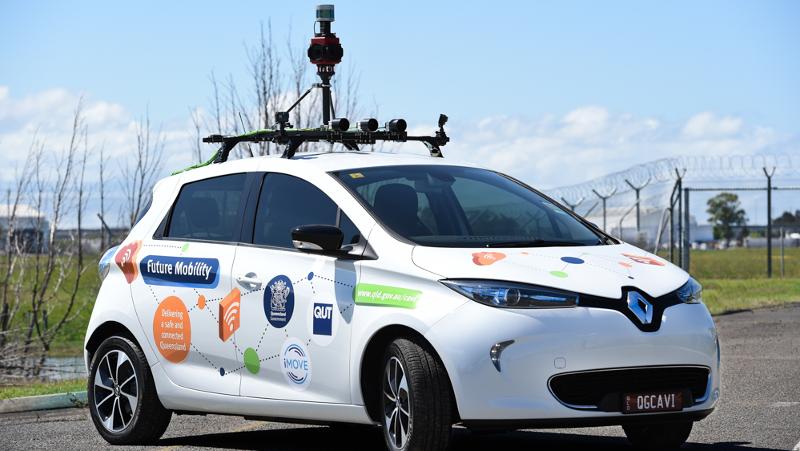 QUT researchers will take an Artificial Intelligence (AI) system on a road trip of south-east Queensland to ensure the autonomous cars of the future will be smart enough to handle tough Australian road conditions.

Professor Michael Milford will lead a team of researchers from the Australian Centre for Robotic Vision in a project that could help shape the future of road infrastructure.

The project, which is part of the Cooperative and Highly Automated Driving (CHAD) Pilot run in partnership with Queensland Department of Transport and iMOVE Cooperative Research Centre, involves a driver taking an electric Renault fitted with high-tech sensors and computers on a 1200km road trip including a wide range of road and driving conditions.

“During this trip, you could say AI will become our ultimate back-seat driver,” Professor Milford said.

“Engineers at QUT’s Research Engineering Facility have developed a research car platform equipped with a range of state-of-the-art camera and LIDAR sensors used on autonomous vehicles.

“So, as we drive, AI will watch and determine if it could perform the same as a human driver in all conditions.

“The big problem that faces autonomous vehicles right now is that at the moment they don’t drive as well as humans in all possible conditions.

Minister for Transport and Main Roads Mark Bailey said understanding AI technology was an important step towards getting automated cars on Queensland roads.

“This road trip will help us gain a better understanding of our future infrastructure needs,” Mr Bailey said.

Professor Milford said current autonomous car systems, when faced with some of the road conditions Australian drivers deal with daily, either refused to go into autonomous mode or hand control back to a human driver.

This research project will look at how an autonomous vehicle’s artificial intelligence systems copes with Australian road conditions in four main areas: lane markings, traffic lights, street signs and how to determine a vehicle’s exact position despite errors that occur with GPS systems in highly built-up urban areas or poor reception areas such as tunnels.

Professor Milford said past studies and his team’s initial experiments show that autonomous cars could have difficulties on rural roads which often lacked lane markings on the side or even a centre line.

“A human driving down a rural road knows to stick on the left and they infer or imagine that there is a line in the middle of the road,” Professor Milford said.

“But they will also cross that imaginary line to go around obstacles quite freely. That’s very hard for an autonomous car.”

Professor Milford said early testing of the system had already revealed how a paint spill on the road from the back of a truck could confuse a self-driving AI system into wrongly identifying it as a lane marking.

During the 1200km of testing spread over three months, the research team will assess the car’s AI data each day to analyse how it responded to the road conditions, lane markings and road signs.

“Robotics and AI are ultimately about enhancing human life in some way,” Professor Milford said.

“The primary goal of our research is to determine how current advances in robotic vision and machine learning – the backbone of AI – enable our research car platform to see and make sense of everyday road signage and markings that we, as humans, take for granted.

“So, safety is an obvious off-shoot, but not the focus of this particular study. What’s important is understanding how AI performs and potential improvements to both the technology and physical infrastructure as the autonomous car revolution unfolds.”

The pilot project is part of the Queensland Government’s wider Cooperative and Automated Vehicle Initiative (CAVI).

Expected to run for 12 months, the this Pilot will assess the degree to which modern sensors and AI techniques used on autonomous vehicles can interpret and understand signage and road markings to inform future development and investment in infrastructure.

“We’ll be out on the roads day and night and in all weather conditions to be sure AI is put to the ‘real world’ test,” Professor Milford said.