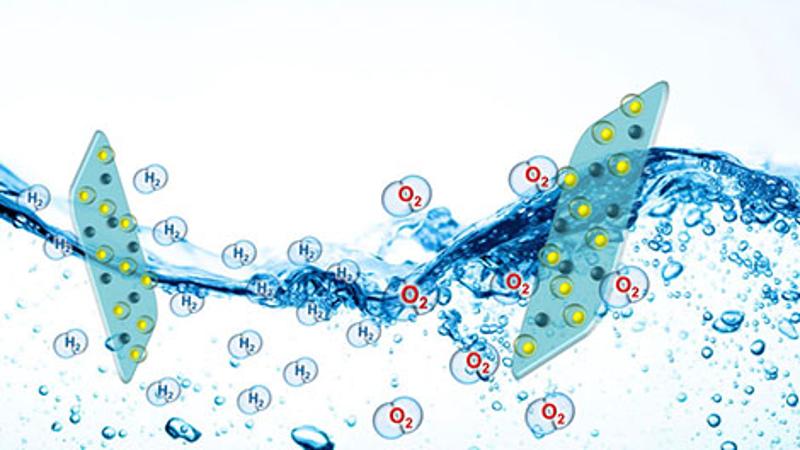 QUT chemistry researchers have discovered cheaper and more efficient materials for producing hydrogen for the storage of renewable energy that could replace current water-splitting catalysts.

Professor Anthony O’Mullane said the potential for the chemical storage of renewable energy in the form of hydrogen was being investigated around the world.

“The Australian Government is interested in developing a hydrogen export industry to export our abundant renewable energy,” said Professor O’Mullane from QUT’s Science and Engineering Faculty.

“In principle, hydrogen offers a way to store clean energy at a scale that is required to make the rollout of large-scale solar and wind farms as well as the export of green energy viable. “However, current methods that use carbon sources to produce hydrogen emit carbon dioxide, a greenhouse gas that mitigates the benefits of using renewable energy from the sun and wind.

“Electrochemical water splitting driven by electricity sourced from renewable energy technology has been identified as one of the most sustainable methods of producing high-purity hydrogen.” “An additional problem has been stability, especially for the oxygen evolution part of the process.

“What we have found is that we can use two earth-abundant cheaper alternatives - cobalt and nickel oxide with only a fraction of gold nanoparticles – to create a stable bi-functional catalyst to split water and produce hydrogen without emissions.

“From an industry point of view, it makes a lot of sense to use one catalyst material instead of two different catalysts to produce hydrogen from water.”

Professor O’Mullane said the stored hydrogen could then be used in fuel cells. “Fuel cells are a mature technology, already being rolled out in many makes of vehicle. They use hydrogen and oxygen as fuels to generate electricity – essentially the opposite of water splitting.

“With a lot of cheaply ‘made’ hydrogen we can feed fuel cell-generated electricity back into the grid when required during peak demand or power our transportation system and the only thing emitted is water.”

“Gold Doping in a Layered Co-Ni Hydroxide System via Galvanic Replacement for Overall Electrochemical” was published in Advanced Functional Materials.