Could the manufacture of the integrated circuits and chips for our everyday electronic devices be made simpler, safer and cheaper simply by being able to switch coloured light on and off?

Researchers from QUT, Germany’s Karlsruhe Institute of Technology (KIT) and Belgium’s Ghent University have stepped towards this by pioneering a system that modulates visible, coloured light to change the reactions of a powerful chemical coupling agent.

Their findings have been published in Nature Communications.

Images and video can be downloaded here.

Professor Barner-Kowollik said the ability to use visible light as a remote-controlled on/off chemical reaction switch opened up possibilities for future industry applications in chemical and advanced manufacturing, including computer chip fabrication.

“At the moment, ultraviolet (UV) light, which has shorter wavelengths than light in the visible spectrum, is used in industry to drive chemical processes,” he said.

“Industrial processes making use of less harmful visible light are scarce – a sharp contrast to what occurs in nature.

“For plants, visible light plays a critical role in chemical processes. Trees harvest light during the day and use this as an energy source to grow, releasing oxygen in the process. At night, however, when light is no longer available, the chemical process is altered and plants release carbon dioxide.

“We’ve been inspired by such natural processes and designed a completely light-switchable chemical reaction system for the first time.” 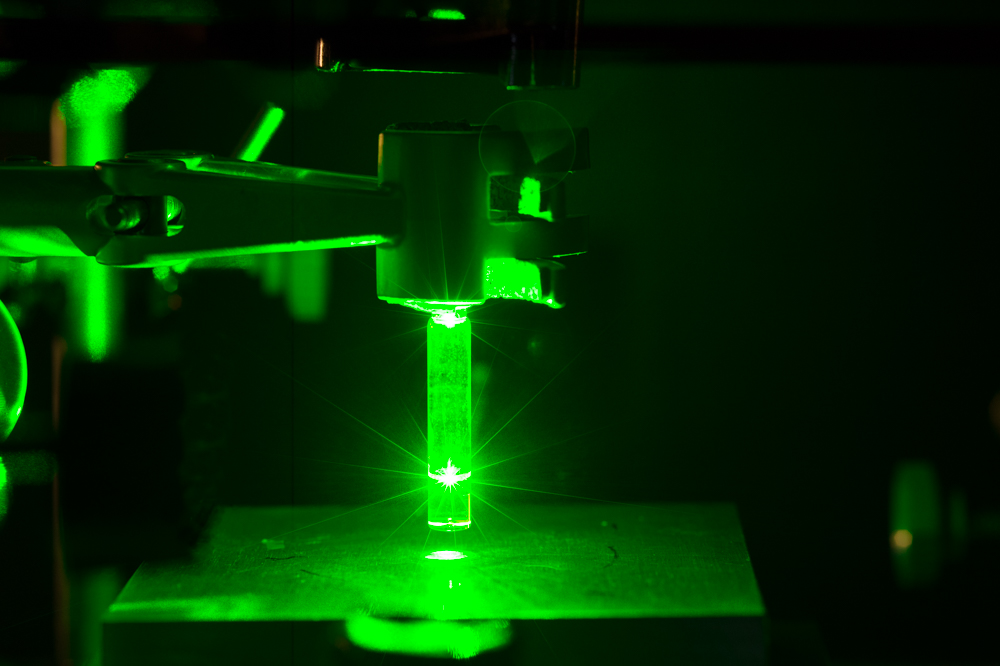 The research team said their system may be applied to create light-sensitive materials for 3D laser lithography, allowing printing of very small structures that could be used in such things as computer chip fabrication. 3D laser lithography is a type of 3D printing with direct laser light, and used for creating very precise structures in the micro range, such as scaffolds for cells.

“Contemporary chip fabrication is a complex, and expensive, system of chemical processes,” Professor Barner-Kowollik said. “Here, due to the so-called light diffraction limit, radiation with short wavelengths – which is very harsh UV light – is used.

“But what if we could use visible light to reversibly switch certain chemical processes and get around the light diffraction limit and print very, very small structures, for example five nanometres wide?

“Being able to switch chemical reactivity within 3D laser lithography could revolutionise chip printing, and make it cheaper, simpler and safer.

“There are substantial barriers to overcome, but potentially the system we have devised with visible light as a chemical deactivation mechanism could provide an avenue to achieve that.” The paper, Controlling Thermal Reactivity with Different Colors of Light, can be accessed here.

The published findings are among the first research outcomes of the Australian Research Council (ARC) Australian Laureate Fellowship awarded to Professor Barner-Kowollik this year.