Eight First Nations students graduated with law degrees from QUT on Monday, marking the largest cohort of Indigenous students to graduate from the Law School in its history.

The recent graduates, six graduating with Bachelor of Laws (Honours) and two with Master degrees (Research), celebrated their achievements alongside their key supporters and reflected on their journey so far, and goals for the future.

Officially completing their studies in December last year, it not only makes history for the Law School, but will be the last graduating cohort under the Faculty of Law after the pandemic forced a rescheduling of their ceremony.

With graduate jobs secured in top-tier law firms, pathways to admission mapped out, and a wide range of career options from advocacy to the Queensland Police Service ahead of them, these QUT Law School alumni have a lot to celebrate.

Through a unique faculty-based support program coordinated by Bianca Hill-Jarro these students not only represent a history-making cohort for the university but have become a tight-knit group who have forged strong connections and will remain a valuable support network for each other for years to come.

“All of these students managed their studies while participating in a range of opportunities including mooting, taking on leadership roles within not just the QUT community but the broader community as well. Often balancing family, work and community responsibilities alongside clerkships or internships has given them a wide range of experiences that complement their academic studies,” Bianca said.

The aim of the program is to provide end-to-end support for First Nations students studying Law from orientation to graduation, connecting meaningfully with industry, and delivering peer mentoring.

“Completing a law degree is an incredible achievement, and I’m very excited to see what the next chapter brings for each of the students. I know for many of them their successes are shared and could not have been realised without the support of their families and communities. It has been my absolute privilege to be a part of all their journeys. I look forward to seeing them contribute as alumni,” she said. Darci Perry a proud Wiradjuri woman who grew up amongst the Iningai people relocated to Brisbane from Longreach to complete a Bachelor of Laws (Honours) with QUT.

“My year 12 graduating class at Longreach State High School had 35 students. Eight completed the OP stream, and I was the only Indigenous student of the group. Since then, I’m the only student of my entire high school class to graduate from tertiary education.”

Looking back, Darci remembers how disorientating it was when she first moved to Brisbane and how far she has come since then. “Prior to university, I had only been to the Queen Street Mall twice in my life and had never taken public transport. It took me a while to adjust to the bright lights, noise, and sheer numbers of people that you see in a day just on campus being more than lived in my hometown,” she said.

Four years on and with her Bachelor of Laws (Honours) complete, she has goals to join the Queensland Police Service and will be undertaking her Graduate Diploma of Legal Practice with QUT this year.

“Uni is a great place to challenge yourself as it is extremely fast-paced, and you have to rely on your own resilience and motivation to study. I have gained not only academic skills from completing my degree but also a lot of social and organisational skills as well.” Wyatt Cook-Revell has family connections to the Birri Gubba, Gurang Gurang, Wangan Jagalingou and Wakka Wakka peoples. He is the eldest of seven siblings and was born and raised on Yugara country.

Wyatt commenced a Judge’s Associateship earlier this year and has secured a graduate role with Ashurst, a leading Australian law firm that will commence in 2022.

He closed his address with a call to action for his fellow graduates. "Fellow graduates, we each have our own story – a story that even our closest confidants may never know. We must value one another. We must support one another. We must respect one another. All while loving ourselves. In the future, when people are needed to balance those scales – to avoid injustice - I trust that you will be there. On behalf of this graduating cohort, we thank QUT for strengthening our capacity to be there at that moment – and be informed," he said. Tia Shadford has secured a graduate position with a top-tier Brisbane law firm.

With family connections to the Wakka Wakka People from the Cherboug region and the Waanyi People from Lorne Hill, Tia hopes to inspire other young Indigenous women to reach for their goals. “Though people may doubt you, and you may even doubt yourself and your own abilities at times, hard work most definitely pays off! The fact that I am able to hold this degree is evidence of that, in and of itself. I hope that my story shows that there is nothing that hard work and motivation cannot achieve, and that it inspires young First Nations People to believe that they are capable of succeeding in whatever career choice that they choose to pursue,” she said.

Tia credits the support she received from her family and friends for playing a big part in her achievements to date, “Obtaining this law degree was nothing short of a challenge, and the enormous amounts of support my immediate family and friends offered me throughout my degree was significant for me reaching this point. Perhaps, most significantly, I would like to thank my mother. I would not be in this position today if it weren’t for her constant, unwavering support and belief in me and my abilities. I am also thankful to every person at QUT who has assisted me in getting to this point, I could have never anticipated the immeasurable support that came from just knowing that I was not alone.” 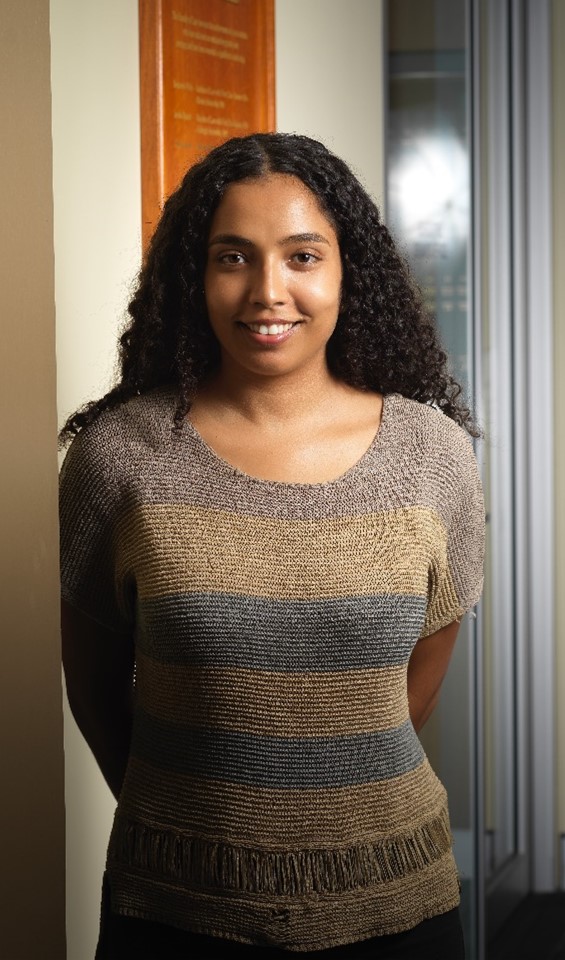 After five years practising as an Intellectual Property Lawyer at McCullough Robertson Lawyers, Stephanie Parkin, a proud Quandamooka woman, returned to QUT for postgraduate study to complete a Master of Philosophy. She is one of two Indigenous Higher Degree Research students to graduate from the School of Law.

Her Masters research focused on the issue of fake or inauthentic Aboriginal art and craft products in the souvenir market. Inauthentic art and craft has existed in the Australian marketplace for decades and consists of souvenir products that have the visual appearance of being in Aboriginal ‘style’, however they are entirely manufactured (usually overseas) and sold without the consent or involvement of an Aboriginal person.

Stephanie’s research revealed how such fake products exploit cultural expression, are representations of ongoing colonialism, and how they impact Aboriginal and Torres Strait Islander people - in their own strong and very clear words. The thesis looked at the ways in which the law can address the issue of fake art in the souvenir market, while also exploring the colonial influences and power imbalances that contribute to the lack of law reform and change. Born in Townsville and raised in Yarrabah, Queensland Joel Johnson is a proud Gunggandji man. Moving from Yarrabah to Brisbane in 2016 to start his Bachelor of Laws (Honours), Joel looks back on the sacrifices he has made to get to graduation day. “I definitely missed out on spending time with my family. Many weekends were taken up by reading textbooks and writing assignments, but it was worth it. My education will allow me to build a stable life for my family and myself. I want to affect change and achieve positive outcomes for our people and this qualification will give me the foundation to do that,” he said.

With goals to practice as a solicitor, Joel will be commencing his Graduate Diploma in Legal Practice at QUT with plans on being admitted as a lawyer by the end of the year.

As the last serving Executive Dean for the Faculty of Law, Professor Dan Hunter said, “I am incredibly honoured to have been the Executive Dean during this historic moment for the QUT Law School. It is a testament to not only their determination, and resilience of the students to complete their law degrees but also to recognise the critical role law schools play in creating and facilitating diversity within the broader legal profession. Without first graduating First Nations law students, the invaluable contribution and important role that First Nations lawyers will have to the legal industry and legal profession will never be fully realised.”

Find out more about studying Law at QUT here.