A QUT researcher who is using drones and Artificial Intelligence (AI) to monitor the health of the Great Barrier Reef has received backing from software giant Microsoft as part of its US$50 million AI for Earth program. 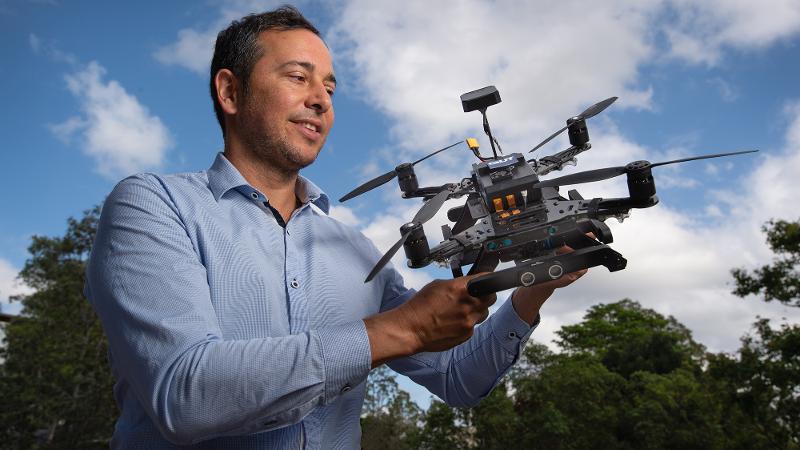 The grant from Microsoft will allow Associate Professor Felipe Gonzalez, an aeronautical engineer from QUT’s Institute for Future Environments and an associate investigator with the Australian Centre for Robotic Vision, to quickly process data of the reef using cloud computing services, saving weeks or perhaps months in data crunching time.

The Microsoft AI for Earth program is designed to use technology to help mitigate and adapt to challenges such as climate change and the catastrophic loss of biodiversity.

Professor Gonzalez, partnering with the Australian Institute for Marine Science (AIMS), has captured data from drones flying at 60m above the Great Barrier Reef at four vulnerable reef locations.

The Great Barrier Reef stretches 2300km with about 3000 reefs, making the challenge of monitoring the condition enormous.

The drone system uses specialised hyperspectral camera which, when validated using AIMS underwater data can not only identify coral against the background of sand and algae but can also determine the type of coral and precise levels of coral bleaching.

Professor Gonzalez said the research in studying the health of the reef using the drones had started two years ago, but the hurdle was in processing the huge amounts of data the drones captured.

“On a regular desktop PC, processing the data will take months.

“You really need to scale up, with the help of cloud services and tools services provided by Microsoft AI for Earth and Azure we can do this within days or hours for the smaller reefs.”

Since the first flight project 18 months ago, in which the drones were used to analyse the health of four coral reefs in the Great Barrier Reef Marine Park, Professor Gonzalez has processed about 30 per cent of the data the drones collected.

The Microsoft grant will allow him to process the rest of the data quickly using Microsoft’s Azure cloud computing resources, including AI tools.

Professor Gonzalez said the drones had already proved to be a successful tool in reef monitoring, able to cover a far bigger area in a day than in-water surveys and not hampered by cloud cover which impacted surveys by plane or satellite.

“You could never get this level of resolution with a satellite or an aircraft,” he said.

The evolution of smaller hyperspectral cameras has allowed researchers to use them in a variety of ways, from monitoring the Great Barrier Reef to developing the accurate methods for detecting diseases in vineyards and invasive weeds. With the reef monitoring program, Professor Gonzalez benchmarked the drone system by using data from AIMS divers that identified coral types and the health of coral species marked on a graded scale.

Professor Gonzalez said processing all of the data from first drone study of the Great Barrier Reef was just the first step in what he hoped would be an ongoing monitoring program, working with AIMS researchers to do follow-up analysis of the same area to calculate changes in the reef’s condition.

Microsoft Lucas Joppa chief environmental officer said: “As a technology company with a deep commitment to sustainability, we understand that our responsibility extends beyond our own operations to innovating towards a healthier and better future more broadly.

“The world is seeing rapid advancements in cloud and AI solutions that are unlocking new possibilities to solve the world’s most challenging problems.  But the uptake of those solutions to understand and protect the planet is proceeding slowly, and as such, we are essentially flying blind when it comes to understanding how our planet is changing and how to best solve environmental challenges. AI can change that.

“Time is too short and current human resources are too few to solve urgent climate related challenges without the exponential power of AI. By putting AI in the hands of researchers and organisations we can use important data insights to help solve issues related to water, agriculture, biodiversity and climate change.”