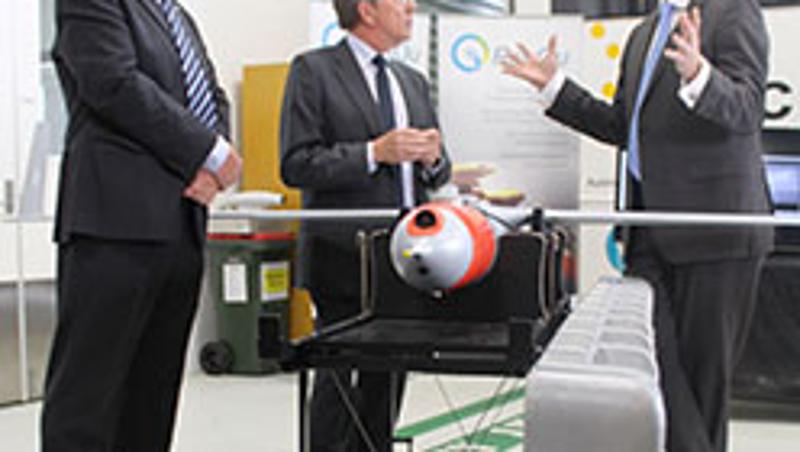 Queensland Unmanned Aircraft System (UAS) researchers have made what's believed to be a world-first breakthrough for small Unmanned Aircraft (UA), developing an on board system that has enabled a UA to detect another aircraft using vision while in flight.

During the flight, the onboard system provided real time warnings back to the ground control station, resulting in a successful manual collision avoidance manoeuvre - a critical point for allowing UAs to fly in commercial airspace. The flight trial was carried out in unsegregated, class G airspace.

The research, carried out by QUT's Australian Research Centre for Aerospace Automation (ARCAA) in conjunction with Boeing Research & Technology - Australia (BR&T-A) and UAS industry leader Insitu Pacific, was successfully proven in recent trials at an airfield north-west of Brisbane.

ARCAA director, QUT Professor Duncan Campbell, put the success of the mission down to high level industry-academic collaboration that brought together some of the best minds in robotic aircraft research anywhere in the world.

"Project ResQu, a two-year project funded by the Queensland Government, QUT, CSIRO, BR&T-A and Insitu Pacific, aims to fast-track the development of smart technologies that will enable unmanned aircraft to fly safely in the civil airspace," he said.

"Ultimately, this will allow UA to provide public services such as assistance in disaster management and recovery, as well as in environmental, biosecurity and resource management."

Professor Campbell said the breakthrough was extremely significant and meant Project ResQu was well on-track to deliver technological advancements and to make regulatory recommendations to the Civil Aviation Safety Authority (CASA) by the middle of this year.

"We have achieved a big step on the road to a viable detect and avoid system here," he said.

"The technology trialled in Insitu-Pacific's ScanEagle UA was based on world-first vision-based sense and avoid technology developed at QUT and successfully tested in our Airborne Systems Laboratory, a Cessna light aircraft, a couple of years ago," he said.

"The challenge worldwide has been to develop an onboard system of appropriate size, weight and power usage for a small UA."

Insitu Pacific managing director Andrew Duggan said the company was proud to be at the forefront of the development of technology for the safe integration of UA into commercial airspace.

"The team continues to make excellent progress in developing and fielding a world leading system for the safe integration of UAS into commercial airspace. We have a unique capability here in Australia and Queensland specifically to field this technology in viable UAS operations for civilian customers."

Professor Campbell said the ultimate use of UAs in civil airspace would be regulated by CASA, and that the sense and avoid technology being developed could ultimately have much broader application.

"We can see benefit in the use of this technology in general aviation as a detect and avoid aid to the human pilot," he said.

"The final technical hurdle to UA operating in civil airspace is their ability to land safely in an emergency and our collaborative research is expected to make significant strides towards overcoming this hurdle, too, in the coming months."

Project ResQu is a $7 million project supported by the Queensland Government and involves some of the nation's top aerospace experts drawn from QUT, BR&T-A, Boeing subsidiary Insitu Pacific and CSIRO.

ARCAA is a specialist research centre of the Queensland University of Technology (QUT). ARCAA conducts research into all aspects of aviation automation, with a particular research focus on autonomous technologies which support the more efficient and safer utilisation of airspace, and the development of autonomous aircraft and on-board sensor systems for a wide range of commercial applications.