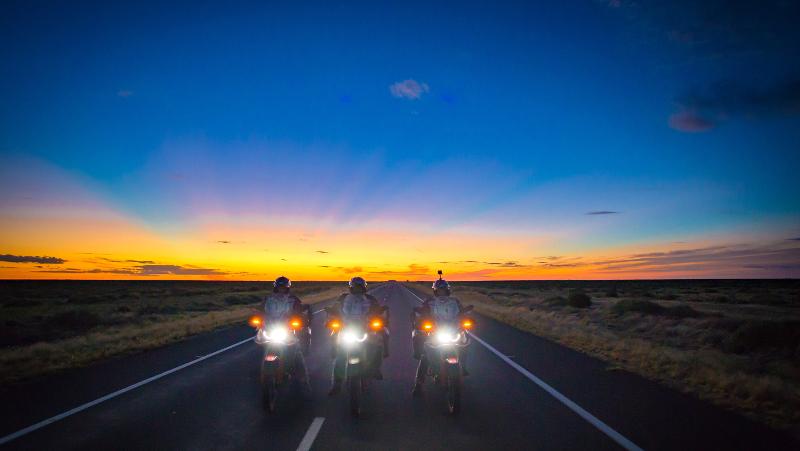 A QUT filmmaker followed the extraordinary journey across Australia’s notorious Strzelecki Track by a 70-year-old and his sons on adventure motorcycles during a record heatwave to produce an internationally acclaimed documentary.

Filmed and directed by Joe Carter, who coordinates the film and television degree within QUT’s School of Creative Practice, The Strez is having its premiere public cinema screening on Monday 17 January at New Farm Cinemas. The event is particularly special as the star and unexpected hero of the film (now 71-year-old Neville Carter) will be watching it for the first time thanks to COVID borders opening.

The Strez follows two former motocross-racing brothers - Chris Carter (Senior Lecturer in the School of Creative Arts at USQ) and Justin Carter (Program Coordinator of Game Design at USC) - who take their father from Byron Bay to Adelaide across the Strzelecki Desert via the 472 km unsealed rural road that links the towns of Lyndhurst to Innamincka in the northeast of South Australia. The brothers also co-produced the film of a journey began as a search into some long-lost family history. An emotional rollercoaster with unexpected twists, the epic adventure film was transformed into what Joe Carter describes as ‘a truly inspirational and unintended story of fathers, sons, bakeries and burning the past’.

The online trailer for The Strez has already had more than 30,000 views on Facebook and the film has already garnered 10 international awards including Best Adventure Film in New York, Best Inspirational Film in Cannes and Best Documentary in London.

Joe Carter said he saw the project as an opportunity to shoot some research material for my PhD in Extreme Sports films, but it became something far greater.

“Although we’re not related, I had been mates with Chris and Justin for many years, and when they asked me if I would film a motorcycle adventure they were planning with their dad, I was excited to get involved but no-one could have predicted what happened during the trip which transformed it into an epic adventure film.

“Neville had not ridden a bike for 30 years and there was high drama in a remote part of Australia. It is a very human story and The Strez has now become the core creative practice component of my PhD.”

Mr Carter said The Strez was currently touring global documentary and adventure film festivals, while the film’s distributors are negotiating television broadcasts and streaming in Australia and internationally.