At last: Lonely days are over for historic piano stool 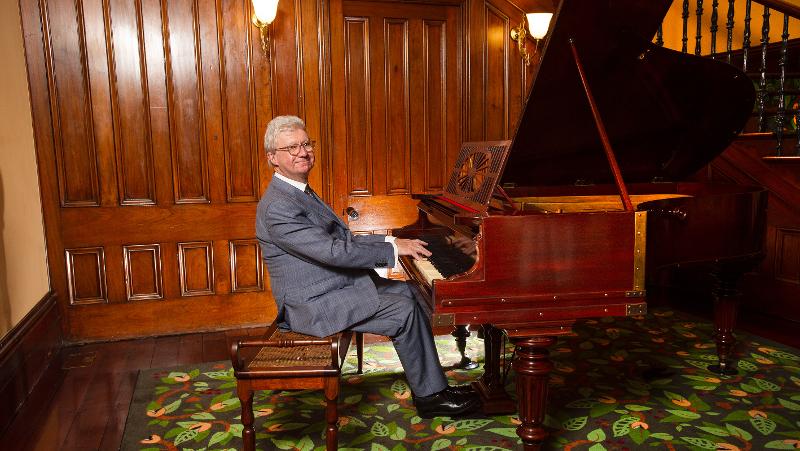 A 116-year-old piano stool has been reunited with its original piano at Old Government House on QUT’s Gardens Point campus after decades apart, thanks to a gift to QUT from Queensland’s 26th Governor.

His Excellency the Honourable Paul de Jersey AC CVO today visited QUT, which is custodian of Old Government House, to see the musical pair back together and receive an official thank you from QUT Vice-Chancellor Professor Margaret Sheil.

He also gave an impromptu solo recital of God Save the Queen.

The mahogany duet stool and Bechstein miniature grand piano were bought in 1906 for Lady Frances Chelmsford, the wife of the state’s 10th Governor, Frederic Chelmsford.

But they were separated after furniture was moved across to the new governors’ residence, Fernberg, in Paddington in 1910 – the stool ended up in a bedroom and the piano in the basement.

The piano made its way back to Old Government House in 1986 after Queensland’s then Governor Sir James Ramsay gifted it to the National Trust for restoration.

A campaign to reunite them began in 2012 after QUT’s eagle-eyed Old Government House curator and historian, Dr Katie McConnel, spotted the stool while walking around Fernberg one day.

“It was being used in one of the bedrooms but I recognised it from old photos of its time at Old Government House – it had the same mahogany and features as the piano I walk past every day,” she recalls.

Twelve years and three governors later, her quest to reunite the pair has had closure.

“His Excellency decided it was ‘unfinished business’ from his term as 26th Governor of Queensland and he was very keen to see them reunited and displayed together at Old Government House,” Dr McConnel said.

“We are very grateful for this gift, as they are both important pieces of Queensland’s colonial history.”

QUT accepted custodianship of Old Government House in 2002 and, after a major restoration project, re-opened it to the public in 2009.

The house was built between 1860 and 1862 by Joshua Jeays, who punted huge loads of sandstone down the Brisbane River from his Goodna quarry.

It served as the residence for 11 Queensland governors and their families.

Governor de Jersey will finish his term on November 1, 2021, when Dr Jeannette Young will be sworn in as the state’s 27th Governor.

Queensland Governors do not participate in the political process, but have a constitutional responsibility to ensure the state enjoys stable government that commands the popular support of the Parliament.

The Governor’s constitutional and legal duties include appointing Ministers of the Crown and summoning and dissolving Parliament.

Old Government House is located on QUT’s Gardens Point campus on the edge of the Brisbane CBD and is open to the public Monday to Friday from 10am to 4pm, and on Sundays from 10am to 3pm.  Admission and tours are free.

The building is also home to the William Robinson Gallery, which opens to the public the same hours.