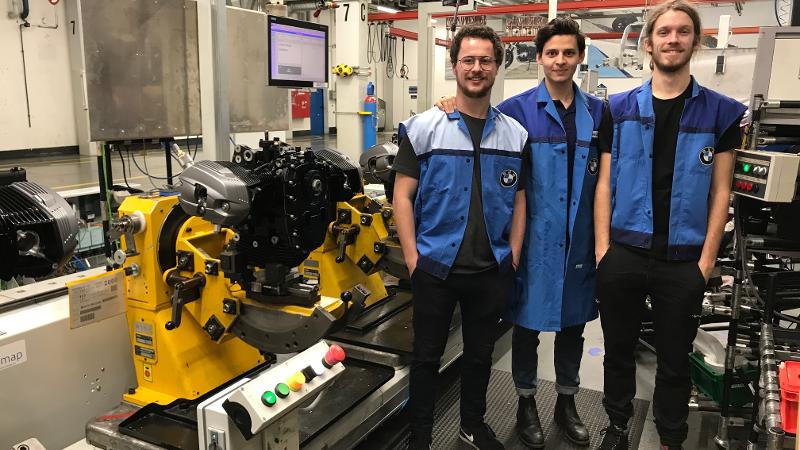 These intelligent, flexible and robust creations are playing an increasingly important role in the Fortune 100 Company and their development is led by a new BMW Group subsidiary with QUT fingerprints all over it.

Launched in November 2020, idealworks began to take shape five years earlier when an in-house product was developed by BMW Group to support goods handling and intralogistics throughout its factories. The AMR was built from the ground up to move containers through the factories and bring material to the production line.

Front and centre in this innovative offshoot of the company was QUT industrial design graduate student Dylan Sheppard who undertook an internship with BMW Group in Munich in 2016 and secured a prestigious lifetime contract with the company. Dylan is now Digital Design Lead for idealworks and is one of 11 QUT industrial design alumni to have been involved with its creation.

idealworks’ AMR, called iw.hub, combines industry-leading computing power from NVIDIA and proven hardware to automate intralogistics workflows in industrial environments. It can ‘see’, plan safe pathways in complex environments, and understand what objects are, how fast they are going, and where they might be heading.

Dr Rafael Gomez, QUT study area coordinator for industrial design and founder of QUT’s BMW Group + QUT Design Academy, said idealworks represented the breadth and depth of the relationship between the company and the university that is a model for how to create a large and significant impact.

“This is as ‘real world’ as it gets. Dylan and other QUT design alumni worked in a team that applied design creativity, knowledge and skillsets to help leverage the STR as a low-cost solution for BMW's automated mobile robot needs for logistics application,” Dr Gomez said.

“In 2018, BMW formed a new team to accelerate the development and refine the functionality of the AMRs. Gathering cross-discipline experts from throughout the company, a new focus began on leveraging embedded computing, enhancing AI intelligence, and forming new partnerships to supercharge the development of the most able, most intelligent, and most reliable AMR in the automotive industry. “This is a solution with global ramifications, not just for BMW Group but for any factory or industrial environment. It’s exciting to know that designers – QUT designers – were at the core of this development.”

Markus Bauer, COO of idealworks said, while based in Munich, the team was global and built upon relationships with world-leading research universities including QUT and industry partners like NVIDIA.

“We drew upon the foundation of work from 1000s of hours of indoor navigation, millions of deliveries, and years of real-world testing in productive BMW plants to focus on redeveloping the core systems powering the AMR and build a product to meet the needs of not only the BMW Group, but other automotive and industrial applications worldwide,” he said.

“Last year, we took the product to market with the official launch of idealworks as a BMW Group subsidiary. Our mission is to make AMRs the norm in everyday intralogistics and drive innovation with customer experience at the forefront of everything we do.”