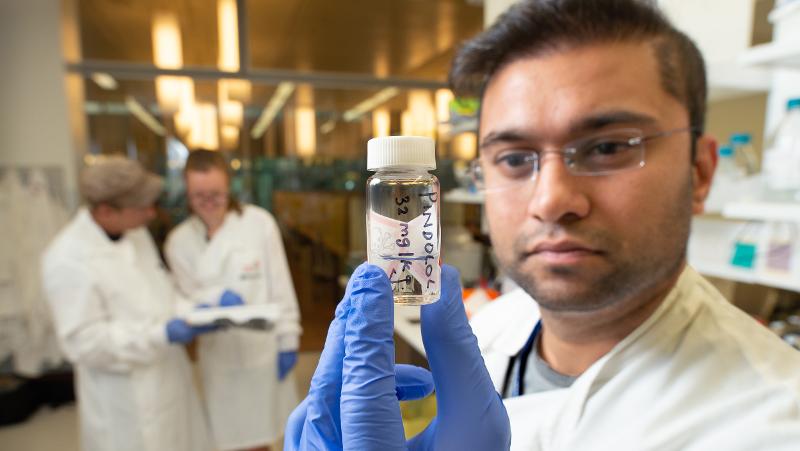 A drug used to treat high blood pressure may alleviate anxiety induced by long-term heavy alcohol use, and also halt the damage such drinking can cause to the brain’s ability to grow new cells, QUT research shows.

The findings, from a study conducted in adult mice, have been published in the journal Frontiers in Behavioral Neuroscience.

Principal investigator and QUT neuroscientist, Professor Selena Bartlett, said the results add further evidence that the drug, pindolol, could be beneficial in treating alcohol use disorders.

“This is a drug that is inexpensive and already available in the US, Canada, Europe, and Australia,” she said. “It’s a beta-blocker that is prescribed for high blood pressure, angina and heart arrhythmias.

“We have been studying it for a number of years and have already shown in animal models that it reduces alcohol intake when there is long-term consumption.

“In this latest study, we investigated the drug’s effect on other alcohol associated issues –  anxiety and neurogenesis.

“Long-term and heavy drinking can cause anxiety disorders, and people’s anxiety can worsen when alcohol is withdrawn, and alcohol abuse can also reduce neurogenesis, which is the process by which new neurons (cells) are formed in the brain.

“We showed that pindolol reduced alcohol-associated anxiety-like behaviour in mice and also alleviated the damaging effects of alcohol consumption on newly formed and immature brain cells.” Professor Bartlett said repurposing drugs like pindolol was a way to fast-track new treatments to manage alcohol dependence, binge-drinking and addiction, which are significant and complex problems both in Australia and globally.

The costs to society of alcohol-related problems in Australia in 2010 was estimated at more than $14 billion, including costs to the health system and lost productivity.

“The next step is to conduct clinical trials with pindolol and we have started discussions with a medical specialist to progress that,” Professor Bartlett said.

Professor Bartlett is leader of the QUT Institute of Health and Biomedical Innovation Addiction Neuroscience and Obesity group and is based at the Translational Research Institute.

She is the recipient of the Australasian Neuroscience Society (ANS) Medallion for her contributions to neuroscience as the Lawrie Austin Plenary lecturer at the recent 2019 ANS conference in Adelaide. She also delivered a public lecture during the conference on developing brain resilience to improve health, fitness and addiction.